The coordinators of the Abrahamic Program for Young Adults shared with the Daily their personal reactions to Week Two’s theme of “The Next Greatest Generation.” Comprising of four coordinators representing Judaism, Christianity and Islam, APYA develops programs geared specifically toward generating interfaith dialogue among young adults at Chautauqua Institution.

Week Two of the 2013 Season contains our celebration of the Fourth of July. The national holiday is a magnet for family gatherings throughout the country, and it is no less true at Chautauqua. There will be a fleet of bikes in front of Boys’ and Girls’ Club. Children’s School will be full. Special Studies classes for young people will be fully subscribed. Bestor Plaza will reflect the family orientation of the week during the Community Band concert. There will be boats on the lake, intergenerational foursomes on the golf course, a level of healthy vigor in the fitness center and a noticeably more age-diverse audience in the Amphitheater for the week’s lecture program.

The opening lecture of the week will be delivered by Megan Smith, daughter of year-round resident Joan Smith and vice president of Google[x], the technology company’s advanced products team. Megan spent her summers growing up at Chautauqua.

Megan and her partner, Kara, who works on Wall Street Journal digital technology components and is an editor of the blog AllThingsD, are raising their two children Louie and Alex in California.

One of Chautauqua Institution’s favorite preachers will feel right at home during Week Two’s exploration of “The Next Greatest Generation.” The Rev. Otis Moss III, after all, has a Twitter following about as large as his Chicago congregation and co-authored The Gospel Remix: Reaching the Hip Hop Generation.

The senior pastor of Trinity United Church of Christ in Chicago, Moss describes himself in his brief Twitter bio as “a jazz influenced pastor with a hip-hop vibe committed to the Gospel of Jesus Christ rooted in love and justice.”

Moss returns to the Institution pulpit this week and will preach at the 10:45 a.m. Sunday Service of Worship and Sermon in the Amphitheater. His topic is “Ministry for the Mentally Ill” and his scripture will be Mark 5:1-20.

The Rev. John Buchanan closed the Week Two religious Interfaith Lecture Series themed “2012: What’s at Stake for the Common Good” with a lecture titled “A Sense of the Green.”

Buchanan is the editor and publisher of The Christian Century magazine. He is a Presbyterian pastor and was the moderator of the 208th General Assembly of the Presbyterian Church.

In his lecture, Buchanan said the provision of welfare has historically been a tradition of both the United States and most religions. In a time when American society is increasingly divided by both politics and faith, it is imperative that each citizen remember his or her responsibility lies in ensuring the general welfare and common good.

Buchanan opened his lecture with a story about a trip through the jury duty selection process in Cook County, Ill. Cook County has its fair share of notoriety, infamous for political corruption, greed and a low-ranking baseball team.

“But we do jury duty right,” Buchanan said. 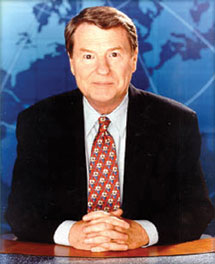 There is a man who wants to know what’s on your mind.

Andrew Kohut, president of the Pew Research Center and director of the Pew Research Center for the People & the Press, has been researching, collecting and analyzing changes and trends in public opinion since the late 1980s. At 10:45 a.m. today in the Amphitheater, Kohut will meet with retired “PBS News Hour” anchor and Week Two morning lecture host Jim Lehrer to open a week of programming titled “The Lehrer Report: What Informed Voters Need to Know.”

“Starting with Andy Kohut, to hear from his leadership from the Pew Research Center, allows us to know what’s on people’s minds,” said Sherra Babcock, director of the Department of Education.

Ann Hood and James Armstrong, the Writers’ Center writers-in-residence for Week Two, return to kickstart Chautauquans into summer by incorporating setting into prose and news into poetry.

Both writers will begin the week with readings of their work at 3:30 p.m. Sunday on the Alumni Hall porch.

“They are able to plug into Chautauqua more quickly than someone who hasn’t been here,” said Clara Silverstein, director of the Writers’ Center. “I think they both seem to really understand what Chautauqua’s all about.”