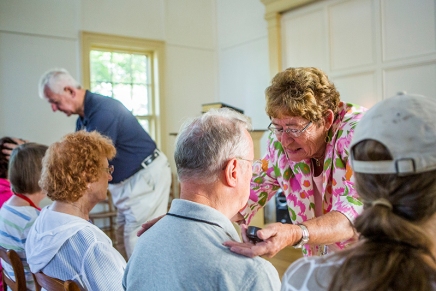 It is 10:15 a.m., and Chautauqua’s morning bustle has begun. The Daily paper boy’s call is accompanied by the shuffle of feet and voices as Chautauquans begin to head for the Amphitheater lecture. It can all be heard from the United Church of Christ Randell Chapel. But the noise seems to fade as Roman Catholic Deacon Ed McCarthy and Jane, his wife, begin the daily Service of Blessing and Healing.

Politicians, religious leaders and environmentalists are buzzing about Pope Francis’ recent encyclical, in which he addresses the “ecological crisis” and anthropogenic climate change. 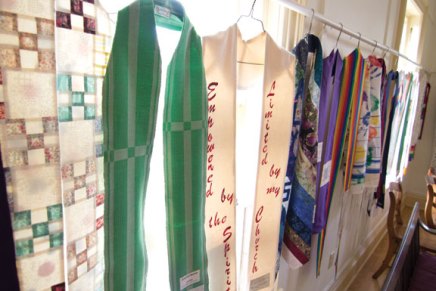 While the Rev. Dr. Ruth Snyder was a pastor at a Lutheran church, she fell in love with another woman.

But the church had a policy that did not allow gay and lesbian people in a relationship to be pastors. When the national assembly met in August 2005 to vote on whether to change the policy, the vote did not meet the two-thirds majority it needed.

The day after the vote, Snyder decided she no longer wanted to live a double life.

After serving the Upstate New York Synod of the Evangelical Lutheran Church in America for 23 years, Snyder met her bishop a week after the vote with a letter of resignation in hand.

Lesbian, gay, bisexual and transgender religious leaders throughout the country have faced fates similar to Snyder’s because of their sexual orientations or gender identities and some churches’ policies. In 1996, Martha Juillerat founded the Showers of Stole Project, which serves to end religious discrimination against LGBT people.