“These odd couples hold our lives in dynamic tension as we grow into the creatures God made us to be,” Hunter said.

His title was “Odd Couples: Believers and Unbelievers” and his text was John 17:13-20.

“Unbelievers are people who don’t believe like you do,” he said. The congregation laughed. “Becky, my wife, sat next to a rabbi on Sunday who said we need to be more radical about our own faith. By radical he meant rooted so that we become more the kind of person we are.”

Rabbi Arthur Waskow is a radical, a pioneer; he has been one for a long time and has no intention of giving up anytime soon.

On Friday, Waskow sat down for an intimate conversation with the Rev. Joan Brown Campbell in the Hall of Philosophy for the final lecture on the Week Eight theme, “Radicalism: Burden or Blessing?”

In a discussion titled “Radicals, Radishes and the Spiritual Root of Social Action,” the two touched on the fight of the radical, Waskow’s work with the Jewish renewal movement, the inspiration behind his interfaith action and the new radical movement both Waskow and Campbell belong to: the U.S. Council of Elders.

What was meant to be an interview with a Taliban commander became a seven-month kidnapping.

To keep up with the competition in journalism, David Rohde wanted to interview a Taliban commander for a book. His opportunity came Nov. 10, 2008.

But when he, Afghan journalist Tahir Ludin and their driver Asadullah “Asad” Mangal arrived at the Logar province for the meeting, the Taliban commander told them he changed the location farther down the road.

A black car was blocking the road ahead. Then two gunmen with Kalashnikov rifles ran toward their car from both sides. Ludin and Mangal moved to the back seat with Rohde, and the gunmen got in the car and continued driving.

“My head was spinning,” Rohde said during Friday’s morning lecture. “I hoped that this was all some kind of mistake — that they had maybe seen me in the back seat and saw a Westerner.”

Philip Clayton, provost of Claremont Lincoln University and dean of Claremont School of Theology came to the Chautauqua Institution to convert Chautauquans into radicals.

“I’m going to encourage you to be radical, to find your own radical voice. Everything I say has the goal of helping you to find the form of radical optimism that you have to offer,” Clayton said Thursday in the Hall of Philosophy.

During Week Eight’s fourth Interfaith Lecture on the theme “Radicalism: Burden or Blessing?,” Clayton discussed the two main facets of modern day religious radicalism in a lecture titled “Suicide Bombers and Barefoot Prophets: The Faces of Radical Religion in the Early 21st Century.”

She quoted Japanese poet and Buddhist priest Kobayashi Issa, “The man pulling radishes pointed my way with a radish.”

She continued, “The bittersweet essence of Jesus ministry is in that haiku. ‘Radish’ and ‘radical’ come from the Latin radix, meaning ‘root.’ Jesus was like a man pulling a root vegetable. He was pulling the root of his faith and using a vegetable to point the way to the Kingdom of God.”

Characters that perform extreme actions fascinate novelists, much like they do the secret service.

The secret service within a democracy becomes involved in situations when radicals attempt to cause change by violence that threatens the security of the state. Novelists observe and analyze those actions and put them together in readable ways.

Stella Rimington, former director general of MI5, used her own experiences and books to explore radicalism as a security threat and in novel writing during Thursday’s morning lecture in the Amphitheater for Week Eight, themed “Radicalism.”

Rimington’s lecture focused on three radical extremists encountered in both reality and in novels: spies, radical protesters, and political and religious terrorists.

After decades of rabbinical leadership and honors, Arthur Waskow is still a down-to-earth Jew.

Waskow is one of the most prominent leaders of the Jewish Renewal movement, which seeks to reinvigorate lofty, institutional Judaism with practices grounded in spirituality. In 1983, he founded The Shalom Center, an interfaith organization that unifies political and social action with spiritual search, and has served as director since.

He will join the Rev. Joan Brown Campbell, director of the Department of Religion, for a conversation about radicalism at 2 p.m. Friday in the Hall of Philosophy.

“I saw religion at its best and worst,” Rohde said about the ordeal in Afghanistan, which is chronicled in the book A Rope and a Prayer: A Kidnapping from Two Sides, by Rohde and his wife, Kristen Mulvihill.

Two-time Pulitzer Award-winning investigative journalist and author David Rohde will share his story and thoughts in his program titled “Beyond War: The Failed American Effort to Back Moderate Muslims Since 9/11” at 10:45 a.m. Friday in the Amphitheater. 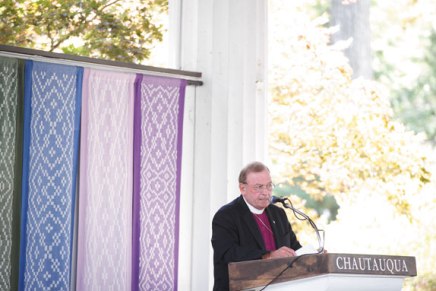 “Was Jesus a radical?” Bishop John Bryson Chane asked the Hall of Philosophy audience during the 2 p.m. Interfaith Lecture.

On Wednesday, Chane continued Week Eight’s theme of “Radicalism: Burden or Blessing?” with a lecture titled “Radicalism… A Passion for The Possible in the 21st Century.” The title comes from the title of a book written by William Sloane Coffin, a Christian theologian, Chane said. In his lecture, Chane discussed the meaning of the word “radical,” whether Jesus was a radical, and whether the Christian church of today is or is not a radical church.

Chane was consecrated the eighth Bishop of Washington and was CEO of the Protestant Episcopal Cathedral Foundation. He is also an active participant and proponent of interfaith dialogue and a graduate of Yale Divinity School. Before attending Yale, Chane was a student at Boston University where he was a member of the Students for a Democratic Society. 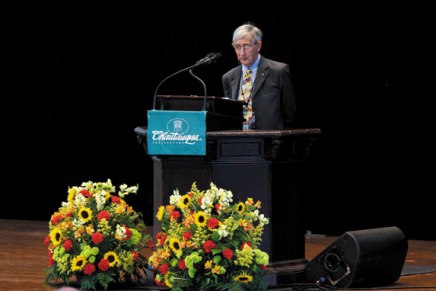 Radicalism in science is essential to move forward. In the span of two years, four scientific revolutions proved that to be true.

Those four revolutions were in space, nuclear energy, genomics and computing.

“Scientific discoveries come from people thinking thoughts that have never been thought before or people using experimental tools that have not been used before,” said theoretical physicist Freeman Dyson at Wednesday’s morning lecture in the Amphitheater.

Dyson, professor emeritus at the Institute of Advanced Study, shared his experience living through the four radical revolutions that occurred from 1944 to 1945 as the third speaker of Week Eight, themed “Radicalism.”