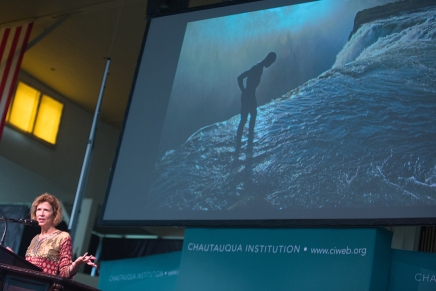 On her last visit to Chautauqua, Annie Griffiths, the first woman photographer for National Geographic, made a life-changing decision. That summer, she recounted in her morning lecture at 10:45 a.m. Tuesday in the Amphitheater, she decided to found Ripple Effect Images, a non-profit organization that sends top photographers and videographers to document the work of aid programs that help impoverished women and girls. Their images and videos help these organizations fundraise and spread awareness. 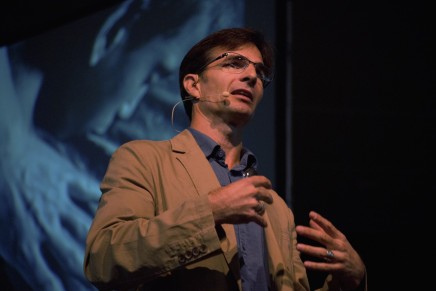 Standing under a photograph that he took of a shirtless, 15-year-old street kid high on industrial glue, National Geographic photographer Tyrone Turner recalled the destitution that he encountered while photographing the lives of “glue kids” in northeastern Brazil in the late 1990s.

Photojournalist Brian Skerry’s story on harp seals was one of his first cover stories focused on environmental issues for National Geographic magazine, published in 2004. During Thursday’s morning lecture in the Amphitheater, he took the audience through his personal journey as a photographer.

Skerry shared two photos from when he worked on the harp seal story. One was of a hunter dragging a seal carcass to land. In another, a seal five or six days old had fallen through thin ice, and its mother was frantically pushing it up for air. Though the seal survived, many others do not.

The story inspired Skerry to work on more stories focused on environmental issues in the ocean, he said. He has explored many places around the world to photograph a variety of marine wildlife.