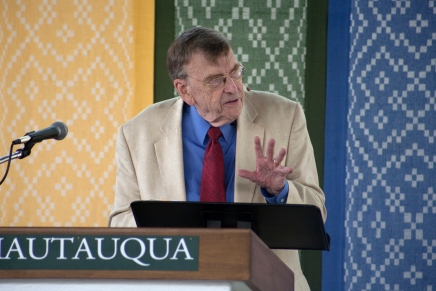 Spong said in his fifth Interfaith Lecture Friday in the Hall of Philosophy that the Christian religion is in need of a new Jesus story, and he believes John’s Gospel holds the key to redefining the tradition. 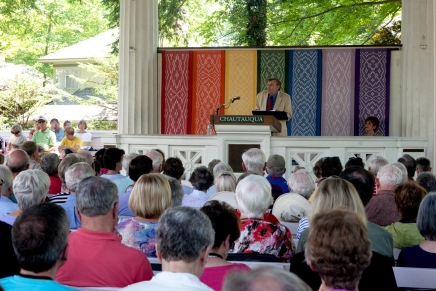 The mother of Jesus is very clearly a historical figure. Her likeness has become a symbol of religious devotion; her figure the subject of countless paintings and sculptures; her spirit the dedication of places of worship throughout the world. Despite her historical personage, John Shelby Spong argued in his fourth Interfaith Lecture at 2 p.m. Thursday in Hall of Philosophy that the figure of Mary in John’s Gospel is symbolic.

In the third of five Interfaith Lectures titled “The Fourth Gospel: Tales of a Jewish Mystic,” the retired Episcopal bishop spoke in the Hall of Philosophy Wednesday on the topic “Johannine characters: literary creations, not people of history.” Spong built off his previous lectures, which isolated John’s Gospel from the rest of the Gospels, then showed that the text was never meant to be read literally. Spong said the author leaves clues in the writing, telling the reader which characters are historical people — and which characters are merely symbolic.

John Shelby Spong said in his second of five interfaith lectures at 2 p.m. Tuesday in the Hall of Philosophy that Jewish people had an understanding of storytelling that was not meant to be read literally, but rather as an interpretive portrait. 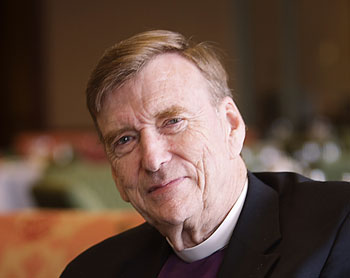 Christians have used the Bible’s Gospel of St. John as “the foundation of identifying creeds and doctrines and dogmas” — many of which don’t communicate well with modern educated men and women, according to retired Episcopal Bishop John Shelby Spong. It is this literal interpretation of the Gospel that Spong hopes to challenge in a series of lectures this week.

In the final lecture of his weeklong series, Spong challenged the notion of original sin and recast the meaning and role of Jesus Christ for Christians living in the 21st century.

In the 2 p.m. lecture in the Hall of Philosophy, Spong traced the ancient and biblical history that called for the development of a divine Christ-like figure, the life and way of Jesus Christ, and ultimately defined what he believes it means to be a Christian today. 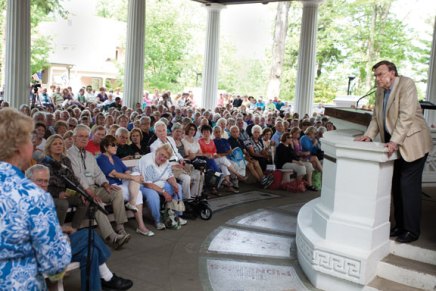 The story of Judas Iscariot is full of intrigue, betrayal and condemnation. Of the players in the New Testament, Judas, the fallen apostle, is recognizable to most Christians, but retired Bishop John Shelby Spong said he believes Judas, the man, never existed.

In Thursday’s Interfaith Lecture, Spong examined the case of Judas Iscariot through a historical and biblical lens. In his fourth lecture of the week based on the title of his recent book Re-Claiming the Bible for a Non-Religious World, Spong said Judas Iscariot was never a man, but a literary figure created decades after the crucifixion to represent non-Christ-following Jews.

To contextualize his argument, Spong opened his lecture with the story of the Jewish war with the Roman Empire. The war between the Romans and the Jews exploded in the year 66. Before the full-blown military engagement, Jewish Zealots, or “freedom fighters,” had staged frequent guerilla attacks against the Romans for decades, Spong said. In 70 C.E., the Romans embarked on a fierce offensive and seized the city of Jerusalem.

He and his second wife of 23 years, Christine, have five children and six grandchildren. The couple lives in New Jersey, and Spong spends his time lecturing, writing, traveling and — most importantly, he said — being with people he cares about.

“It’s been a wonderful life,” he said. “I’ve had just an incredible experience.”