There are several enigmas associated with Sir Edward Elgar’s “Enigma” Variations. Who is the cryptic dedicatee of Variation XIII, identified only by the cypher “***” in the score? Is the enigma a mysterious tune (“Happy Birthday”?) coded into the music? And is there an enigma at all, or was the work’s title Elgar’s hunting call to set future music lovers off on a wild goose chase, a cosmic joke swaddled in Victorian drollery?

To those mysteries, English-born conductor Andrew Constantine added another when he suggested in his podium remarks that at this performance, the coins customarily used in place of the timpanist’s usual sticks in Variation XIII “might be the very coins” Elgar employed more than a century ago.

Thursday at the London Olympics, the world’s fastest man and the world’s greatest half-miler turned in epic performances to make history on the track. The world’s greatest athlete was crowned in the decathlon, and a never-say-die women’s soccer team capped an inspiring journey to the gold medal. It was a day to take one’s breath away.

Guest conductor Mei-Ann Chen seemed to catch some of that spirit Thursday evening on the Amphitheater stage, which opened three years before the first modern Olympiad. She was clearly thrilled to be there, smiling broadly and bouncing around like a gymnast in the floor exercise finals.

And if the Olympic motto of “Faster, Higher, Stronger” wasn’t exactly the theme of the night, it certainly informed the athletic account of the Gershwin Concerto in F Major that opened the program.

On a night when the Amphitheater floor felt like a burn barrel and the air was thick enough to chew, the notion of a waterborne outing had obvious appeal. So was a hydraulically themed program that began with Ravel’s “Une barque sur l’océan” and ended with Debussy’s “La Mer.”

And with his crisp, white dinner jacket and black pants, conductor Michael Stern lacked only the epaulets and yachting cap of jovial Captain Merrill Stubing of “The Love Boat.” He was a charming host, too, expressing his delight at returning to the Amp after an absence of 26 years. Can it have been that long? Stern, born in 1959, easily looks 15 years younger.

In that interval, he has guest-conducted widely, founded a contemporary music ensemble in Tennessee and held music directorships in Europe and United States. For the past seven years, he has led the Kansas City Symphony but also spent four years as permanent guest conductor of the Orchestre National de Lyon in France, which gives his Debussy and Ravel a certain authority.

Wearing all black with an open-necked shirt, Timothy Myers was baby-faced and smiling. He looked like he was on his way to an audition for a Broadway musical, and in his hands the Act III Prelude from Wagner’s opera Lohengrin was a creature of the stage, swift, purposeful and proclamatory.

Korngold’s “Violin Concerto” is theatrical as all get-out, but it is a creature of the screen, not the stage. It’s thick with melodies from several of the 1930s scores that have made Korngold the avatar of big, symphonic movie music.

It’s a showpiece, a big-budget, a Technicolor Hollywood extravaganza, and most violinists play it that way. But in the hands of Clara-Jumi Kang, winner of the 2010 Indianapolis International Violin Competition, Korngold’s score was indie film, interior and ruminative.

Gerard Schwarz led New York’s Mostly Mozart Festival for 18 years, so it’s only natural that the composer would turn up for the season-ending program of the Chautauqua Symphony Orchestra in the form of the Piano Concerto No. 19, K.459.

Concert programs in the so-called Golden Age of American Orchestras (defined roughly as the time during which one began listening to orchestral music seriously) often opened with an overture, presented a concerto before intermission and a symphony after.

If Tuesday evening’s Chautauqua Symphony concert didn’t always conjure the Golden Age, the programming strategy largely did so. On the podium was the Bulgarian-born Rossen Milanov making his CSO debut. Milanov’s training has a Golden Age flavor, too. The artistic director of The Philadelphia Orchestra at The Mann Center for the Performing Arts is an experienced opera conductor, the opera pit being the traditional training ground for old-school maestros.

JoAnn Falletta is a tiny woman who nonetheless makes big explicit gestures on the podium. Her stick technique was so clear and precise, her left hand so expressive, her subtle, hip-swaying movements so balletic, that anyone in the 20th row of the Amphitheater Thursday would have known what she was after. 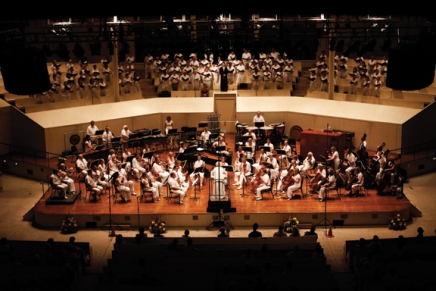 After electrical power was restored to a darkened Chautauqua Institution, conductor Doreen Rao restored a different sort of power — the power of an idea — to the Amphitheater stage with a program that may have been the most demanding of the Chautauqua Symphony Orchestra season. Ranging from the high Baroque of Bach’s 18th Century “Magnificat” to Leonard Bernstein’s 1971 “Mass,” an omnium gatherum of styles, Saturday’s program covered wide historical and stylistic ground.

I should have known that something was amiss at Chautauqua when I found a parking space at the bottom of the lot close to the exit. Paradoxically, the failure of a transformer earlier in the day and the resultant loss of electrical power increased the noise level on the grounds as gasoline-powered generators chugged away. 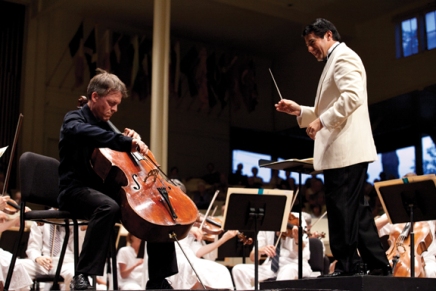 The buzz around the young conductor Miguel Harth-Bedoya is that he’s in the running to succeed the departed Stefan Sanderling as the Chautauqua Symphony Orchestra’s music director.