Online employment sites often suggest that last impressions make the best impressions, at least for job seekers who are last in a series of interviews for an open position. If that is true, the Israeli-American conductor Daniel Boico has an inside track among the field of eight vying to grab the Chautauqua Symphony Orchestra’s vacant music director position.

What is music about? It’s an ancient and rather silly question, but it comes up every time the music of Dmitri Shostakovich is played — as it was at Saturday’s concert by the Chautauqua Symphony Orchestra. 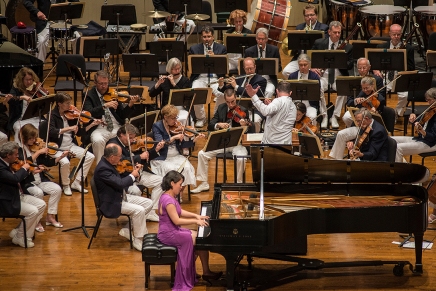 Discipline and precision were very much in evidence in the Chautauqua Symphony Orchestra program of this past Thursday, conducted by Bulgarian-born Rossen Milanov, music director of the Princeton Symphony Orchestra and the training orchestra Symphony in C — both in New Jersey — and principal conductor of Orquesta Sinfónica del Principado de Asturias in Spain.

For Saturday’s guest conductor Steven Osgood, the devil’s in the details.

Bestor Plaza had a melancholy air on the evening of the final concert of the Chautauqua Symphony Orchestra’s 2013 Season. Just a few children were playing, and quietly. There were good-byes to compose and memories to secure before the leave taking could start. 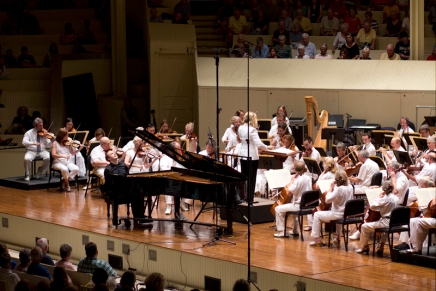 Sitting in the second row of the near-capacity house was a young woman wearing a blue T-shirt with the sign of the horns (the gesture the cartoon characters Beavis and Butt-head were known for) and the legend “You Rachmaninoff.”

It was the kind of night seldom encountered by the cool waters of Chautauqua Lake: suffocatingly hot and humid. So it was easy to forgive the not-insignificant portion of the Amphitheater audience that fled, presumably for the comfort of air-conditioned homes, after Augustin Hadelich’s Apollonian performance of Édouard Lalo’s “Symphonie espagnole.” They didn’t know that they would be missing a performance of Ottorino Respighi’s “Pines of Rome” that was almost as torrid as the weather.

“Wagner vs. Verdi” screamed the headline of the weekend issue of The Chautauquan Daily. If you’re reminded of a heavyweight title bout, well, as far as 19th-century opera is concerned, that’s a pretty accurate way to look at things. 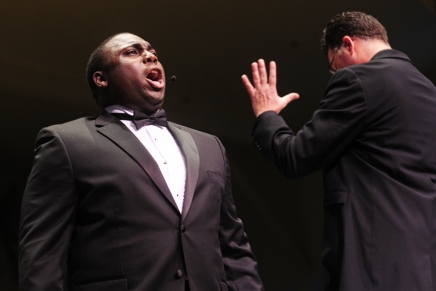 The notion of linking Chautauqua Symphony Orchestra performances to the week’s theme is as lovely as it is impractical. Thursday evening in the Amphitheater, guest conductor Steven Osgood obliquely acknowledged as much in his podium remarks. 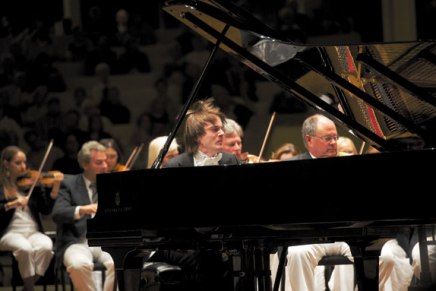 It was a night for beginnings and endings in the Amphitheater on Tuesday. This being the final Chautauqua Symphony Orchestra concert of the season, Institution President Tom Becker was on hand to offer his thanks to the players and also the players’ gratitude to the audience. He drolly introduced himself as “Marty Merkley’s yes man,” which got a nice laugh.

Merkley had a good night, mounting a valedictory program that included two Chautauqua debuts: of the young Israeli conductor Noam Zur (making his North American debut); and of Daniil Trifonov, a pianist whose appearance was a consequence of winning the Arthur Rubinstein International Piano Master Competition.