Last year’s Chautauqua Symphony Orchestra concert with Peter Serkin was made possible by the support of William Freyd and his wife, Diane Jones Carlson. When the CSO takes the Amphitheater stage tonight at 8:15 p.m., joined by guest conductor Christopher Seaman and solo violinist Karen Gomyo, it will again be with the support of Freyd and Carlson.

Freyd and Carlson both draw on a strong past of philanthropy, and Freyd on a past of rich musical involvement — two of the three primary motivations behind their sponsoring of CSO concerts.

Christopher Seaman sat on the front porch of Hagen-Wensley House, sipping a mug of tea.

It was 4 p.m. on a Wednesday afternoon as the British conductor reviewed a well-worn orchestral score — Beethoven’s Piano Concerto No. 5, the “Emperor” — and enjoyed the mild June weather.

Multiple flight delays the day before had left him feeling jet lagged, but Seaman weathered the stress with good humor as he talked about some upcoming pieces in the Chautauqua Symphony Orchestra season. 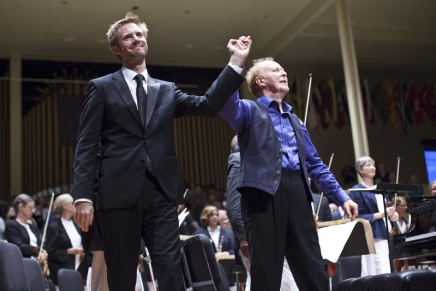 The opening concert of the Chautauqua Symphony Orchestra is a sign that the Chautauqua Institution’s summer is officially in full swing. And a sign — coincidental or intended? — that it was nigh rang over the grounds earlier Saturday. A few hours before the concert commenced with Edward Elgar’s Pomp and Circumstance No. 4, Miller Bell Tower chimed with the British composer’s more famous No. 1, which graces many a commencement ceremony.

Regardless of the reason Elgar was ringing from on high, it was welcome to this critic for both mood and intellect (especially since the main themes of both approximate inversions of each other).

In the Amphitheater, Chautauqua Institution President Tom Becker announced the CSO’s 85th season, calling it the “bedrock” of the arts here. Guest conductor Christopher Seaman then led the audience in “The Star-Spangled Banner.” But the real deal came with the violins capturing that refulgent Edwardian tone in the Elgar. (That timbre would be replicated, if fleetingly, near the end of Brahms’ Symphony No. 2 at the close of the program.) Seaman set a relaxed tempo and let the music flow. I have always enjoyed the beaming face of the timpanist of the CSO, and he was again leading from the back with a smile as well as a solid and lively beat.

The music played Saturday evening in the Amphitheater will sound the spirit of Chautauqua: noble, steeped in tradition with a touch of the pastoral.

This marks the Chautauqua Symphony Orchestra’s first concert of the 2013 Season. At 8:15 p.m., Christopher Seaman, back for a third year as a CSO guest conductor, will be joined by pianist Andrew von Oeyen. Von Oeyen will perform Beethoven’s Piano Concerto No. 5, commonly known as the “Emperor” concerto.

Saturday evening proved quite sensational in the Amphitheater, where guest conductor Christopher Seaman and pianist Alexander Gavrylyuk offered outstanding work in the second of two concerts centered around the piano concerti of Sergei Rachmaninoff. Weather and Delta Airlines conspired to make me miss the first of these on Thursday; but Saturday’s program, sumptuously played by the Chautauqua Symphony Orchestra, was genuinely memorable. Fortunately, the concert was broadcast live via NPR affiliates in Buffalo and Pittsburgh.

Christopher Seaman does not like the word “hackneyed” and does not recognize the term “potboiler.” Great music is simply great, played once or a thousand times, and “Ride of the Valkyries” is one of those pieces of music.

Saturday night’s Chautauqua Symphony Orchestra concert at 8:15 p.m. in the Amphitheater will boom to life with the famous, robust brass line of Wagner’s “Ride of the Valkyries” from Die Walküre, and does not let up from there. The CSO then launches into Dvořák’s Symphony No. 8 and concludes with the popular and stirring Rachmaninoff Piano Concerto No. 2, once again featuring Chautauqua favorite Alexander Gavrylyuk as guest piano soloist.

Alexander Gavrylyuk has been coming to Chautauqua every summer for the past six years. His first performance in Chautauqua followed his winning the First Prize, Gold Medal, and Best Performance of a Classical Concerto at the Arthur Rubinstein International Piano Masters Competition in 2005.

Christopher Seaman first conducted the Chautauqua Symphony Orchestra last summer, and one of his concerts happened during the 16-hour power outage.

Tonight’s concert will spotlight Gavrylyuk playing Rachmaninoff’s Piano Concerto No. 1, Op. 1 in F-sharp Minor, followed by Mendelssohn’s Symphony No. 5. The program will open with Sibelius’ “Finlandia.”

Christopher Seaman was music director of the Rochester Philharmonic Orchestra for 13 years but has never been to Chautauqua — until tonight.

Seaman will conduct the Chautauqua Symphony Orchestra at 8:15 p.m. tonight in the Amphitheater.