On a quiet Chautauqua evening, nearing dusk, there are 24 notes in the air — 24 notes that tap deep…

Anyone who’s ever wanted to play John Cage’s “Quartet” using only cowbells but lacks the necessary instrumental skill is in luck: There’s an app for that.

Third Coast Percussion helped develop two free apps for the iPhone and iPad that let audiences delve into the limitless world of percussion. The first is called “Third Coast Percussion: John Cage Quartet,” which offers 14 percussion instruments that can be played along with John Cage’s seminal work for four percussionists. There’s also the option to record custom sounds. 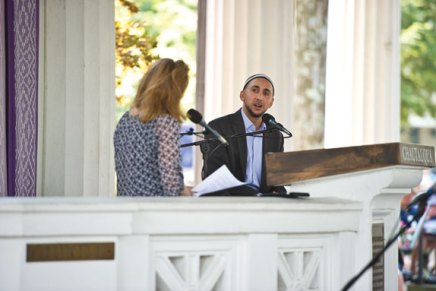 At Thursday’s Interfaith Lecture, Nashashibi sat down with radio host and producer Krista Tippett for the fourth installment of this week’s lecture series based on the Week Three interfaith theme, “Krista Tippett and Friends who Inspire, Commit, Act.” In their conversation, Tippett and Nashashibi discussed his personal faith journey to Islam and the work he does for social justice through his nonprofit organization, IMAN.

Nashashibi’s relationship with Islam resembles that of a convert, he said. Though born in Jordan, Nashashibi grew up all around the world and spent much of his early life living in Europe. The home he grew up in was not ideologically secular but areligious. Little focus was placed on the study or practice of Islam.

When he reached college-age, Nashashibi came to the Southwest Side of Chicago on a soccer scholarship. When he arrived, he was confronted with the reality of American life in a city rife with economic disparity and racial violence.