It is 10:15 a.m., and Chautauqua’s morning bustle has begun. The Daily paper boy’s call is accompanied by the shuffle of feet and voices as Chautauquans begin to head for the Amphitheater lecture. It can all be heard from the United Church of Christ Randell Chapel. But the noise seems to fade as Roman Catholic Deacon Ed McCarthy and Jane, his wife, begin the daily Service of Blessing and Healing. 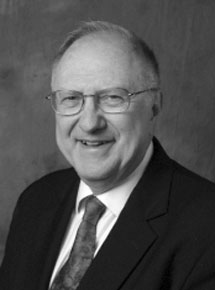 Frank E. Young will speak on the topic “Packing for the Journey to Eternity,” at 7 p.m. tonight at the Hall of Philosophy as part of the Chautauqua Christian Fellowship lecture series. The event is co-sponsored by the Chautauqua Department of Religion.

An ordained Presbyterian minister, Young is the author of Good Grief, Love’s Final Gift, after the death of his wife of 51 years.

In June, 1630, the Arbella landed in Salem, Mass., delivering, among many others, John Winthrop, a wealthy English lawyer, who would play a considerable role in the founding of the Massachusetts Bay Colony.

Eight months later landed the Lyon, delivering another principal in the history of the New England settlements, Roger Williams, son of a merchant tailor. In those two devoted, religious figures looms a history that still influences U.S. citizens.

Charles C. Haynes, senior scholar at the First Amendment Center and director of the Religious Freedom Education Project will speak about that history at 3:30 p.m. today in the Hall of Christ. The title of his talk is “John Winthrop and Roger Williams: Competing Visions of Church and State in America.”