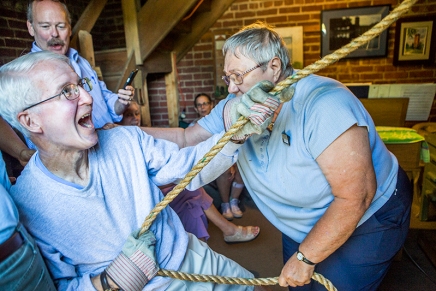 With the ringing of the bells, another year of reading has begun for the Chautauqua Literary and Scientific Circle. 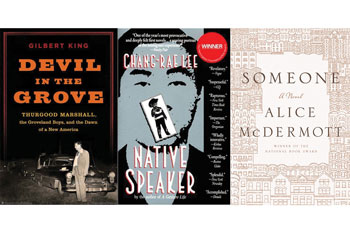 Dozens gather around in a circle, waiting for word from on high. It’s not the Sermon on the Mount — it’s Bryant Day. 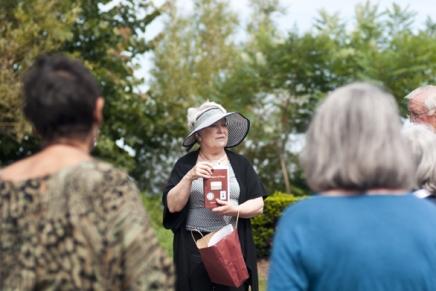 This last Saturday was Bryant Day, a tradition that marks the official start of the Chautauqua Literary and Scientific Circle reading season. The ceremony featured Sherra Babcock, vice president and Emily and Richard Smucker Chair for Education, announcing the first three selections of the year: Maya’s Notebook by Isabel Allende, What I Did by Christopher Wakling, and The Names of Things by John Colman Wood. The three novels fall within the season’s vertical theme, “Exploration and Discovery,” which honors Week Five’s morning lecture theme and the second interarts collaborative project on the American West.

“The bell-ringing will go on for a while,” said Sherra Babcock, Chautauqua Institution vice president and Emily and Richard Smucker Chair for Education. “And it will be loud.” 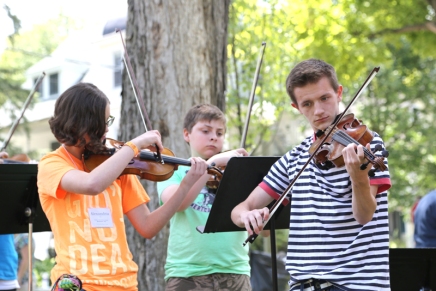 As Terry Bacon sat outside the School of Music’s studios studios Tuesday morning, a young musician approached him and shared his experience at the Chautauqua Music Camps. The student said that it was, for him, the first place he had ever felt welcome. It was the only place, other than his own band room, where he felt no one would make fun of him. It was where he belonged. 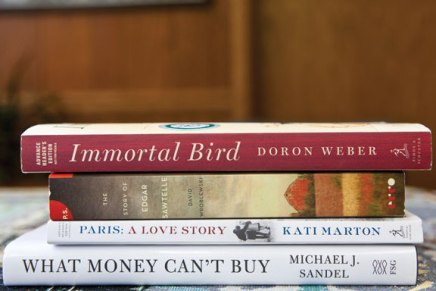 The Bryant Day celebration on Saturday began at Miller Bell Tower and ended with books.

Bryant Day, a Chautauqua tradition, marks the start of a new reading season with a ceremony led by the Alumni Association, and each member of the Chautauqua Literary and Scientific Circle Class of 2012 rings the bell.

Sherra Babcock, director of the Department of Education and Youth Services, announced a few CLSC selections after toting the books from her office in the Colonnade to Miller Park. Babcock kept the books hidden in her office until they were revealed to Bryant Day attendees.

The CLSC joins Chautauqua’s other arts programs in celebrating Romeo and Juliet in 2013, but Babcock emphasized it is in a broad sense, and all selections have themes similar to Shakespearean work. 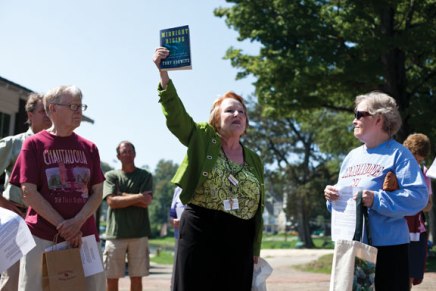 This weekend, Chautauqua Literary and Scientific Circle graduates will ring the Bryant Bell to commence the new reading year in celebration of Bryant Day.

A ceremony with the Alumni Association begins at 11:30 a.m. Saturday by Miller Bell Tower, and Sherra Babcock, director of the Department of Education, will announce a few CLSC selections for 2013. Taking inspiration from next season’s focus on Romeo and Juliet in Chautauqua’s fine and performing arts, 2013 CLSC books will celebrate the themes, broadly construed, from Shakespearean classics. 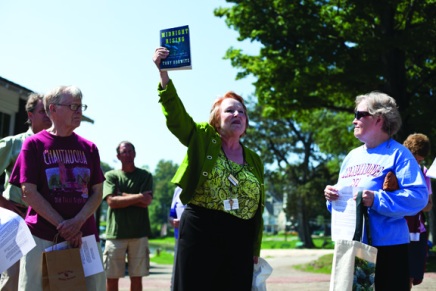 On Bryant Day, members of the Chautauqua Literary and Scientific Circle gathered to ring the bells of Miller Bell Tower.

Bryant Day was the last hurrah of the Class of 2011 and the first of the 2012 reading season, whose vertical theme is “Character.”

At the service, Sherra Babcock, director of the Department of Education, announced four of the upcoming CLSC book selections, the most that has been chosen this early in years. 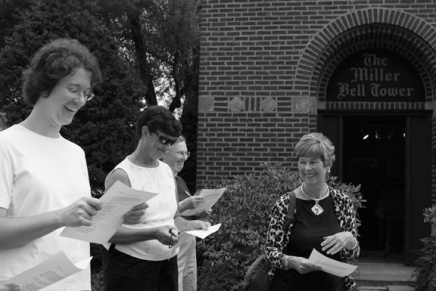 On Saturday morning, the Chautauqua Literary and Scientific Circle Class of 2011 will climb the steps of the Miller Bell Tower, take hold and pull the ropes for the Bryant Bell.

The 1,000-pound chime will ring in the new CLSC reading season — and say farewell to the old.