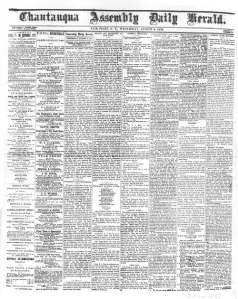 The Chautauquan Daily is the official newspaper of Chautauqua Institution.

During Chautauqua’s nine-week summer season, the Daily is a community newspaper distributed six days a week by carriers to subscribers at their homes within and immediately outside the Institution. It is also sold by hawkers on Bestor Plaza each summer morning as well as mailed to subscribers. The newspaper is written, designed and edited at Chautauqua and sent to an off-site printer who returns the finished publication to the Institution for delivery.

The newspaper began as the Chautauqua Assembly Daily Herald in 1876, two years after the founding of the Chautauqua Institution. Since then, it has continuously served Chautauquans with information about current events and as the archival record. The newsroom has been a newswriting and reporting training camp for well-known journalists such as investigative reporter Ida Tarbell and current Time magazine managing editor Nancy Gibbs.

The Daily covers as many events as possible during the nine-week summer season. Reporters and photographers fill its pages with news, feature stories and daily up-to-date previews of the day’s activities. The seasonal staff are generally college students who apply to be a part of the Chautauqua experience as reporters, photographers, copy editors and page designers. Their mission is to help all Chautauquans, first-timers and those with multi-generation backgrounds, know about as many speakers, programs, entertainment and special events as possible. The staff each year is a mix of newcomers and veterans.

In a 2005 piece for The Baltimore Sun, C. Fraser Smith wrote, “In a media world virtually atomized by electronic devices, a world taken over by commentators and gossips of every stripe, the Daily gives you well-grounded, comprehensive coverage of ideas you care about at considerable length.”