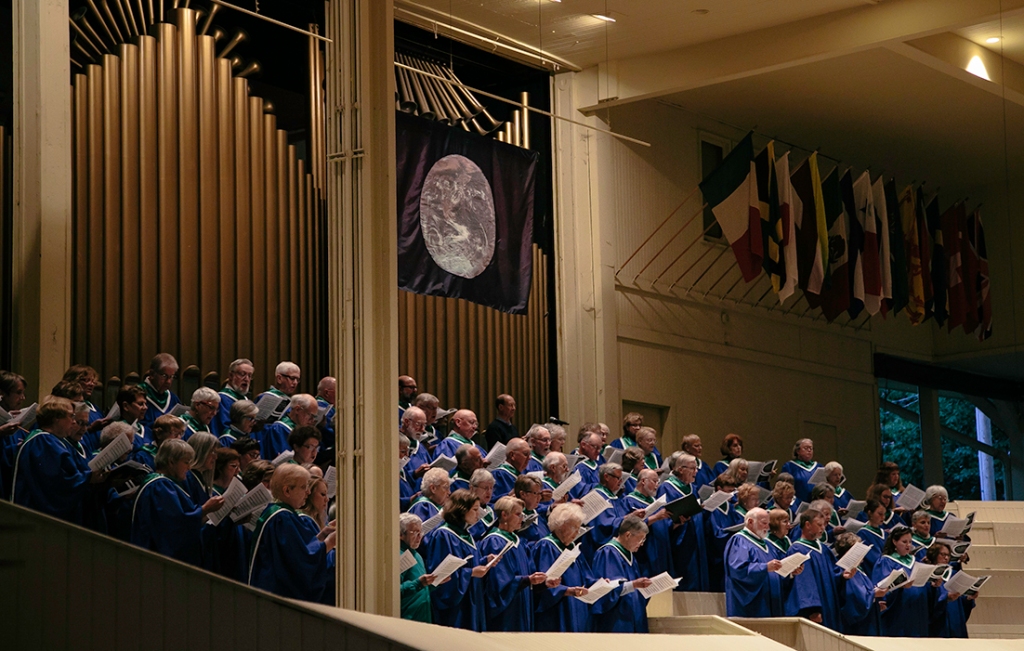 Just as there has been every week, a Sacred Song Service will be held at 8 p.m. Sunday in the Amphitheater.

This week’s service, however, will not be business as usual; instead, Jared Jacobsen has worked to create a program that will provide a “jewelry setting” for Chautauqua Institution President Thomas M. Becker’s Three Taps of the gavel address.

“We’ll lay this groundwork of reminiscence, laughing and sniffling, and I think that’s important here,” Jacobsen said. “Because it’s not business as usual. It’s not like when you turn in your hotel room key after two weeks in the Bahamas. Chautauqua’s not remotely like that. Chautauqua is closing a door that you hope you will open again, and that’s a huge deal with a lot of baggage.”

Jacobsen has titled the service “ ‘And Unto Ages and Ages’: Final Chautauqua Thoughts,” which is taken from “Pilgrim’s Hymn” by Stephen Paulus. However, Jacobsen said the idea he returned to as he planned the program was pulled from a doodle in the Colonnade’s Finance Office captioned “Chautauqua is a verb.”

The caption reminded Jacobsen of the many Chautauquans he’s known over the years who feel that their ability to return to the grounds is a metric of their own well-being.

“I’ve not been able to get that out of my mind,” he said. “That’s the magic of this place, the stranglehold it has on all of our psyches.”

Also on the program for the evening are “Omnia Sol,” by Z. Randall Stroope, which is adapted from the same texts that Carl Orff used for Carmina Burana. “How Can I Keep from Singing” by Bradley Nelson will also be performed. That piece was composed for him and a large choir to celebrate the centennial of the Spreckels Outdoor Organ in San Diego in March, Jacobsen said.

This Sacred Song Service will differ from those that took place earlier in the season in one final way: While Jacobsen traditionally ends Sacred Song Services with a rendition of Handel’s “Largo,” this week he will perform it before the service is complete.

“It’s important to me that the rhythm of my life that Chautauqua ends with the taps of the gavel, and if we end up singing something after that, I’m not going to accompany it,” Jacobsen said. “My job is done, and it has to be done in my head and in my heart [with the three taps], because otherwise I’ll fall apart.”

Though these final moments of the season are emotional ones for Jacobsen, he sees them as an essential transition for Chautauquans.

“It’s a very profound moment, but it’s a necessary one,” he said. “It’s our job to help people make the landing gently and go on to where they’re going next.”