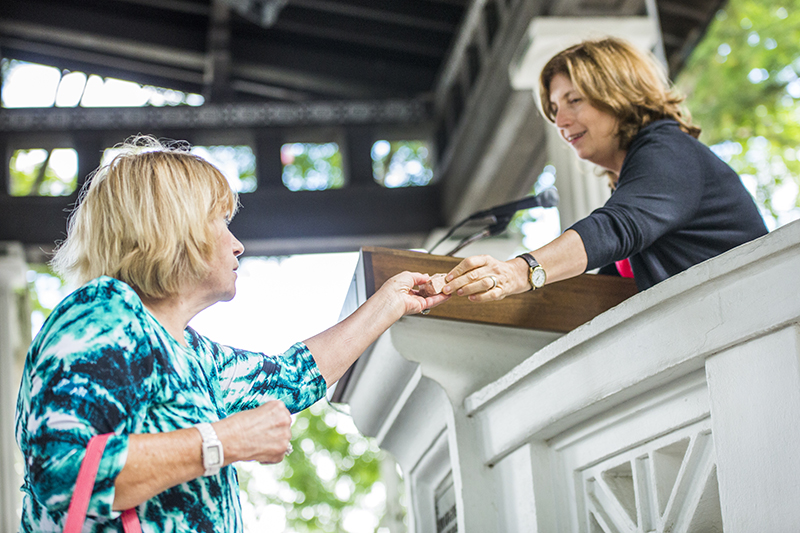 Anat Hoffman, chair of Women of the Wall, hands a rock brought from Israel to audience members to pass around during the Thursday afternoon lecture in the Hall of Philosophy. (Ruby Wallau | Staff Photographer)

Israel may be a relatively new country, but the problems that prevent it from being a place of peace are ancient.

During her Thursday lecture in the Hall of Philosophy, Hoffman detailed “The Search for Cracks in the City of Stone: An Anatomy of the Struggles for Pluralism in Modern Jerusalem,” which outlined Israel’s nuances in relation to the contemporary geopolitical atmosphere.

“My town is a place where every occasional brushfire can be the beginning of a new religion,” Hoffman said.

During her college years at the University of California, Los Angeles, Hoffman was exposed to the United States’ Constitution and the concept of religious plurality. The absence of a constitution in Israel is what drives many of Jerusalem’s problems, she said.

“You don’t know what a divine document you have,” she said. “You take it for granted, but it is wonderful.”

The protection that the Constitution offers to U.S. citizens for religious freedom was new to Hoffman as well, for Israel does not extend the same liberties. The country only recognizes one form of Judaism, orthodoxy, which Hoffman called a tragedy for orthodoxy, Judaism and for Israel.

To combat conservative religious doctrine in Israel, Hoffman helped found the Women of the Wall. The group is an international organization that strives to extend women’s rights to pray at the Western Wall, or Kotel, where ancient religious laws prohibit women from worshiping.

Women of the Wall is composed of activists from reform, orthodox and conservative Jewish sects.

“Hope is something funny,” she said. “It is strong but thin.”

Still, Hoffman stressed, it is important to be patient with Israel.

Hoffman cited Israel’s role in the rebirth of the Hebrew language, thousands of technical innovations, and the creation of gay-friendly Middle Eastern cities as reasons for audiences to look beyond the conflict to see Israel for the triumph that it is.

“But we have our blind spots,” she cautioned. “Israel will be measured by how it deals with minorities, and we have failed.”

God warns 36 times that doing right by minorities is incredibly important, and it’s time that the government of Israel listens, Hoffman said.

Studying American history made her sensitive to the violence against minorities, Hoffman said.

“Israel is not racist,” she said. “But there are a few malignancies, and we must fight against them. Because even the smallest tumor can kill a human.”

To conclude, Hoffman invited everyone to visit Israel and see beyond the headlines depicting conflict.

“We want to have an open, kick-ass competition in the world of religion,” she said. “May the best rabbi win.”