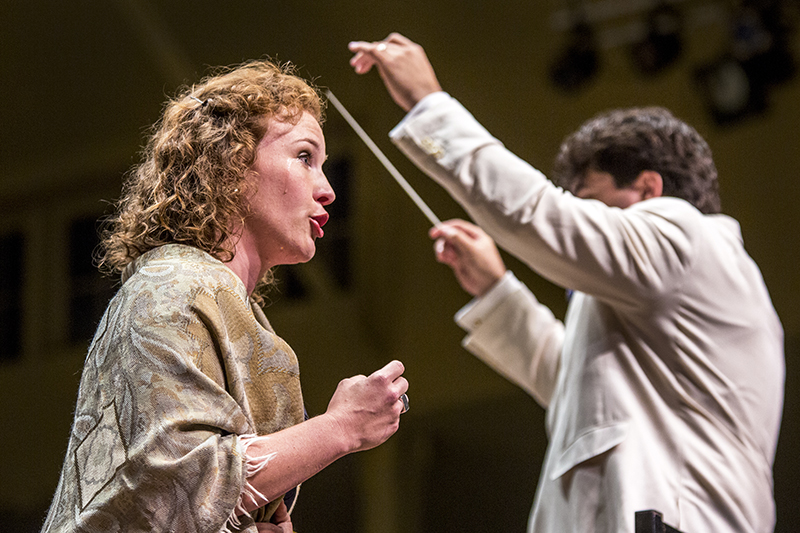 I hope this doesn’t put us into overtime,” said Marty Merkley, Chautauqua Institution’s vice president and director of programming, as he stood at the microphone in the Amphitheater Tuesday night. He had just been hailed for 25 years of service, which will conclude with his retirement at the end of September.

It was a good thing warmth pervaded the ceremony preceding the Chautauqua Symphony Orchestra’s final concert of 2015. The weather was what might charitably be called cool, prompting more than a few audience members to flee during intermission. Chautauqua President Tom Becker acknowledged the temperature at the outset when he made a reference to Christmas. Before heaping Merkley with praise, Becker saluted the orchestra’s “exquisite beauty and breathtaking programming.”

Certainly, the programming Tuesday was colorful, with lush and sweeping works by Respighi, Chausson and Sibelius to fill the Amp with vibrant sound. Cristian Macelaru, conductor-in-residence of the Philadelphia Orchestra and a musician whose career is on a steady ascent, returned to the CSO’s podium for his second appearance of the season. The night also held the Chautauqua debut of the superb American mezzo-soprano Sasha Cooke.

Macelaru and the orchestra could have ended the season by offering a menu stuffed with favorites. Of the pieces on this program, only Respighi’s “Fountains of Rome” could possibly fall into that category, though it is overshadowed by another score from the composer’s “Roman Trilogy,” the grandly sonorous “Pines of Rome.” Yet Respighi’s tribute to four of the city’s major fountains abounds in delectable soundscapes, many of them delicate and lyrical.

The piece wouldn’t be Respighi, of course, if it didn’t exploit the full resources of the symphony orchestra. The Chautauqua brass section was more than willing to set the most voluminous passages into glorious orbit. But Macelaru proved his sensitivity by the shaping the score with utmost attention to detail, savoring its “exquisite beauty” and bringing judicious pacing to the various tableaux.

“Exquisite beauty” also applied to the performance of Chausson’s Poème de l’amour et de la mer, Op. 19, that Cooke gave in close collaboration with Macelaru and the orchestra. Set to verses by Maurice Bouchor, the song cycle traces the motion of the sea and aspects of love in music of shimmering, mournful and voluptuous personality. The sea imagery is rapturous and multi-hued, and may have had some influence on Debussy, who wrote his great “La mer” a decade later.

Cooke inhabited the conflicted worlds of Chausson’s cycle from the moment she began pouring out her lustrous, vividly focused voice. Although the French texts weren’t projected or printed in the program, it was easy to discern the intent of the words from Cooke’s nuanced shading and facial expressions. Macelaru kept the orchestra in careful and cogent balance, allowing their guest to be heard even when Chausson turns up the sonic heat.

Plenty of urgency pervaded the account of Sibelius’ Symphony No. 1 that ended the concert (and the season). The Finnish composer’s second and fifth symphonies are performed more often than the first, but there’s no need to look down upon his initial essay in the genre. In its revised version, the one always performed, the work shows Sibelius in debt to Tchaikovsky and other Romantic masters while already developing a distinctive musical voice.

From the opening clarinet solo, luminously played by Eli Eban, to the work’s mystifying closing gesture, Tuesday’s performance was suffused with atmosphere and poetic intensity. Macelaru gave the lyrical passages ample space to sing and sent the majestic orations on elegant wing. The night’s uncomfortable temperature may not always have been kind to instruments, but when timpanist Stuart Chafetz opened ears in the Scherzo and the entire orchestra played the rhapsodic theme in the finale, nothing could distract from the music-making Chautauqua is so privileged to hear on a regular basis.

Donald Rosenberg is editor of EMAg, the Magazine of Early Music America, and author of The Cleveland Orchestra Story: Second to None.