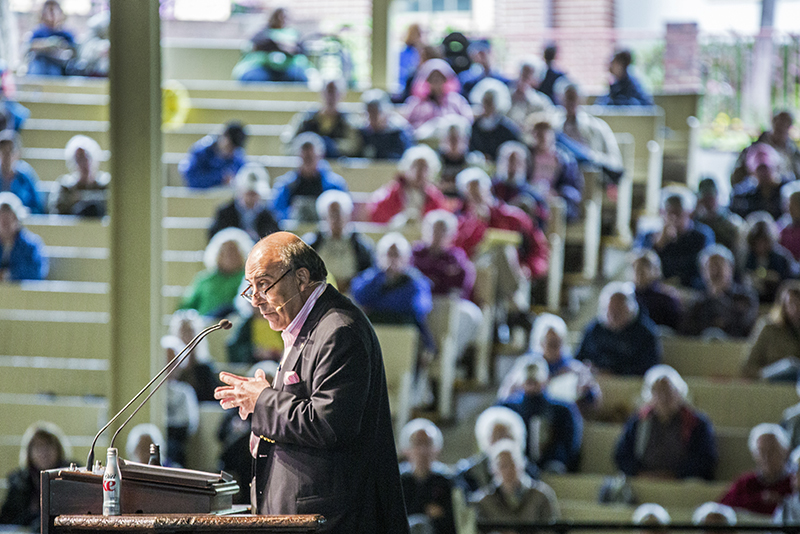 Muhtar Kent, chairman and chief executive officer of the Coca-Cola Company, speaks about the company’s work supporting communities around the world during his morning lecture Wednesday in the Amphitheater. (Saalik Khan | Staff Photographer)

As chairman and CEO of the Coca-Cola Company, a corporation that is often coupled with buzzword brands such as McDonald’s and Nike, Muhtar Kent is tasked with arguably one of toughest sales pitches in multinational commerce: that Coke actually cares about the communities in which it does business.

Kent plainly framed his Wednesday morning lecture with what he perceived as the ultimate goal of good business. He also underscored the requirement of a symbiotic relationship between business-building and community-building.

“Coca-Cola, for years, has taken to heart the fact that we cannot have a vibrant, dynamic, growing business unless there are growing, dynamic, vibrant communities which we serve,” Kent said. “Strong communities equal strong business.”

Kent, who first joined the Coca-Cola Company in 1978, has led the business since April 2009 and has witnessed the corporation spread to almost every country on Earth. He stressed that Coca-Cola is a global enterprise. Just as importantly, it is also a “multi-local business” that focuses on creating “economic value” at the local level, he said.

“Our company … proudly employs 770,000 employees around the world in those 207 nations,” he said. “The value chain of the Coca-Cola System creates jobs for 10 times more people — 7 million people around the world.”

Through this expansive network, representatives of Coca-Cola are able to reach 24 million retailers each week, Kent said. This includes vendors from the smallest bodega to the largest supermarket.

“Because of that trust and confidence placed in us by those customers, we’re striving with all we have to make our brand stronger, more relevant, more desired, and ultimately more loved,” Kent said. “A brand is a promise, and a good brand is always a promise kept.”

A large part of that promise means leaving the most positive impact possible on the world, for as many people as possible — whether directly connected to business or not, Kent said.

“Every day, my colleagues and I get up with a passion for making a lasting, positive difference in people’s lives,” Kent said. “And as we do, we’re always seeking to better integrate our sustainability efforts into our daily actions and the business that we do proudly every day.”

Kent dubbed this trust as the “secret formula” driving Coca-Cola’s brand advancement and its pursuit of practices to not only sustain the company’s longevity, but also nurture its multi-local business environment.

Regarding women, Kent emphasized the company’s devotion to promote their role and increase their economic opportunities within the corporate sphere and in local, entrepreneurial endeavors.

This commitment is illustrated through the company’s 5by20 campaign, which aims to equip 5 million women entrepreneurs with the economic tools and training to be successful business partners by 2020. Although the campaign had connected with only 865,000 women from 2010 through 2014, Kent is confident this goal is attainable. He is also confident these women will share the money they make with their communities.

Also on the company’s list of endeavors, Coca-Cola has pledged to replace 100 percent of the water used in all its products by 2020.

For a company that uses 500 billion liters of water every year, this goal might seem lofty. However, Kent said the externally audited program will reach its goal five years ahead of schedule through three initiatives: The first is rinsing bottles with air instead of water; the second is recycling used water directly into communities’ clean water systems; the third is replenishing communities’ supplies with rainwater harvesting programs.

In accomplishing these tasks, Coca-Cola will be a water-neutral company by the end of the year, Kent said.

“I’m a huge believer that big issues around the world — societal problems, infrastructure issues, socio-political economic issues — cannot be solved by business alone, and cannot be solved by government alone,” he said. “It cannot be solved by civil society, education and other NGOs alone. There has to be that golden triangle partnership between the three to ensure that we have a vibrant, dynamic, sustainable solution for some of those issues.”

Through its products and services, Coca-Cola is working toward increased well-being for its retailers and customers with a specific focus on combatting obesity.

“We’re continuing to do our part to inspire healthier, happier, more active lifestyle in the United States and all around the world,” Kent said.

The introduction of more than 100 low- and no-calorie products, implementation of smaller packaging, and support for more than 330 physical activity programs across 110 nations are all specific initiatives Kent listed in connection with this final pillar of sustainability.

Aside from these three objectives, Kent offered a few more examples of ways in which Coca-Cola’s business practices contribute to the growth and development of the company as well as individual communities.

The development of roads, bridges and other infrastructure improve a community by expediting business transportation and deliveries. The formation of micro-distribution centers also ease the shipping process while bringing numerous jobs and other forms of development to an area. Initiatives like EKOCENTERs — small kiosks offering basic goods and services like solar power, Internet connectivity and clean drinking water — provide basic necessities for communities to become modernized, Kent said.

“[This initiative], taken together, is a catalyst for community development and growth,” Kent said. “We love this social enterprise model because everyone benefits again. The community benefits from improved products and services, most importantly, clean water.”

In connection with the spread of Coca-Cola products to some of the most remote places on Earth, the company is working to provide medicine to communities in need.

Project Last Mile, which began in 2010 and works through the golden triangle model, is “committed to improving the distribution of life-saving and life-enhancing medicine to people in hard-to-reach parts of Africa,” Kent said. “We are sharing our distribution expertise with public health agencies that distribute the medicine.”

This project has increased the availability of medicine by 20 to 30 percent in areas lacking adequate medical services, Kent said.

These programs were not just motivated by moral or ethical ideals, he said. Rather, they serve a purpose that is directly related to business.

“It’s that kind of juxtaposition that you have to find to create these programs that are good for business, good for the planet, good for the world, so that we can say we have done a small part in transferring a better world to the next generation,” Kent said. “That’s the key.”