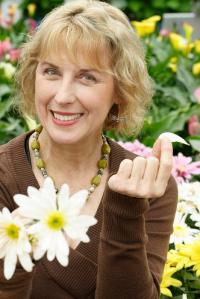 Essential to life on earth, but better out of sight and out of mind, insects have always had a complicated relationship with humans — they’re often viewed with a combination of awe, fear and disgust. Master gardener Sally Cunningham thinks it’s time society got over this.

Cunningham will discuss the benefits insects provide for home gardens at 12:15 p.m. today in Smith Wilkes Hall during the Bird, Tree & Garden Club’s final Brown Bag. She will present a chemical-free system of gardening with a focus on “companion plant” combinations — herbs, flowers and vegetables that attract beneficial insects and other garden helpers.

“There’s still a knee-jerk culture around insects, so I want to tell people what insects to encourage and foster,” she said. “I also want to tell gardeners who care about this issue how to speak to other people about it.”

Cunningham feels so passionate about this topic that she wrote a book about it titled Great Garden Companions: A Companion-Planting System for a Beautiful, Chemical-Free Vegetable Garden. In it, she also addresses the most important aspects of a successful, sustainable garden: biodiversity and “layering,” or creating a landscape with plants of different sizes, such as trees, shrubs and perennial plants.

She said biodiversity refers to many different concepts beyond having different types of plants, such as planting with a large percentage of native plants that attract native insects and birds. As for beneficial native insects, Cunningham cited lady beetles, spiders and praying mantises as the most obvious examples.

“Beyond that, there are a great number of ground beetles and true bugs that are almost always the predators of pests you don’t want,” she said. “The more you know about these beneficial insects, the less you’re willing to kill something you can’t name.”

Lastly, when constructing a chemical-free garden, Cunningham said patience and an appreciation for imperfection are additional important elements.

“Things don’t happen overnight,” she said. “If you had a chemical-loaded system, you have to build up your soil and diversity when switching to chemical-free.”

She said many people are reluctant to adopt organic, chemical-free and environmentally friendly gardening techniques out of a distaste for gardens that look wild or “messy.”

“The idea of a naturalized, diverse yard can sound like the opposite of the image of the tidy American landscape that so many landscapers have created,” she said. “What I’m saying is there’s a middle ground, where you can have lots of flowers up front and put them together in a good-looking way.”

In today’s world, she believes people are often turned off by the idea of imperfection in both flowers and vegetable gardens, largely because they are used to seeing flawless and identical fruits and vegetables produced by industrial agricultural companies.

“There’s this idea that an apple has to be perfect,” she said. “But it can have a blemish, and you can still eat it, and that’s better than the dose of pesticides you would get otherwise.”

She hopes modern Western society will be able to overcome its “nature deficit disorder,” a term she will mention during her talk, referring to the increasing number of children who grow up with minimal exposure to nature.

“Everybody is plugged into technology instead of walking around or climbing trees for play,” she said. “As a result, there’s no built-in reverence or understanding for how living things work.”