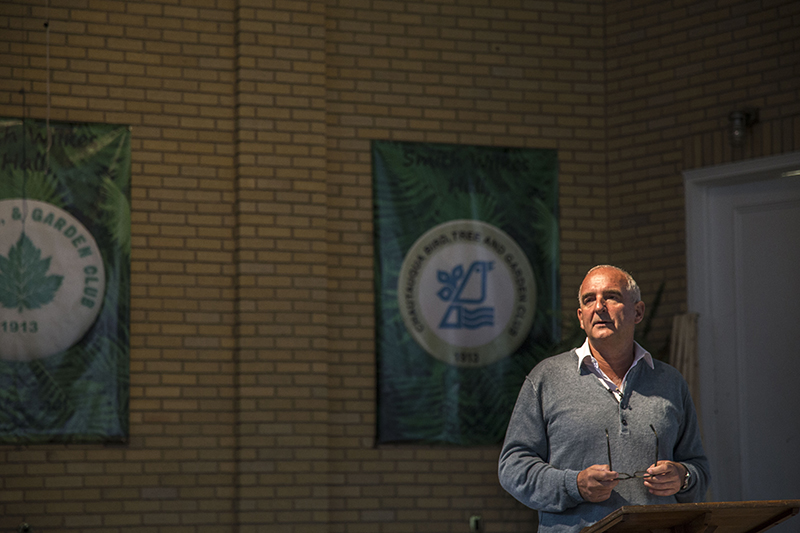 On the morning of Aug. 11, approximately 250 members of the Bestor Society and the Eleanor B. Daugherty Society gathered in Smith Wilkes Hall for the annual Scholar in Residence program, presented by the Chautauqua Foundation.

“It’s a great chance to look at European issues and look at three European societies — France, Germany and Italy,” Cohen said. “I think Europe tends to get a little neglected in political discourse in the U.S., so it’s great to see this degree of interest.”

Each day, Cohen focused on a particular nation, and said he was happy to come to the lecture as a scholar rather than a journalist, where he can reflect on issues much longer than he usually does as a reporter.

The Scholar in Residence program is offered exclusively to members of the Bestor Society and the Daugherty Society, which recognize donors who make an annual gift of $3,500 or more to the Chautauqua Fund and those who have designated a planned gift to Chautauqua, respectively. Geof Follansbee, vice president and CEO of the Chautauqua Foundation, said the seminar has been a great success since it was begun in 1991. The program is an expression of gratitude for the investments and care for Chautauqua provided by these members, he said.

The 2015 seminar was funded by a gift from the Edward L. Anderson Jr. Foundation, which has underwritten the Scholar in Residence program since 2010.

Anderson passed away in 2012, but his sons Steven and David continue to support many of the causes their father believed in, including this special seminar — a “most valuable thing,” Steven Anderson said.

“I think the program takes some of the Chautauqua themes and gets in deeper for some of the folks who are really committed to the Institution, as a kind of way of both giving back and thanking those who support it,” David Anderson said at last year’s event.

The brothers share their father’s love of learning and appreciation for the Chautauqua experience. Steven reflected on his time as a child growing up here in the ’70s and said he and David want to keep giving to the place that made them and their late father so happy.