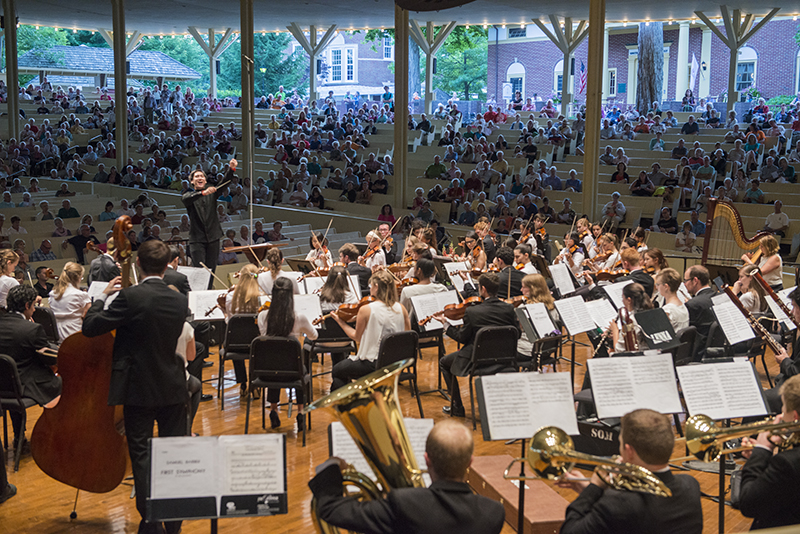 “I was walking by the Amp — I was carrying my cello — and this woman came up to me and said, ‘I’ve heard the Saint-Saëns ‘Organ Symphony’ so many times, but when you played it — I loved it the most,’ ” Camras said. “She loved the youthfulness and the energy we brought to it, and that’s special.”

At 8:15 p.m. tonight, the MSFO will take the Amphitheater stage for the last time this season. 2015 David Effron Conducting Fellow Dean Whiteside will start off the evening by conducting Strauss’ “Death and Transfiguration,” and music director Timothy Muffitt will follow by conducting Rachmaninoff’s Symphony No. 2 in E minor, Op. 27.

The Strauss piece allows him to communicate the composer’s passion and fervor through the orchestra, Whiteside said.

“This is perhaps our most difficult performance yet,” he said. “[‘Death and Transfiguration’] is very difficult because we have to make the orchestra sound spectacular, but at the same time we’re exploiting the virtuosic talents to an extreme.”

Strauss’ writing details death and dying, and then the passing on to another realm, Whiteside said. The music soars at times and drops in others, and the piece — which was written while Strauss was in his 20s — is one Whiteside chose carefully.

“It’s fascinating to think someone of our age possessed that brilliance,” Whiteside said. “I hope it serves as a culmination of our time here.”

The orchestra has undoubtedly grown in the past seven weeks, Whiteside said. Their endurance and perseverance with virtually no days off results in an unbelievably high quality of work, and their ability to work cohesively and understand one another has morphed over the season, he said, especially through productions like La bohème and the collaboration with the School of Dance.

“I sense just how much more flexible they are. They listen to each other more,” Whiteside said. “Playing an instrument — especially a string instrument — is physically exhausting in itself. They’re already very tired, so this week has sort of been the final push.”

Camras echoed Whiteside’s observation — she is tired, but that’s to be expected. Sailing into this evening’s repertoire from the high of the opera collaboration wasn’t easy either — it takes time to settle in and adjust, and having only a week or less to rehearse doesn’t exactly provide the best environment for that, she said.

Camras said she’s thankful she’s had the chance to work in so many capacities at Chautauqua Institution. Collaborations have unquestionably been her favorite — whether chamber music with her quartet or La bohème, she has loved the experience of mixing talents with other skilled artists.

“The opera was absolutely the highlight,” Camras said. “Here, it’s like you get the best of what you can do. With every performance, it’s always a feeling of, ‘This is what I do.’ ”

This evening’s program showcases to extremely difficult and challenging pieces the late Romantic period, Muffitt said. The Rachmaninoff — at 55 minutes, a lengthy piece of four movements — and the Strauss piece make for a repertoire that truly emphasizes what the MSFO is capable of, he said.

Rachmaninoff understood, distinctively, how to make an orchestra speak, Muffitt said. At the same time, the Strauss piece is something audiences should be on edge for — it’s something Whiteside can really put his heart and his talent into.

“It’s been really exciting to see the students come together and get to the point where they could put this together,” Muffitt said. “To see with each concert that we could take things a little bit further than before — it’s really been exciting. It’s been fun.”