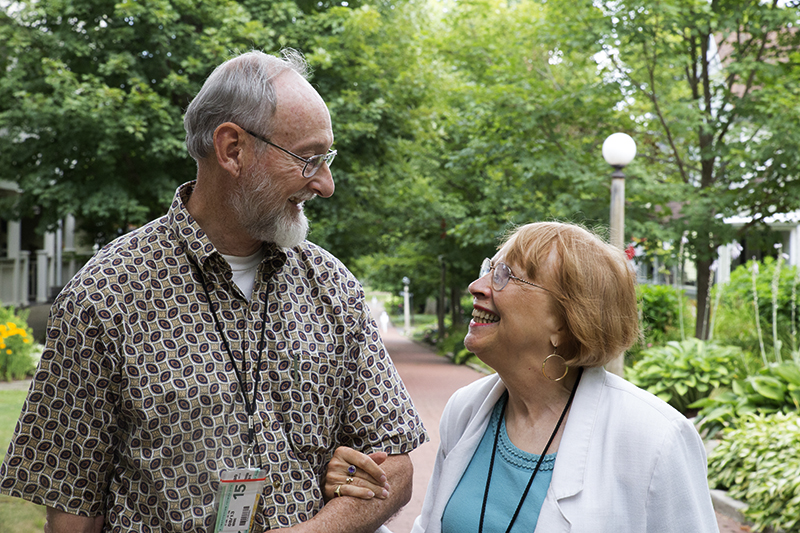 Reporters’ Note: This is the second in a four-part series about individuals who have found love on the grounds of Chautauqua Institution. The idyllic setting of Chautauqua Lake and the quaint streets with generations of
tradition paints the perfect background for love, young and old. We aimed to bring together stories of
love that were fostered by nights spent in the College Club, performances in the Amphitheater, evenings on porches and walks on the dock — love fostered by the mix and magic of Chautauqua.

Rowland Bennett and Linda Brady did not meet at Chautauqua Institution. They were not counselors at Boys’ and Girls’ Club, where they fostered their love during long lunch breaks, nor did they meet by chance on Bestor Plaza after a night performance.

Chautauqua brought them together a mere few years ago when they both were in their early 70s; they did, however, know each other well before that.

Linda first met Rowland in eighth grade social studies with Ms. Murphy at John Marshall High School in Rochester, New York. In accordance with alphabetical order, the two sat one in front of the other.

“She was right behind me, near the windows,” Rowland said.

A series of conversations budded into a friendship that carried into the latter years of high school. Linda extended an invitation to Rowland to join Youth for Christ, a city-wide group of like-minded youths.

“I don’t know if I attended because she invited me — that was certainly part of it,” Rowland said.

Though the two were inseparable friends, nothing more than companionship came out of it.

“We were buddies, nothing more,” Linda said. “I had said over the years, as lovely as Rowland was, there was just no chemistry.”

Rowland, who attributed his hesitation around Linda to his mannerly upbringing, saw Linda in a different light.

“The truth is, I had the hots for Linda,” Rowland said. “She was very attractive and appealing to me, and I tried to be around her as much as I could — talk to her, do things — but I never made any moves on her.”

The two independently chose to attend Wheaton College, stayed friends through the next stage of their lives, and both were in separate relationships by the end of school.

Linda married within one month of graduating to an older brother of a schoolmate, Jim. Rowland was invited to their wedding not only as a guest, but also as a groomsman. Before Linda walked to the altar, Rowland walked Linda’s mother down the aisle.

Rowland married Margaret, a college friend, two years after Linda was married. Rowland and Linda would stay in touch occasionally, through annual Christmas cards and special gatherings, but especially in cases of a tragedy.

Jim was killed four and a half years into his marriage to Linda, leaving her a widowed mother of two young children.

Years later, Rowland would divorce Margaret, and Linda married a college classmate named Bill. The Christmas letters were delivered each holiday season, and the two would see each other at milestone birthday celebrations over the last half of the century.

After Rowland built a house with his siblings near the Institution grounds nearly 10 years ago, he would subtly — and not so subtly — invite Bill and Linda to Chautauqua for a weekend getaway. The two of them never took Rowland up on his offer.

Bill passed away in 2011 of pulmonary fibrosis, and left Linda a widow for the second time.

“Being widowed the first time, I wondered if I had love in my heart for a second [person],” Linda said. “Being widowed a second time, I had no thoughts, no expectations for marrying again.”

Linda would attempt to find someone on a Christian dating website, but she “was not all impressed by the people who signed up for that.”

She had given up hope.

Yet, Linda still had not taken Rowland up on his persistent offers to visit Chautauqua. A high school reunion in the Rochester area would finally bring Linda to the Institution, a serendipitous circumstance that may have permanently brought Linda and Rowland together.

“When I came, I joined his family unit here: his sister- and brother-in-law [and] his cousins from Ohio,” Linda said. “Something about how beautifully he related with his family was very appealing.”

That, paired with a night where the two walked along the lake under a full moon, changed her feelings about Rowland almost instantaneously, she said.

The two became an official couple soon after her arrival and were married three years later in 2014 on New Year’s Eve at age 76, under one condition put forth by Rowland.

“[I said], ‘Linda, if we’re going to get married you have to understand it’s going to be Chautauqua all summer. That’s my only condition,’ ” Rowland said. “That was not a hard condition for her to accept.”

Chautauqua has become “one big date” for Linda and Rowland, where they have been able to keep themselves occupied; Linda is a member of the choir, and she and Rowland attend church and as many lectures and performances as they can. When Linda first arrived at Chautauqua, she was overwhelmed by the event calendar and felt as if she needed to do it all.

“There was one Sunday when I lined up on the weekly sheet seven things to do, starting with morning worship and going to the song service at night,” Linda said. “He looked at me and said, ‘I’ve never done seven things in the same day until you came along.’ ”

Rowland and Linda said being together so late in life has a different dynamic than their earlier years of love.

“Falling in love when you’re older is a unique situation, although most people who reach my age feel no differently inside,” Linda said. “You just look in the mirror and say, ‘Who is that person looking back at me?’ Finding love at our age was just as silly and romantic as when we were 20, but we bring a whole lot more maturity to the situation and a lot more idea of what we want in the relationship.”

The two hope to be together to see their 20th anniversary, but still don’t completely comprehend how they ended up together.

“Our falling in love was a total surprise,” Linda said. “We still pinch each other. Who would’ve thought that we’d be together after all these years? It’s a real blessing.”