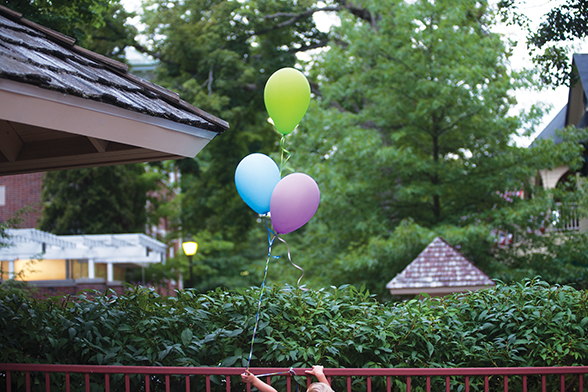 David Mosley plays with three of the balloons that lined the perimeter of the Amphitheater during Old First Night, 2007.

Anyone expecting fireworks at Friday’s dialogue meeting on the Amphitheater project may have left the session disappointed. What had seemed to many as a potential showdown turned into a frank but civil give-and-take between Institution President Tom Becker, other panelists and an engaged community audience. The subject was historic preservation in the context of the Amp.

The 8 a.m. meeting, the last of the scheduled Friday public input sessions, had the feel of an Interfaith Lecture in the same Hall of Philosophy venue. People arrived early, the benches were filled and spectators spilled out onto the grove toward the Literary Arts Center at Alumni Hall. The place was buzzing well before moderator and Institution consultant Elliot Fishman kicked things off.

Becker was joined by Bonnie Halda, the National Park Service’s Northeast Region chief of preservation assistance; Caleb Pifer, executive director of the Historical Society of Erie County, Pennsylvania, and member of the historic preservation advisory panel convened by the Institution in response to Halda’s written recommendations in April; and John Shedd, Institution director of operations and administrator of Architectural and Land Use Regulations.

Becker offered a few introductory remarks. In reviewing how the Institution’s built environment has sometimes matched its evolving programmatic requirements — and sometimes not — he noted that Elizabeth S. Lenna Hall was the first new perfomance facility on the grounds in more than 60 years when it opened in 1993.

“If we are to maintain [resident artistic programs], … it’s because we are committed to art — to the value of art in society,” he said, “and to our own ability to bring together people that can work together in a collaborative away and both honor a canon and create new work. And that’s why we have such a deep investment in the arts.”

The Amphitheater is the community’s primary assembly place to see and hear the expression of those art forms, and for lectures and worship, he said. To do that work in a way that is safe, accessible and functional — in that space — is one of the primary objectives of any project.

He then introduced Halda, who was accompanied on this and her March trip to  Chautauqua by Kathy Schlegel, the NPS Northeast Region’s historic landscape architect.

A licensed architect, Halda has worked in historic preservation for 36 years. She said that the U.S. Department of the Interior’s National Park Service is the steward of the nation’s fewer than 2,500 properties whose significance merits the designation of national historic landmarks. Chautauqua is one.

At the Institution, Halda said, “that national significance is rooted in the ideals that sprang up here more than a century ago and grew to what we see today.”

She explained the significance of Chautauqua’s designation as a historic district, comprising an “incredible collection” of 600 public and private buildings, including the Amphitheater, and commended the Institution and individual property owners  for their passionate care.

After the Institution asked the National Park Service for assistance, Halda and Schlegel visited in March, received a comprehensive tour of the district and the Amphitheater, partook in “meaningful dialogue” and then developed a list of recommendations, which she briefly outlined.

Emphasizing that her role was advisory, Halda recommended that the Institution develop a master plan for the historic district as a whole, and within that overall picture, pursue several specific Amp-related items: collect a history of all structural changes over the history of the building, engage a structural engineering firm familiar with historic buildings to assess the Amp and, lastly, convene a panel of preservation architects and historians to take a fresh look at the Amp.

The Institution got to work immediately on her recommendations, Halda said. Several results are already realized and were discussed later in Friday’s session.

Fishman then called upon Pifer to describe the advisory panel’s process, which consisted of seven separate meetings, some on the grounds and some by teleconference.

The group focused on “what makes the Amphitheater the Amphitheater,” Pifer said, ranking character-defining qualities by level of importance to the facility’s look and feel. The panel reviewed the Institution’s current plans, and also reviewed the plan submitted by CJS Architects at the behest of the Committee to Preserve the Historic Chautauqua Amphitheater.

The panel’s report was submitted to the Institution late Thursday afternoon.

“There’s nothing earth-shattering,” Pifer said. “Assuming the Amphitheater can be shored up — and regardless, it will need shoring up — could the existing structure stand and accommodate all of the programs that the Institution has outlined? No.”

Pifer also noted that the Chautauqua Challenge, which serves as the Institution’s mission statement, adopted in 1974 and amended in 2000, does not mention preservation and outlines Chautauqua as “very much a programming organization.”

“As a trustee, when asked that question — preservation versus programming — if you’re doing your job, every single time, you have to come down on the side of programming,” he said.

In its report, the panel has recommended that the Institution consider adding preservation to its mission, he said.

Fishman then asked Shedd to review initial findings from a structural engineering consultant.

The Institution’s engagement with Old Structures Inc. of New York City fulfilled another of Halda’s spring recommendations — to supplement earlier engineering assessments with a comprehensive analysis to understand the current condition of the Amp. The final report is still being prepared. Shedd said the Institution will release the summary findings when they are received.

“The Amp is safe for the summer,” Shedd said. “[Marie Ennis of Old Structures] determined loads that occur during normal summer conditions can be managed and handled by the existing structure.”

Ennis’ assessment also modeled winter conditions, and revealed that the Amp’s structural elements are not capable of handling certain snow and wind loads, Shedd said. Twelve of the 16 vertical roof support columns exceed allowable drift, and while the main steel roof trusses are sound, their connections to columns and footings are of concern. The models show up to 12 inches of sway in parts of the Amp during winter conditions.

Based on Ennis’ findings, Shedd said, the Amphitheater will need to be reinforced this fall in anticipation of the upcoming winter. X-shaped braces, to be removed before the 2016 summer season, must be installed to buttress the bowl’s vertical support columns. Within two years, the Amp will need further structural reinforcement.

Fishman then opened the last 30 minutes of the session to questions.

Audience member Aaron Sorensen asked how, as president, Becker planned to bring together a “highly fractured and torn community.”

“I recognize that on this issue that there can be honest and vigorous disagreement,” Becker said. “I don’t imagine that there’s going to be an event or even a fact that’s going to eliminate all that. It’s a values proposition.”

Becker disagreed with the characterization of the current environment on the grounds.

“I don’t see a terribly [divided] community. We disagree on this subject, and that part is true,” he said. “What I hope is, at the end of the day, though part of the population will be disappointed with [whatever decision is made], we can look one another in the eye and respect our differences in opinion.”

Becker said he is used to passionate disagreement at Chautauqua, whether about deliberations of the Architectural Review Board, one-way streets, the political leanings of speakers or what dogs leave behind on their walks.

“One of the things I deeply respect and admire about this place is that we hold together as community through all those disagreements,” he said. “I sincerely hope that’s the outcome of this, no matter which way we go.”

As has been the case all summer, throughout the public input segment, Chautauquans were eager to offer their views. These ranged across issues such as the effect of Amp decisions on residential property values; the need to keep our National Historic Landmark District status; the absence of a preservation-based plan to compare to the Institution’s current project; perceived conflicts between the Institution’s mission and real practices; handicap access in the current and projected structures; Chautauqua’s need to thank those donors who have generously pledged to the project; safety for audiences, performers and workers in the Amp; and the need for the Institution to better communicate with the community in the future.

The Institution’s 8 a.m. Monday and Wednesday sessions on the Amphitheater renewal project continue this week and in Week Eight.