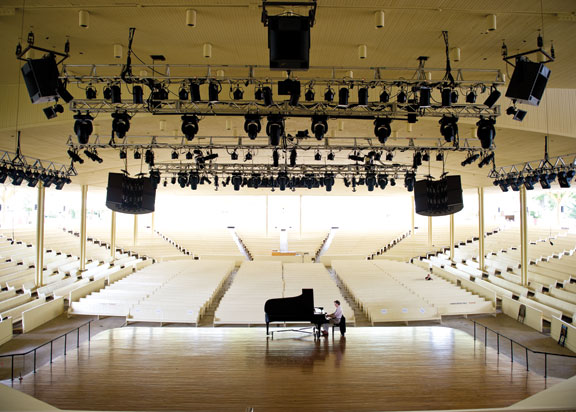 The future of the Chautauqua Amphitheater has been the subject of much public discussion throughout the 2015 season, leading up to a likely board of trustees vote on a proposed project on Aug. 29. (Adam Birkan | File Photo)

Over the next two days, Chautauqua Institution President Tom Becker will appear in two public forums that will focus on the future of Chautauqua’s centerpiece Amphitheater.

At 8 a.m. Friday in the Hall of Philosophy, the last of six Institution-sponsored public dialogues is expected to cover preservation as it pertains to the Amp and Chautauqua’s National Historic Landmark District status overall. The federal arbiter for historic preservation is the Department of the Interior’s National Park Service, whose chief of preservation assistance for the Northeast, Bonnie Halda, will join Becker.

Halda’s two-day March visit to Chautauqua and subsequent April report made two principal recommendations. These were to engage a leading historic preservation structural engineering firm to assess the current structural integrity of the Amp, and the possibilities of a historical rehabilitation of the facility, and to convene a panel of eminent local and regional preservationists to identify key character-defining qualities  of the current structure that should be retained in any future Amphitheater.

As Halda returns to help guide Friday’s Amp meeting, Chautauquans can expect to receive shortly more detailed information than what has been available from both the structural engineers and the preservationists. No further Friday public meetings are presently scheduled on the Amp project.

At 9 a.m. Saturday in the Hall of Philosophy, the Chautauqua Property Owners Association will hold its 2015 annual business meeting. At 10 a.m. is the annual meeting of the Chautauqua Corporation, followed immediately by the Open Forum hosted by the Institution’s board of trustees. Most expect that the future of the Amphitheater will be the primary discussion topic.

The Institution’s ongoing Monday Amp tours and Wednesday sessions on history and performance experience have seen steady crowds. As the Friday public dialogue sessions unfolded, attendance rose to exceed the capacity of the Hall of Christ.

The Friday Hall of Philosophy meeting will bring to a close a six-part series of public meetings on the future of the Amp.

Becker laid the foundation for the summer sessions when he reported to property owners in January that he had asked the board of trustees to postpone a decision on the Amp project to permit the dialogue that has taken place this summer.

To some observers, the increasingly animated exchanges that have characterized the Friday sessions have centered on the conflict between the Institution’s asserted vision for the next 100 years and a sense among some members of the community that they have not been heard.

The Institution has been presenting its vision for the Amphitheater to the community as plans have evolved since Serena Sturm Architects, Ltd., was selected to lead the project in 2011. Many around the grounds will recall the briefings in the Amp and in the library over several seasons conducted by former Chautauqua official Charlie Heinz and current John Shedd, director of operations and administrator of Architectural and Land Use Regulations. Numerous study and advisory groups collected input from community members. A model of the proposed new Amp has been on display in Smith Memorial Library lobby for three years.

But for many, a process of collaborative, transparent engagement between the administration and the community was fractured by reports first surfacing at the end of last summer. A project that had been developed as a historic rehabilitation had become instead a demolition, with an entirely new building rising in place of the Amp, which has stood for more than 120 years.

Construction consultants advised for many reasons — cost, time and worker safety primary among them — maintaining the project as a historical rehabilitation would be impractical at best and nearly impossible at worst, administrators said.

On several occasions, the Institution did not handle the flow of information well as the project began to evolve, Becker said. What the Institution regards as an oversight was perceived by some as deception. Toward the end of 2014, there was sufficient discord that Becker proposed the delay in implementing the project to allow this summer’s dialogue.

Chautauqua Institution Board of Trustees Chairman Jim Pardo spoke to the community in an open letter in the spring 2015 Chautauquan. He affirmed the board’s role as final decision-maker for any Amp project, and described the board as having been “closely involved in the process surrounding the Amphitheater project.”

Pardo said the board’s role is to “hear different perspectives of Chautauquans and decide on a plan of action that … best balances competing views while substantially achieving the project’s fundamental goals. … This will require the board to make choices — many of which may prove hard rather than easy and complex rather than simple.”

The board of trustees has been visibly represented at all the Friday sessions this summer, as well as at Monday tours and Wednesday information sessions as well. The board is scheduled to deliberate on the Amp project at its next regular meeting Aug. 29.

‘We have heard you’

Shedd has often commented this summer that the administration has listened to and taken into account community input since the project began. He ticked off some examples that came to mind.

“We heard from the community often about their concern that the Amp project could not be completed in one off-season,” Shedd said. “We found that we agreed. We have altered our planning. The overall schedule was changed to what we are now calling an 18-month schedule. The plan, if the board gives the green light, calls for much more preliminary work to proceed prior to the 2016 season so we have a better chance to finish the job prior to the 2017 season.”

Preliminary jobs would include site prep work; concrete and steel prefabrication; mechanical, plumbing and electrical preparations; securing the proper insurance, and staging some materials across Route 394 on Institution-owned property.

“The plan for the [back-of-house] was significantly redesigned to meet the community’s aesthetic concerns,” Shedd said. “We have incorporated more historic characteristics in the design for the [back-of-house]. Also, we are likely to change the side walls of the orchestra seating area to reduce the height and improve the appearance to match the historic seating patterns. This came from community input, too.”

Other changes Shedd cited were more aesthetic details in support columns to match existing details; switching back to center handrails in the aisles instead of railings at the end of each bench; changing the stage back wall to improve acoustics; still trying to figure out how to keep Peters Bridge in the picture; and reviewing again the routes construction vehicles might take in and out of the grounds. He also said retaining part of the current roof structure is still on the administration’s wish list for contractors.

One longtime Chautauquan said the administration and the community are “like a married couple. Communication is a key — maybe the key — for a successful marriage. And communication involves sharing, acknowledgement and action. The Institution has spent the summer trying to restore that essential communication.”

George Murphy, vice president and chief marketing officer, has statistics on how many Chautauquans attended the Institution’s weekly tours, historical and programmatic reviews and Friday dialogues.

“So far, we’ve attracted 1,604 altogether to our sessions,” Murphy said. “The numbers varied from week to week, but it was gratifying that by far our biggest turnout was for [the July 31] public input session.”

Shedd said the Monday Amp and library model tours invariably surprised attendees, especially about the run-down nature of the back-of-house.

“I can’t count the number of people who thanked me and said they had no idea how bad things have gotten,” he said.

The Fridays started contentiously in a preseason session for property owners and remained intermittently fractious throughout the season.

Because many Chautauquans were not able to attend multiple Friday sessions, questions were repeated from one meeting to another. Examples were construction traffic concerns, the fate of Peters Bridge, compliance with federal requirements for the disabled, the depth of and need for an orchestra pit, sightlines and perimeter concourses in a new Amp, acoustics, seating capacity, ventilation and air flow, and groundwater relocation.

Some events and information stood out. Following repeated calls by the Committee for the Preservation of the Historic Chautauqua Amphitheater for an appearance by its consulting architect before one of the Friday meetings, Dirk Schneider of CJS Architects stood beside Institution lead architect Marty Serena for almost all of the Week Four session, comparing and contrasting their visions for the Amp.

Shedd presented accumulating evidence of structural deterioration of the Amp. Since the Institution began measuring 17 years ago, several of the steel columns — which ring the bowl and support the roof structure — have slipped downhill, the bottoms moving as much as 6 inches in the direction of the lake while the tops remained in place. And while consulting structural engineers declared the Amp safe for the summer, the Institution will now install steel X-braces across the bowl in the off-season to buttress the roof structure against the ravages of Chautauqua wind and snow.

What is Past is Preamble

The administration and the community have now come to the end of the formal public dialogue on a project which is by far the largest capital project ever proposed for Chautauqua. Meetings and events this weekend should have a strong influence on the path ahead.