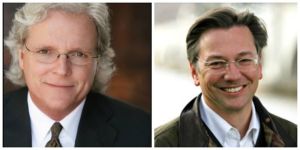 To end Week Five’s theme of “Art & Politics,” Chautauqua Institution will have not one, but two speakers give their takes on creating political ad campaigns.

Fred Davis III and Mark Putnam, political advertising strategists who generally work for the Republican Party and Democratic Party, respectively, will speak at 10:45 a.m. today in the Amphitheater.

Both speakers will take 15 minutes to display and discuss several examples of their work from a variety of races, how each piece was created and their resulting effect for the running candidate. They’ll also speak about their times in their careers on their side of the political spectrum.

Putnam said devising political ads is like crossing a tightrope. In doing so, Putnam has had to stay balanced — something he hopes to impart to the audience.

“There really is an art and a science to every type of advertising, and in politics, it’s the artistic side of it that is sometimes neglected,” Putnam said. “So I think that having Fred and myself there is an interesting choice because we both believe that you have to have both sides of the equation.”

Both said they connect on the same wavelength, despite working for different political parties.

“Fred is the person on the other side of the aisle who I think has the approach most similar to mine, which is to figure out how to find that intersection between creativity to make an ad that’s compelling,” Putnam said.

Davis started his career in political advertising in 1994 when his uncle — then-Congressman James Inhofe — asked Davis to save his campaign. Inhofe won the election with a huge swing just 90 days after Davis started.

Putnam has worked as a political campaign strategist for nearly three decades, even aiding President Barack Obama in his re-election campaign. Putnam also had nine ads recognized as the “Best Ads” of 2008, 2010 and 2012 by The Washington Post, and has won 54 Pollie Awards for excellence in political advertising.

Davis and Putnam have made ads for numerous political figures, including presidential candidates and mayoral candidates. Davis said he hopes the audience will walk away from their talk with a newfound respect for political ads, and better knowledge.

“It’ll give them a different lense to study ads through, because they’ll know what the people that are producing them are going through and trying to get the goodness of somebody across,” Davis said.