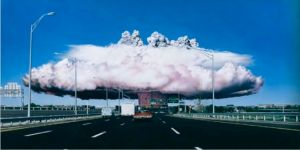 Chautauqua Institution is a place for the visual arts. From Special Studies courses to the School of Art, there are classes in everything from art history and theory, to how throw a pot on the wheel.

But rarely is the end of that process considered: how art is shown in galleries.

At 7 p.m. today in the Hultquist Center, Jack Rasmussen, director and curator of the American University Museum at the Katzen Arts Center, will speak on “Curating in the Capitol,” bringing his experience of organizing art shows in Washington D.C.

“Government has long used culture as a weapon or a tool,” Rasmussen said. “But I’ve long been interested in how you convey the culture of a place or a region in an exhibit.”

Among the shows he is currently curating at the AU Museum is a commemoration of the 70th anniversary of the Hiroshima and Nagasaki atomic bombings, in collaboration with the Hiroshima Peace Memorial Museum and the Nagasaki Atomic Bomb Museum. The show includes more than 20 artifacts from the bombing and the “Hiroshima panels” artists Iri and Toshi Maruki painted to document and protest.

“My favorite show [to curate]  is really showing an artist in depth,” Rasmussen said. “But my second favorite is a show with a political edge.”

Rasmussen received a B.A. in art from Whitman College and a M.F.A. in painting from AU. He left the world of producing art, though, to pursue a curatorial career instead — although the choice was not entirely his own.

“I had to make a living,” Rasmussen said. “But I discovered I really liked it.”

Rasmussen worked as assistant director of the Washington Project for the Arts in D.C. in 1975, when it launched. Now, the WPA is the largest visual arts-based membership organization in D.C., according to their website, sponsoring exhibitions, lectures and other events based around the visual arts.

After he left the WPA, Rasmussen opened the John Rasmussen Gallery in 1978, which was “a vital part of D.C.’s art scene until he closed in 1983,” according to Rasmussen’s AU biography.

Although the gallery is long closed, all the records were preserved by the Smithsonian’s Archive of American Art — “everything from receipts to angry letters from artists,” Rasmussen said.

Rasmussen has since worked in galleries in Baltimore and Napa, California, before returning to run the AU Museum, where he continues to curate art among Washington politics.