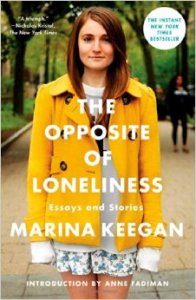 When someone dies, people often struggle to find the right words to honor them.

But when Anne Fadiman’s student Marina Keegan died, she knew exactly whose words she would use: Keegan’s.

“As soon as Marina died, it was very obvious to me and to her friends and to her family that the best way we could honor her was to gather her work together and make it a book,” Fadiman said. “My work in making that happen — dealing with the publisher, editing the book, working with her parents to do all of that — was so the central part of Marina would not be forgotten.”

Keegan is the author of The Opposite of Loneliness: Essays and Stories, the Chautauqua Literary and Scientific Circle selection for Week Four. Keegan died in a car accident just days after she graduated from Yale University in 2012.

Fadiman, one of Keegan’s former professors, will discuss Keegan’s work at 3:30 p.m. today in the Hall of Philosophy for Week Four’s CLSC Roundtable.

In a haunting poem from The Opposite of Loneliness, Keegan wrote, “And I cry because everything is so beautiful and so short.”

Though Keegan’s life was tragically cut short, her work lives on through the efforts of her family, friends and Fadiman.

The book’s inclusion in this year’s CLSC programming is partly due to Chautauqua Institution President Tom Becker, who discovered the book while on an airplane. Becker said he found the title “arresting,” and he was also intrigued by Anne Fadiman’s name on the cover.

Fadiman has previously visited Chautauqua as part of the “Roger Rosenblatt and Friends” lecture platform in 2010. She is a former student of Rosenblatt and the author of multiple books, including The Spirit Catches You and You Fall Down and Ex Libris: Confessions of a Common Reader.

Becker said he was struck by Keegan and The Opposite of Loneliness after reading the book’s introduction, which Fadiman wrote.

“You don’t even get through the introduction and you’re already in love with her,” Becker said.

According to Fadiman, this type of impression was typical of Keegan, who also acted, wrote plays and did spoken word poetry.

“She came on pretty strong and had a powerful personality,” Fadiman said.

Fadiman said Keegan’s various talents gave her a singular voice — both spoken and written — which is what she admires the most about her work. She said Keegan’s voice is “honest, unpretentious and unaffected.”

“It sounds like her — that’s it,” Fadiman said. “Many of my students are very stylistically polished, but they don’t really know what they sound like because they’re imitating others’ styles. Marina had the confidence to sound very much like herself.”

Fadiman taught Keegan in a class called “Writing About Yourself,” in which Keegan wrote the essays “Against the Grain,” “The Art of Observation” and “Song for the Special.” All three appear in The Opposite of Loneliness.

Fadiman said “Against the Grain” hits her strongly when she rereads it, because it details Keegan’s lifelong struggle with celiac disease and her relationship with her mother.

“As a mother myself, I have a daughter who’s exactly Marina’s age, who graduated from college the same week that Marina did,” Fadiman said. “So I very much identify with Marina’s mom, Tracy Keegan, who I’ve gotten to know well. And I’ve found that to be a beautiful portrait of the arc of their mother-daughter relationship.”

Fadiman said that the essay that “breaks her heart” when she reads it now is “Song for the Special,” the final piece in The Opposite of Loneliness. She said reading it after Keegan’s death gives it a “very special resonance.”

“I used to think printing things made them permanent, but that seems so silly now,” Keegan wrote in “Song for the Special.” “Everything will be destroyed no matter how hard we work to create it. The idea terrifies me. I want tiny permanents. I want gigantic permanents! I want what I think and who I am captured in an anthology of indulgence I can comfortingly tuck into a shelf in some labyrinthine library.”

Thanks to the efforts of Fadiman and Keegan’s family and friends, her work can be put on that shelf.

“I think it’s such a generous act — Anne Fadiman, I’m sure, would not say it that way — but on her part, to take the time to deal with her own grief in such a constructive, loving, respectful way,” Becker said, “I thought it was touchingly unusual.”

Also unusual was the choice of the book for this year’s CLSC list, said Sherra Babcock, vice president and Emily and Richard Smucker Chair for Education.

“It’s a different kind of book for the CLSC,” Babcock said. “It’s a younger book, and it’s very popular. The essay ‘The Opposite of Loneliness,’ went viral — big-time viral — and that caused a lot of young people to want to read the book.”

Babcock said she’s interested to see how the audience at Chautauqua takes to the book. She believes Keegan’s story — and her uncommon voice — will be affecting for many, despite Keegan’s youthful disposition.

“It’s the beginning of a talent and, sadly, the end,” Babcock said.

While Babcock said The Opposite of Loneliness is not the typical CLSC book, she found it to be a fitting choice for Week Four’s theme, “Irrationality.”

“I think it’s completely irrational when a young person dies,” Babcock said. “It’s just against everything that we know.”

Becker said he found the book’s ties to the theme of irrationality lie in the contrast that it — and Keegan — represents.

Becker felt it was important to present Keegan’s book to Chautauqua because “she was going to make an impression on the world — you could just feel it.”

“And here, she’s dead at 22,” Becker said. “There’s a tragedy in that, and yet what this book does, I think, is to celebrate the life she did have and to point out that — dead at 22 or not — she lived her life in a really full and engaged way. So I think it’s important in this community, because this is a community of people who read and who celebrate writers. We often celebrate writers that are at the peak of their abilities. And here’s kind of a quiet celebration of a writer who was at the front end of hers.”

Part of that celebration will be in the format of today’s presentation, which will feature Fadiman in conversation with Babcock. Fadiman will read from Keegan’s work and answer questions as well. Fadiman said she can’t wait to present Keegan’s work to a group of such committed readers.

“The opportunity to bring Marina’s work to such a large, enthusiastic and literary audience — and they’re going to go back home and talk about Marina, talk about the book — that is exciting to me,” Fadiman said.

What Fadiman said she misses most about Keegan is seeing her life and potential unfolding in front of her.

“I miss the sense of curiosity about her future, which I thought was just wide and endless,” Fadiman said. “I miss the next email from Marina that would make me laugh and would also have a link to her latest piece or story.”

Now Keegan’s future is in Fadiman’s hands — or her voice, at least. Fadiman said reading excerpts from Keegan’s work aloud will let people see who the real Marina was.

“I’d love it if the entire time I could just read her work aloud and not say a word myself,” Fadiman said.

Becker said the beauty of Keegan’s book is he thinks it does what all great books should do.

“I felt like at the end of all of that, I knew her,” Becker said.