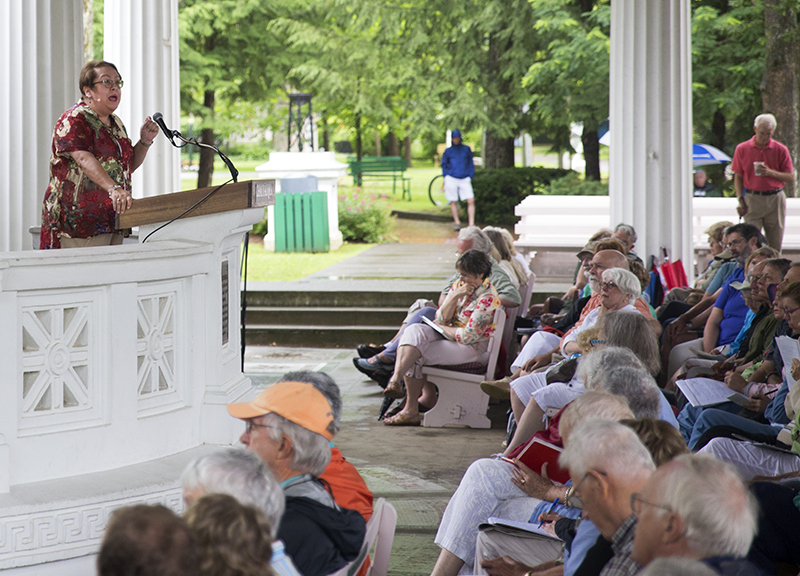 Daisy L. Machado delivers the Interfaith Lecture Tuesday in the Hall of Philosophy.

When stuck thinking about how to solve a problem, one tactic is to step back and approach it from a different angle. So, when stuck on the political issues behind illegal immigration, Daisy L. Machado recommended her audience instead discuss the moral ones.

Machado delivered her lecture, “Immigration, Faith and the Public Square,” Tuesday in the Hall of Philosophy, continuing Week Three’s theme on immigration. She argued that the politics behind immigration obfuscate the morality of the issue, and that anyone who claims to be religious should see it as such.

“Too often, immigration debates are conducted solely from the standpoint of what is good for us,” Machado said. “I want to think of immigration as a moral problem that will then be put into the context of global justice.”

Using simple logic, Machado said illegal immigration is only a byproduct of a broken legal immigration system, slanted against Mexican people. According to her figures, the average wait time for a green card for the unmarried child of a U.S. citizen is six years. If that child is Mexican, that figure increases to 16 years. She continued that there are currently 4.4 million people in line to enter America legally.

Due to these long wait times and often dire economic or violent issues from immigrants’ home countries, it is inevitable they try to enter America illegally. The journey is extremely dangerous and often fatal for these immigrants. Currently, U.S. courts that determine whether an immigrant qualifies as a refugee are overwhelmed by the number of cases. For these reasons, she says, helping these people and fixing the system is simply the right thing to do.

“We, as citizens of this nation, should care that the system’s broken; this should matter to us,” Machado said. “Why? Because a broken immigration system opens the way for illegality; for human trafficking; for exploitation; for human suffering.”

While she spoke specifically in regards to her own faith (Christianity), Machado said all religious institutions are obligated to help those in need and are well equipped to do so. Because they offer an open forum for dialogue, have predispositions to help those in need and call their members to action when there is a problem, they should all help people in whatever way they can.

“Faith calls people out of themselves and compels them to seek the common good,” she said.

Machado then asked the attendees of the lecture to take action on the issue and apply public pressure on their leaders to take better care of those who seek entrance to the U.S.

Machado closed her speech with an excerpt from Jim Wallis, the president and founder of Sojourners.

“We have arrived at a critical moment of significant moral importance,” Wallis wrote in Time. “As I often remind legislators and pastors alike, the policy debate is over. It is just a matter of time before immigration reform is enacted. The only questions left to decide are how much more suffering we will tolerate as a country and how many more families we will tear apart because our leaders refuse to put people before politics.”