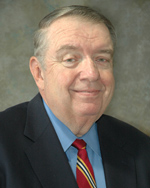 For the 28th consecutive season, political scientist David Kozak will give his lecture on the American political climate.

He’s decided it will also be his last.

“It takes a bigger chunk of my time,” Kozak said. “Politics have changed. It’s become much more polarized and not as much fun to talk about.”

Kozak, distinguished professor of public policy and director of Leadership Erie at Gannon Univerity, has given lectures at the Institution since 1988, through seven presidential elections and three mid-term elections. Nearly every year, Kozak has given his insights predicting what will happen, but he said even he can’t predict the outcome of the 2016 election.

At 3:30 p.m. today in the Hall of Philosophy, Kozak will talk about the past seven general elections. They’ve all been unique, he said, and he’ll compare them to the current race for 2016, including patterns he has noticed.

“There’s patterns that we see-saw back and forth, nobody’s dominant, there’s a short shelf life for movements,” Kozak said.

The political scientist will also talk about the new swing states that have emerged in the past few terms.

Though the familiar swing states ­— Florida, Ohio and Pennsylvania — haven’t lost their relevance, with fewer swing voters every election, Kozak said, the name of the game is mobilizing their bases.

However, even with fewer swing voters, new swing states emerged, including Virginia, Colorado, Nevada and New Mexico. Kozak said in the last three, the Latino voter population is huge. With the rash language from presidential candidate Donald Trump about undocumented Mexican immigrants, it’ll be difficult, he said — but not impossible —  for Republicans to gain the Latino vote in any of those states.

The ultimate saving grace for Republicans, Kozak said, might be their label as the “out party” since many look to want change, which usually happens every four to eight years.

Most notably, after the 2014 midterm elections, the Democrats lost their majority in the Senate. Kozak said this could be a potential for the Democrats to take back the upper house — but only if they can retain their electoral base in the first post-Obama election.

Kozak also said Sen. Bernie Sanders, I-Vermont, could be the fresh candidate the party might want. Hillary Clinton, he said, still has history and been in the spotlight since the 1990s, but may be losing popularity from her family’s overexposure. This same fact may also doom former Florida Gov. Jeb Bush.

Many Americans focus on the personality and current frontrunners in a phenomenon he calls “horse-race mentality” which distracts voters from more pressing issues like climate change.

“The big overall conclusion is [that] this is a time for enormous change,” Kozak said. “Not just [to] expect the unexpected but the two key concepts are volatility and fluidity. We really don’t know what’s going to happen which makes it really fun to watch and participate in.”