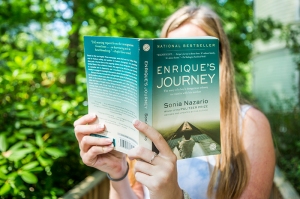 A little black bag, a pen, a notepad, some toilet paper, some money — Sonia Nazario didn’t carry much on her freight-train travels as she worked to document the journey thousands of immigrant children make each year, crossing through Central America and Mexico to reach the United States.

“I plainly thought that I could write notes, but I realized on my first train ride that I was going to have to hold on with both hands for dear life because the train rocked violently from side to side,” Nazario said. “So I ended up putting a micro cassette recorder in my chest pocket and having migrants talk into my chest all day long.”

At 2 p.m. today in Room 101 of the Hultquist Center, the Chautauqua Literary and Scientific Circle Young Readers program will meet to discuss the young reader’s adaptation of Enrique’s Journey with author and Pulitzer Prize-winning journalist Nazario.

Nazario originally took on telling the stories of immigrant Central American children as a six-part series for the Los Angeles Times. After weeks of research with attorneys, the U.S. Immigration and Naturalization Service, school counselors of immigrant students and detention center employees and detainees, Nazario met Enrique, a teenage boy from Honduras, and spent two weeks interviewing him in May 2000 before setting out to recreate his odyssey.

From May to September in the same year, she and photographer Don Bartletti traveled from Honduras, through Guatemala and 13 of 31 Mexican states by the same path Enrique followed.

Matt Ewalt, associate director of education and youth services, said young readers will have the chance to hear Nazario break down her own story of delving into the lives of migrants.

“[Sonia] will be taking us inside the process of telling this story,” Ewalt said. “It’s having her reflect on her time with children who are not much older than the Chautauquans who are reading this book.”

One of the questions that might make its way to the surface, he said, was that of altering a work for younger readers.

“What is that editing process like?” Ewalt said. “I would think it would take the content and make sure that it is still challenging for young teenagers and yet be at an appropriate age level.”

Nazario’s effort to retrace the steps Enrique took to get to the United States might not be age-appropriate for everyone — throwing herself into these stories nearly cost her life.

Low-hanging branches almost swept her off the train, gangsters grabbing at her made her afraid for her safety, scorching-hot train tops still forced her to cling to them. She even went 16 hours without a trip to the bathroom.

“What you discover is if you’re on a sizzling hot piece of metal and you don’t drink any water, you can actually go about 16 hours without going to the restroom,” Nazario said.

Her trip was worth the hardship, though, she said. Migrants shared their stories with her, explained to her their own journeys, while others who had met Enrique helped her piece together his trip.

“It took me to my breaking point at times, the experience, but they could see that I was willing to do a lot, and that carried a lot of weight with them,” Nazario said.

Most journalists, she said, would have made calls from the comfort of their desks to write a piece on immigration. For her, it was quite the opposite.