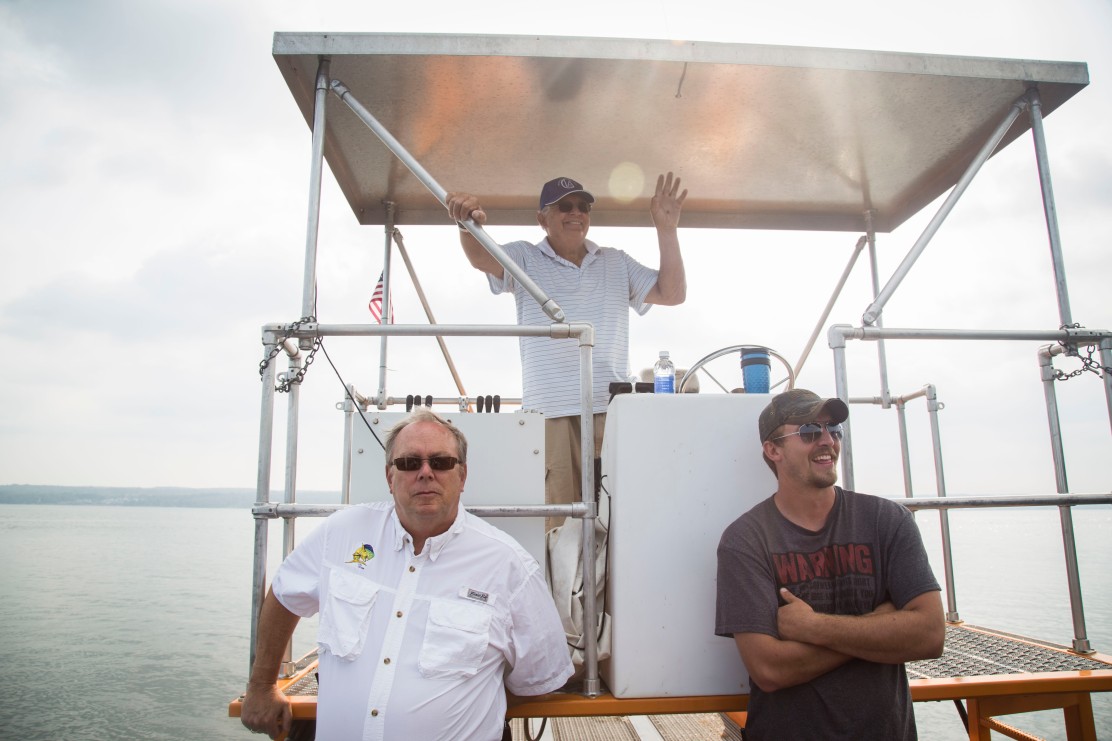 Weeds are pulled from the lake to ensure health and beauty of the lake. “It’s very rewarding to look out at the lake when it’s clean or dirty and know that you were a big part of keeping it clean.” Said Luke Peterson, crew leader.

Field Supervisor Luke Peterson holds up weeds covered with algae pulled from the lake. “It’s very rewarding to look out at the lake when it’s clean or dirty and know that you were a big part of keeping it clean.” Said Luke Peterson, crew leader.

Chautauqua Lake is lucky to live in a region that recognizes its value. According to Dave McCoy, the Chautauqua County Watershed coordinator, Chautauqua County is the only county in the state to use two-thirds of its occupancy tax for tourism and one-third specifically to protect lakes and waterways.

That one-third goes to organizations such as the Chautauqua Lake Association, whose mission to provide lake maintenance services.

Doug Conroe, the former president of the CLA and former director of operations at Chautauqua Institution, will present some of the equipment the organization uses to remove nuisance plants from the lake and discuss the general goals and activities of the CLA at tonight’s lake walk. The walk begins at 6:30 p.m. at the covered porch at Heinz Beach.

“The idea will be to have people see, feel and touch the equipment, understand how it works, what it does and why we need it done,” Conroe said.

The seaweed is then composted into soil and sent to local farmers who use it as fertilizer. Don Emhardt, the director of operations for the CLA and Chautauqua town supervisor, said it takes about three years for the seaweed to decompose into fertilizer.

Removing seaweed from the lake only solves part of the problem. Though the CLA and other organizations — notably the Chautauqua Watershed Conservancy — have made strides to reduce the amount of nutrient-rich runoff that enters the lake, the input of nutrients has not stopped.

One of the largest contributors to the nutrient problem, which happens to be one of the most difficult to address, is sewage.

In a few communities in the north basin of the lake, such as North Harmony, some of the homes near the lake are not connected to sewer systems. Butler said the sewage from those homes is treated by individual septic tanks, which are generally older and were built when regulations were more lax.

Though the CLA would like to install sewer systems for those homes to reduce the level of nutrients from sewage that leaks into the lake, Butler said the project is costly, the organization does not have adequate funding for it and the payoff would be relatively small.

“We would just be serving a few hundred people, so per sewer connection, it’s a very expensive project,” he said. “This is a rural area, so it’s not as if we’d have a huge number of homes that would be serviced.”

Another issue facing the lake that the CLA is trying to address is sedimentation. As runoff flows through lawns, picking up nutrients from fertilizers before entering the lake, it also picks up sediments that end up at the bottom of the lake.

Because the lake is unusually shallow considering its large length — its greatest depth is only about 78 feet, Butler said — it is especially vulnerable to sedimentation, or the process in which sediments fill in a body of water.

“The biggest problem I see in the future is that the amount of runoff entering the lake will eventually fill it in, but we have a ways to go before that happens,” Emhardt said.

For that reason, better sediment control around the lake is crucial. Butler cited construction work on highways as a major contributor to the sedimentation.

In addition to its regular operations, this season the CLA is cataloguing the native and non-native species in the lake. In particular, Conroe said they are looking at native mussel populations because they are indicators of good water quality. They are then using that information to better understand the behavior of several non-native mussels in the lake, specifically zebra mussels and quagga mussels, which are considered invasive species.

Butler said the CLA and those who live along the lake are also beginning to cope with the impacts of climate change. He believes warmer temperatures have facilitated the recent increase in algal blooms over the last few summers.

“The higher temperatures are giving us warmer water earlier in the season, and the water is warmer for longer periods of time than it was historically,” he said.

Ultimately, Butler believes the lake will be around for a while, especially if homeowners take measures to limit their runoff and if groups such as the CLA continue to remove excess seaweed.