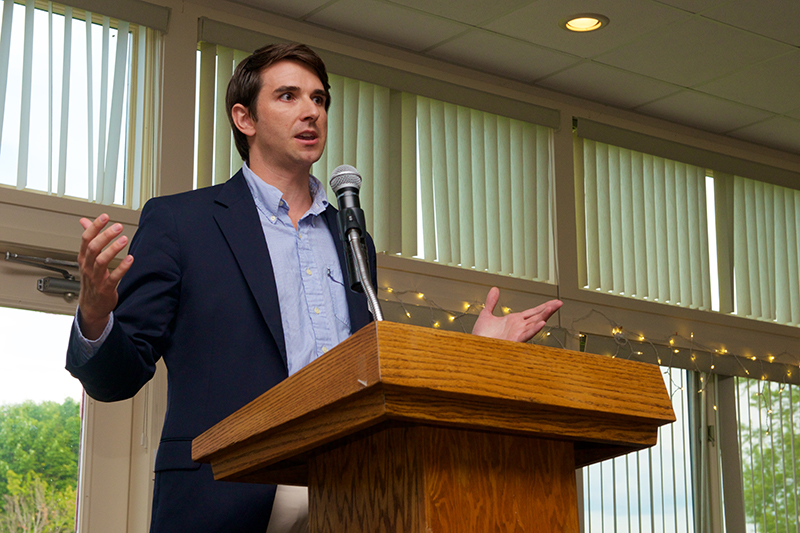 JOSHUA BOUCHER | Staff Photographer
John Haskell, chairman of the NOW Generation Advisory Council, presents his vision for engaging people between the ages of 21 and 40 at Chautauqua Institution. The NOW Gen gathered last Friday at the Chautauqua Golf Club for its annual President’s Reception.

For the first time since their organization’s inception two years ago, all eight members of the NOW Generation’s Advisory Council gathered under the same roof.

To usher in the start of a new season, NOW Gen hosted the President’s Reception at the Chautauqua Golf Club last Friday. It served both as a reunion for members and as an opportunity to discuss the organization’s goals and accomplishments.

The NOW Gen invites Chautauquans ages 21 to 40 to connect. It offers social, networking and volunteer activities, and seeks to foster leadership opportunities for young Chautauquans.

Councilwoman Kelsey Twist Schroeder spoke first, discussing a number of initiatives within the organization that would introduce more people to Chautauqua and keep “NOW Geners” in touch in the off-season. This past year, the group hosted events in New York City, Chicago, Pittsburgh and Washington, D.C., with the help of NOW Gen volunteers serving as regional captains in those cities.

Council members Mhoire Murphy and Russell Bermel then spoke about the future events NOW Gen has planned for this summer. A gallery reception is slated for Friday with special guest Rossen Milanov, the new conductor and music director of the Chautauqua Symphony Orchestra. A special NOW discount night for the opera is July 31. The day after, NOW Gen will host the second annual Summerfest at the Youth Activities Center following the Old First Night Run.

Cooke said her focus related more to the family side of the organization.

Some volunteer-led events sponsored by the NOW Gen include a Wednesday morning Story Time/Activity Hour in Miller Park during the first three weeks of the season and Tuesday afternoon play dates beginning Week Four.

Ben Sorensen, vice chair of the council, spoke to the future of NOW Gen at Chautauqua.

“When we’ve been talking with the administration and [Chautauqua President] Tom [Becker], and the board of trustees we told them we want to be more than just recipients of hearing about where Chautauqua’s going, but we actually want to be involved — participative in it and shaping it — and we are given that chance,” he said.

Council Chairman John Haskell said membership in the Lewis Miller Circle, a new group that recognizes members of the NOW Gen who have contributed $250 or more to the Chautauqua Fund, is growing.

Though Haskell said he understands the younger generation might not be in a position to give much, he underscored the participation as another form of important engagement.

“There are many other ways to [give] back,” Haskell said.

Megan Sorenson, the organization’s staff liaison, has worked with the NOW Gen over the past four years. She expressed her excitement with how the group “has really stepped up and is becoming more actively involved in a lot of different ways. The council itself … is creating a valuable channel for the thoughts and ideas of this generation to impact Chautauqua’s future.”

Becker delivered closing remarks to the members, reminding them of the importance of building the best memories at the earliest age to preserve the legacy of Chautauqua.

The Institution, Becker said, gives stability in a world that constantly changes.

“The importance of our having a deep understanding of who we are and how we relate to that changing world is critical,” Becker said.