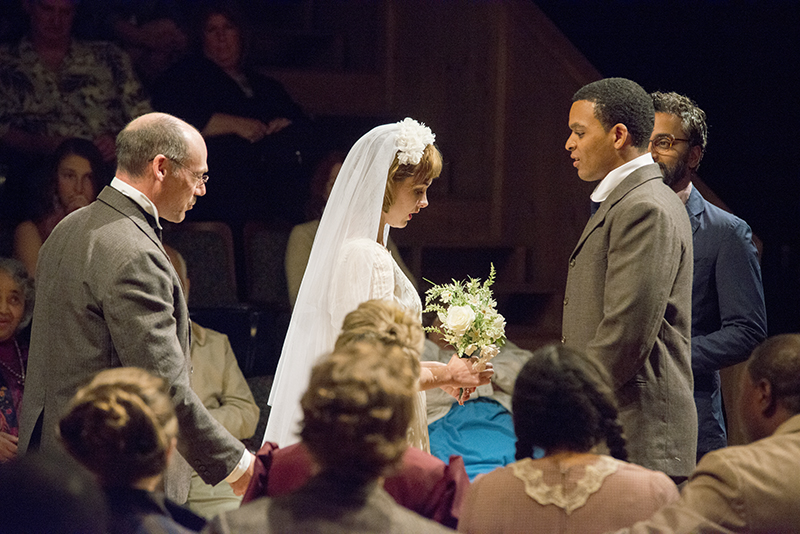 JOSHUA BOUCHER Staff Photographer
Mr. Webb, played by Andrew Borba, gives away his daughter Emily to George as the Stage Manager officiates their wedding. Chautauqua Theater Company’s Our Town runs through Sunday in Bratton Theater, including one show at 8 p.m. tonight.

If there is a more quintessentially American experience than watching Thornton Wilder’s Our Town on the Fourth of July, I don’t know what it might be. I was privileged to have that experience on Saturday at the opening of Chautauqua Theater Company’s lively and likable production of Wilder’s 1938 drama.

I’d forgotten what a good play it is. I recalled something folksy and nostalgic, but Our Town is also well constructed, imaginative and fast-paced. It is a sentimental and even romantic look back at America’s small-town past, of course, when milk was delivered by horse cart, doctors made house calls and 25 cents was plenty of weekly allowance for a teenager. It is very funny, and then moving, and has dark tones and serious messages about love, family and responsibility.

The play is set in Grover’s Corners, New Hampshire, beginning in 1901 and taking us to 1913, though it moves back and forth through time, and even offers occasional glimpses into the future. We first meet the Stage Manager (Manu Narayan), who sets the scene and introduces the main characters. It’s the first thing in the morning of May 7, and Dr. Gibbs (Michael Potts) is returning from delivering twins in Polish Town. Meanwhile, Mrs. Gibbs (Carol Halstead) and Mrs. Webb (Sheila Tousey) are getting their kids up and ready for school, lighting the kitchen stoves and preparing breakfast.

This is where we first see George Gibbs (Myles Bullock) and Emily Webb (Audrey Corsa), whose friendship, courtship and marriage form the main storyline of the first two acts, all of it overseen by the Stage Manager, who takes on several minor roles as well. He also halts the action early on to introduce two lecturers, experts on the town and its people. The first, “Professor Willard of our State University” (Jack Berenholtz), delivers a hilarious, jargon-laden description of the town’s geology and anthropology, and Mr. Webb (Andrew Borba), editor of the Grover’s Corners Sentinel, gives us a “political and social report.”

It was a good decision on the part of set designer Lee Savage — and, presumably, Director Paul Mullins — to reconfigure the Bratton Theater for Our Town, placing seats on both sides of the stage and presenting the work more or less in the round. Wilder wanted to eliminate the “fourth wall,” that invisible theoretical boundary between the stage and the audience. To that end, he has the Stage Manager, and occasionally other characters, address the audience directly, making the work warmer and more intimate. As well, actors in the audience ask Mr. Webb questions of their own. (“Is there much drinking in Grover’s Corners?”) In answer to one of these, about social and economic justice, Mr. Webb has perhaps my favorite line in the play: “I guess we’re all hunting like everybody else for a way the diligent and sensible can rise to the top and the lazy and quarrelsome can sink to the bottom. But it ain’t easy to find.” By placing the stage in the midst of the audience, as it were, the CTC production perfectly complements Wilder’s intentions.

So that was a big decision. But really, there aren’t a lot of decisions for a set designer in Our Town, at least if you’re following Wilder’s directions, which Mullins mostly does. The stage is practically bare: a couple of tables, a few chairs. Almost all of the props — silverware, chicken feed, chickens, firewood, the Sentinels delivered by the paperboy — are mimed by the actors. It is a credit to the skill of the performers that this never becomes distracting, or even noticeable. Andrea Hood’s nicely turned out period costumes no doubt help, as does Seth Reiser’s subtle, evocative lighting. But when Howie Newsome (Jonathan Majors) convincingly delivers invisible milk with an invisible horse and wagon, aided only by the faintest clinking of bottles from the Stage Manager, you have to give a lot of credit to the performer.

Indeed, the entire cast does fine work. Manu Narayan’s Stage Manager is more exuberant than homespun, where the role is usually pitched, but he has a big personality and delivers the part with style. The four parents — all veteran character actors — give strong, intelligent performances, by turns humorous and touching. As the young lovers, Bullock and Corsa are engaging and credible, with considerable stage chemistry. The scene in which George and Emily realize — or finally admit — that they are made for each other is priceless, a perfect blend of shyness, longing and determination.

At the beginning of Act II, the Stage Manager tells the audience: “The First Act was called the Daily Life. This act is called Love and Marriage. There’s another act coming after this: I reckon you can guess what that’s about.”

I reckon we can. Act III, which takes place in 1913, opens in the Grover’s Corners graveyard, and this is the day of Emily’s funeral. She died in childbirth, and is joining her mother-in-law in the cemetery; Mrs. Gibbs died of pneumonia three years before, while visiting her daughter in Ohio.

Act III is heartbreaking, yet somehow uplifting. Emily’s death and George’s grief are reasons enough to be sad. But Emily, who is new to death, chooses to return to her past despite the best advice of Mrs. Gibbs and the other dead characters. Like the Ghost of Christmases Past escorting Scrooge, the Stage Manager takes Emily back to the day of her 12th birthday. Her father is just back from a trip, with a secret present. Her mother wants her to sit down eat her breakfast even though she’s excited. Watching the scene, and knowing how the future will unfold, Emily is stricken with sorrow. She returns to her grave, reconciled to death.

Yes, of course it’s a sad ending. But in the context of the entire play, after the exuberance of childhood, the satisfaction of success and the joy of love, when all is said and done, Our Town is optimistic about humans and humanity, and about America.

Jack Kirchhoff is an arts writer and editor —­ and an American ­— living in Toronto.