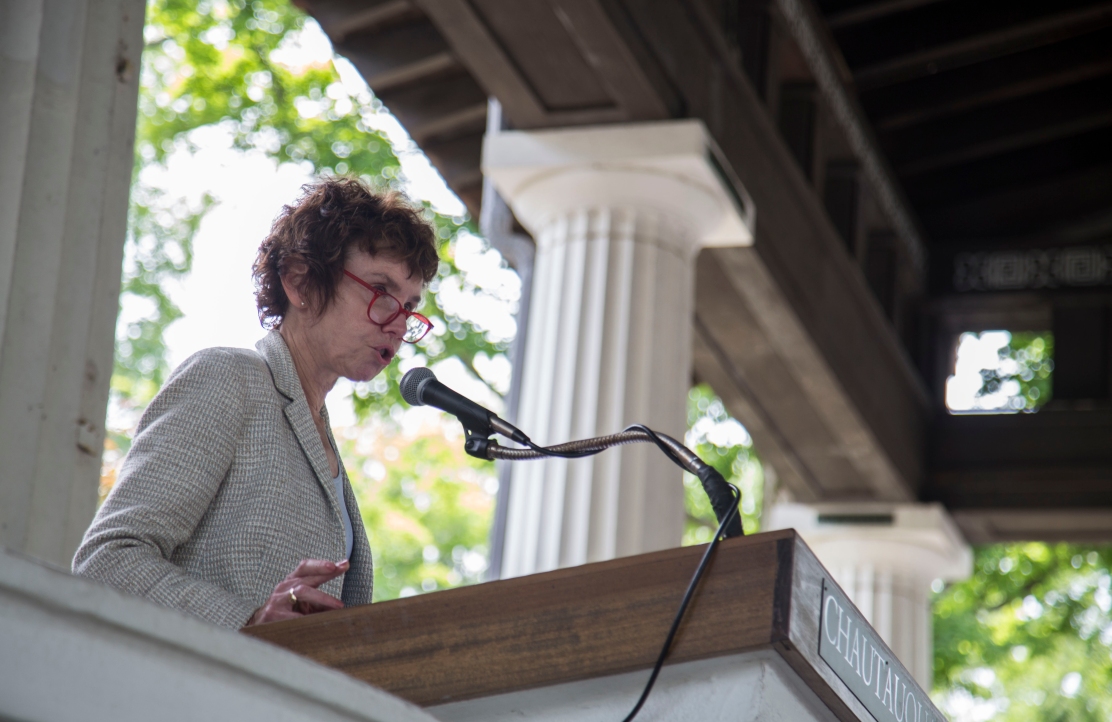 BRIA GRANVILLE | Staff Photographer
Meryl Justin Chertoff, Executive Director of Justice and Society at the Aspen Institute, delivers the Interfaith Lecture on Monday in the Hall of Philosophy. Chertoff spoke about the need for interfaith literacy and the need for multifaith engagement.

Sometimes, the most painful conversations are the ones needed most, and according to Meryl Chertoff, America is long overdue to discuss its religions and how they coexist.

Chertoff, director of the Aspen Institute’s Justice
and Society Program, delivered the first Interfaith Lecture of the 2015 season 2 p.m. Monday in the Hall of Philosophy. She spoke about “Interfaith 2.0” and the religious literacy it requires, and she shared her findings from the “Principled Pluralism” project, which she co-authored.

“There are few more difficult conversations today than the one over religious literacy,” Chertoff said. “Whether we navigate it successfully or whether we are polarized by it will determine whether we remain faithful to one of our country’s most cherished traditions.”

Chertoff said Interfaith 1.0 was a school of thought on interfaith harmony that worked well while it matched America’s demographics circa the 1920s, but needs to be rebooted to match contemporary figures, ideologies and pluralistic principles.

“Interfaith 1.0 was a conversation between the like-minded,” Chertoff said. “It made many contributions, but within some measure, it was an echo chamber. In the 21st century, a multifaith and multicultural interfaith 2.0 has emerged from the nation’s shifting demographics. Interfaith 2.0 faces challenges of bridging that are way more complex than what preceded it. But at its best it’s a robust conversation.”

Citing some of her findings, Chertoff pointed to a Pew Survey that shows the number of Americans that do not identify with any religion — “nones” — are skyrocketing in population, as is the country’s Muslim population, while former majorities, such as Protestants, are decreasing in number.

In addition to the changing demographics, Chertoff said Americans today have a limited understanding of other religions, and likewise have poor perceptions of members of religions different than their own.

If America is to embrace Interfaith 2.0, Chertoff said, its citizens will need to foster better understandings of one another.

“You know that little phrase, ‘Agree to disagree’?” Chertoff said. “When it comes to religious pluralism, that’s a powerful phrase.”

Despite America’s need for a change, Chertoff still spoke for the hope of pluralism and the history behind it. More specifically, she cited the country’s national identification system and its merits.

“If you are born here or if you’re nationalized, your passport and driver’s license are the same, whether you are fifth generation or first generation,” Chertoff said. “That is a great strength, but we have to earn it with each succeeding generation. It is not an inheritance.”

To move forward as a country, Chertoff said people need to take small steps within their community to build understandings. Among them, she suggested that congregations “twin” with a different faith and join one another in worship, or even share a meal, beer or soft drink with one another to start building the bridge.

Chertoff discussed the recent shooting in Charleston, South Carolina, and its aftermath. She said despite the hate, wrath and ignorance behind the violence, the best side of humanity emerged when the community came together to forgive the alleged murderer despite the heinous nature of his crime.

She said the way forward from such a tragedy is further embracing and supporting one another’s faiths.

In closing, Chertoff urged coming together and finding common ground as opposed to clinging to the things that make people different.

“The transforming joy comes when you do agree, not necessarily on matters faith, but on matters of charity, service and social commitment,” Chertoff said. “And that is our aspiration about principled pluralism.”