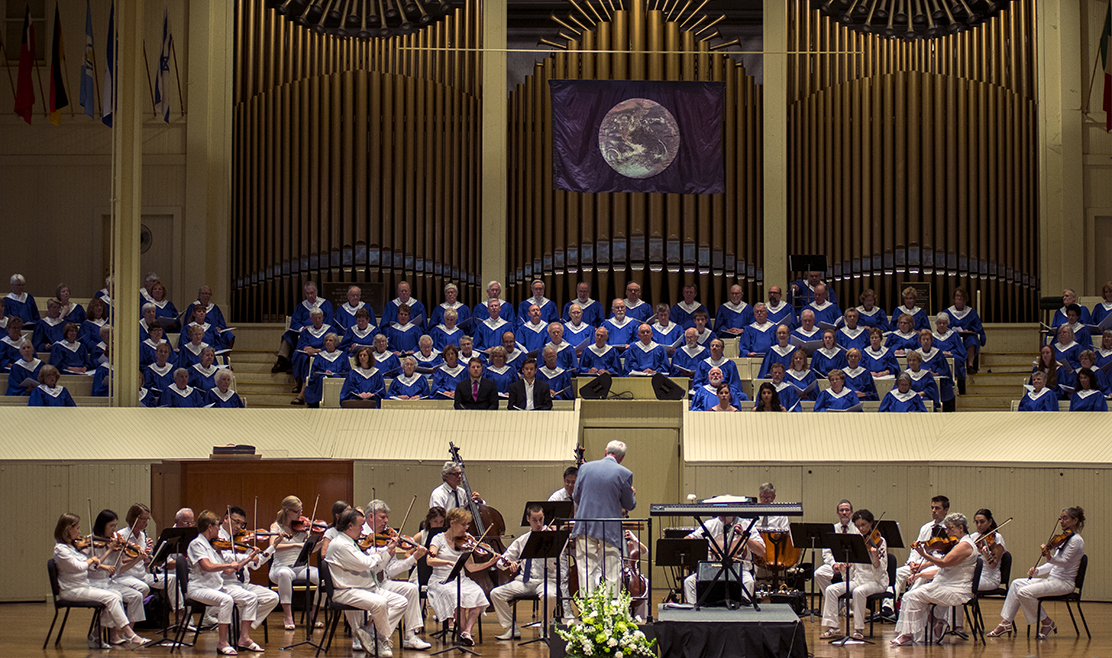 NAME | File Photo
Institution organist and coordinator of worship and sacred music Jared Jacobson leads the Chautauqua Choir and members of the Chautauqua Symphony Orchestra during the July 20, 2014, Sacred Song Service in the Amphitheater.

By all accounts, the first Sacred Song Service of each season should be a disaster.

“Everything about the system shouldn’t work, but there is a magic at Chautauqua that has been happening for generations,” said Jared Jacobsen, director of the 150-voice Chautauqua Choir. “Don’t ask me how it works, I just know it works because the chemistry is there.”

The choir is an Institution staple, Jacobsen said, but he classifies it as a “pickup choir,” with constantly changing membership and only two rehearsals before the initial performance. By the end of the season, nearly 600 singers will have performed with the group.

Jacobsen and his choir will showcase their musical chemistry at this week’s Sacred Song Service, which will take place at 8 p.m. Sunday in the Amphitheater.

The service is titled “Let Everything that Hath Breath,” a nod to the choral anthem by Jeffery Ames that will be performed during the service.

Jacobsen has worked with Ames in workshops for the Bishop’s School choir, which he directs in La Jolla, California.

He hopes to eventually bring the composer to Chautauqua.

“My gut feeling is that Jeffery and Chautauqua will be a happy match,” Jacobsen said.

Guest saxophonist George Wolfe will accompany the group on Howard Helvey’s arrangement of “Jesus Loves Me.” Jacobsen noted that this arrangement is particularly relevant to Chautauqua because Helvey studied piano at the Institution.

In addition to the Helvey piece, Wolfe will join the choir for an arrangement of the spiritual “Steal Away to Jesus.” He also plans to perform a saxophone solo by Argentine composer Astor Piazzolla.

Drums, shakers and other percussion instruments will add further musical diversity to the performance.

“I love to kind of exploit the sonic aspects of the Amp,” Jacobsen said.

Rounding out the setlist are Charles Tindley’s arrangement of “The Storm is Passing Over,” and “Let the River Run” by Carly Simon. Though “Let the River Run” is most closely associated with the film Working Girl, Jacobsen feels that the lyrics are “very appropriate” for Chautauqua.

Perennial favorites, such as “Day is Dying in the West,” and “Now the Day is Over” will open and close the vocal portion of the service. Jacobsen’s rendition of George Frideric Handel’s “Largo” from Xerxes will bring it to an official close.

“It’s the closest thing we have to a sacred relic,” Jacobsen said of the “Largo,” “[Chautauqua organists’] careers have         been made and broken based on how they play ‘Largo.’ ”

Jacobsen will also offer his traditional litany prayer. This litany lays out both the past and the coming seasons to “introduce and reintroduce” Chautauquans to the Institution.