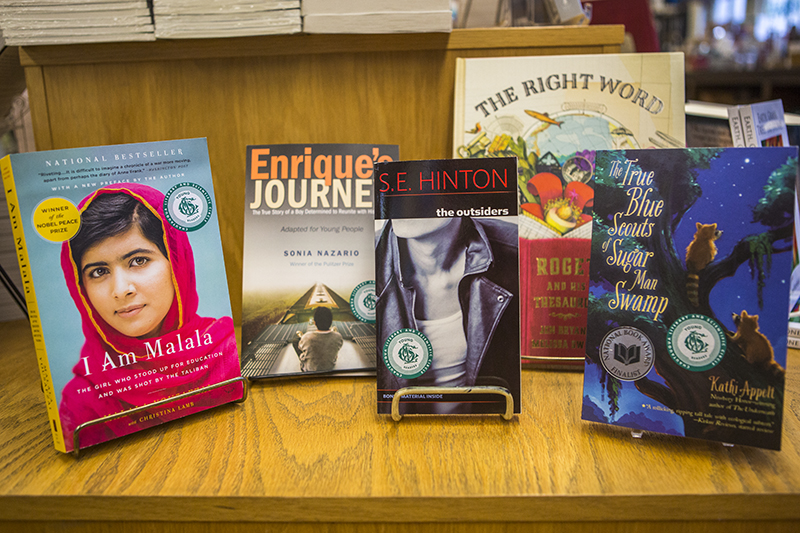 RUBY WALLAU | Staff Photographer
A selection of books chosen for the 2015 Chautauqua Literary and Scientific Circle Young Readers program are on display at the Chautauqua Bookstore.

“I certainly think we’re in a cultural movement where young adult literature is thriving, and I think it has a real respect for readers of all ages,” said Matt Ewalt, associate director of Education and Youth Services.

Ewalt compiled the 2015 selection of works for the CLSC Young Readers program with the help of department colleagues. The program aims to inspire discussion and literary analysis in children aged 9–14, and meets at various locations at 4:15 p.m. each Wednesday of the season. The program has no fee or sign-up requirement, and although parents are welcome, it is primarily designed to engage children.

Participants are encouraged to have read the book before each week’s program, but it is not required. For about 10 to 15 minutes there will be a book discussion, followed by an activity that reinforces the book’s themes and central ideas.

The summer kicks off with Jen Bryant’s The Right Word: Roget and His Thesaurus, with illustrations by Melissa Sweet. The biography-turned-children’s-book fits in with Week One’s theme, “21st-Century Literacies.”

Week Six’s selection — The True Blue Scouts of Sugar Man Swamp by Kathi Appelt — is a telling of two raccoons’ journey to protect their swamp from humans who want to turn their home into a theme park, and it falls into the theme of “Vanishing.” The ideas of conservation and environmentalism are reinforced not only by the discussion but also by the wetlands exhibit that will follow, Ewalt said.

“Triggering that process of literary analysis in their minds and also challenging the books [they’re reading] is important,” he said.

Other titles include S.E. Hinton’s The Outsiders and The Crossover by Kwame Alexander in Week Two, Sonia Nazario’s Enrique’s Journey in Week Three, and I am Malala by Malala Yousafzai in Week Eight.

Although getting children to read during their summer vacations would seem impossible, Ewalt said that isn’t the hardest part.

“Because of the moment we’re in with such exciting literature published year after year, the difficulty is in choosing only one,” Ewalt said. “For most who will participate in the program, they are already active readers.”

“What I would love would be for our Young Readers program to be welcoming to kids from all over the county,” Ewalt said. “As with anything involving community outreach, it’s not only getting the word out, but demonstrating this isn’t just a gesture but rather our firmly believing that kids from the county will make the program better.”