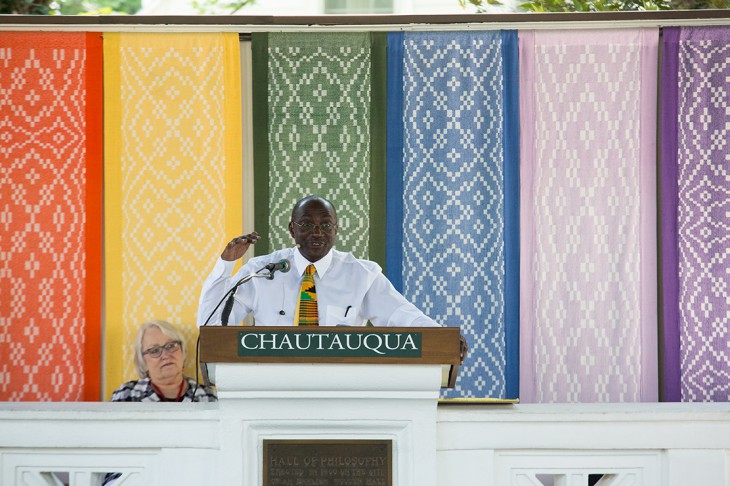 Exploring the traditions, cultures and religions of others has given Emmanuel Lartey a deeper understanding of his own.

The Ghana native and L. Bevel Jones III Professor of Pastoral Theology, Care, and Counseling at Candler School of Theology at Emory University focused on African religious traditions and their relationship with death during his 2 p.m. Interfaith Lecture Tuesday in the Hall of Philosophy. The lecture, titled “Death is Like Birth: Death and Life in African Religious Traditions,” followed Week Nine’s theme, “From Here to Hereafter: Facing Death with Hope and Courage.”

Lartey said he spoke with many healers, herbalists and “fetish priests” across the African continent to capture the essence of the various African religions, of which there are many. Through his research, he discovered themes that were distinctly African — even “in the mix of complex variety.”

In Western culture, the common belief is that death is the opposite of life. That’s not true in African culture, Lartey said.

Death is more like a doorway in African culture, he said. Its opposite is birth — both are passageways to and from the physical world, as the spirit transcends to somewhere greater.

Since death is seen as a gateway to another, spiritual realm, Lartey said it’s a common African belief that the dead never really leave, and are still present in family life. In fact, the well-being and success of the family depend on the dead doing their part, as well as the living. Their job is to protect and guide their family members and act as elders.

“[Death] does not sever their connections with family, rather it extends the family’s relationships into infinity and eternity,” he said. “The African family as such has a spiritual quality to it because it is made up both of the living and the dead.”

Death is also a journey. Lartey said Africans describe death as though it’s a trip. People are “going” somewhere or “returning home.” In Uganda, people might say they were “told by Death to pack up their load and go.”

He used the Ghanaian tradition as an example and quoted Anthony Ephirim-Donkor, a professor specializing in African studies: “The elders, particularly kings and queen mothers, never die but merely travel to other villages.”

This journey takes on important meaning during funeral ceremonies. Lartey said it is believed that the soul goes on a nine-day journey to a spiritual place geographically located west of Ghana. The soul must pass through a dangerous wilderness and then cross the River of Death — but not without paying a fee to either canoe or be ferried across.

“Several African groups engage the practice of providing money or other essentials, at times placing these in the casket or in the coffin, in order for the departed to pay their fare across the river,” Lartey said.

It is also believed that the smoothness of the soul’s journey depends on how the person lived his or her life. If they were moral and kind, the journey would be easy, he said. If they were not, they might face rough waters, fall out of the canoe and have to swim for years to reach to other side.

The funerals themselves are also very important in the Ghanaian tradition. The family will act out the rowing of the canoe across the River of Death as a way to help and encourage the journey of the deceased’s soul, Lartey said.

He also said people are buried in elaborate caskets, decorated with family crests or in the shape of family totems. They represent the status of the person inside.

“My own maternal and paternal people have perfected the craft of burying the dead in elaborate, artfully constructed caskets that are customized to exemplify the deceased’s personality,” he said.

Caskets in the shape of elephants — or even Coca-Cola bottles — are not unlikely.

In other traditions, Lartey said people are buried naked and funerals are private events with only close family.

These burial traditions are important to ensure that the deceased will be well received on the other side of his or her journey. Lartey said it follows the common African belief that “every human being has a place to go” after death.

It’s a common African tradition to bury people in the place where they were born, he said.

“The burial is in the place where the umbilical cord was buried — so there is this connection between birth and death,” Lartey said.

Death is also similar to birth because this spiritual place where the souls travel is nurturing and powerful — much like the womb, Lartey said.

Finally, Lartey brought up the concept of grief in African cultures, which is thought of as a positive, healing process for both the living and the dead.

“Grief is actually owed to the dead as one of the things that can help complete the death process,” he said. “Grief delivers to the dead that which they need to travel to the realms of the dead — a release of emotional energy that provides a sense of completion, or endedness or closure.”