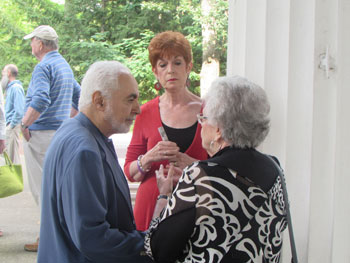 Eighth Century. Córdoba, Spain: At the time, the country was under Islamic rule, and cities like Córdoba absorbed the language, beliefs and religion of the Islamic people. Córdoba, now a World Heritage Site, was unique in the sense that there was unification between the three Abrahamic religions: Judaism, Christianity and Islam — a notion of “shared worship” that, as evidenced in contemporary media, has increasingly diminished.

Despite these tensions, Feisal Abdul Rauf, an American Sufi imam and author, has held fast to this concept of Abrahamic harmony and brought it to the United States, where he translated it into a multi-faith, multi-national organization called the Cordoba Initiative.

It’s a program, Rauf said, with the aim to “bring harmony between America and the world of Islam,” while focusing on the aspect of religious tension.

The imam believes that much can be accomplished by building Muslim-American community centers around the world — that is, in the form of what he calls a “Cordoba House.”

“The purpose of the Cordoba House is to … have an impact — or a presence, actually — on how people think about you and [how] people want to engage with you,” Rauf said.

It is place where, Rauf said, “people — not just Muslims — can sing together, eat together, pray together,” one that welcomes all members of the Abrahamic family of religions.

What better place to start than Chautauqua Institution?

Ever since 1995, the Department of Religion at Chautauqua has worked to create bonds between Islam and other faiths. Due to the overwhelming success of the Soviet Exchange Program in the 1980s, where 250 Chautauquans were sent to Soviet Russia in a cultural exchange to explore U.S.-Soviet affairs, former Chautauqua president Dan Bratton formed the Middle East Task Force with a similar dream that he had regarding the people of Islam. As U.S. military presence in Afghanistan increased, however, Bratton decided such a task was too dangerous.

One member of that task force was Maureen Rovegno, now associate director of the Department of Religion, who remembers the ’90s as being a time when awareness of the Islamic world was sparse, as “most people had no clue” that the faith was a part of the Abrahamic family. In 1998, Rovegno, then a member of the Chautauqua board of trustees, aided the Rev. Ross Mackenzie, director of the Department of Religion, in forming the Abrahamic Initiative in 1998 to bolster this awareness, to accommodate the Muslim faith on the grounds and respond to the already pressing curiosity of many Chautauquans.

Then 9/11 hit. Islamophobia went off the charts.

At the same time the Department of Religion, under the direction of the Rev. Joan Brown Campbell, morphed the Abrahamic Initiative into a new Abrahamic Program — which would eventually spawn the Abrahamic Program for Young Adults — Rauf was spreading the word about his initiative. Rauf experienced tremendous backlash when the press caught wind of the “mosque” he wanted to build near Ground Zero. The media, he said, blew it out of proportion. Rauf tried the best he could to remind the world that the terrorist attacks were “un-Islamic” and as antithetical to the Muslim faith as could be.

With ISIS forces running rampant in Iraq, and Salafist jihadists following a radical form of Islam, Rauf said that there’s no better way to combat this sense of extremism than to “educate persons who do not know enough about their faith traditions … and other peoples’ faith traditions.”

Rovegno said that she sees Rauf’s goal as one that weaves the same fundamental thread of Chautauqua’s religious creed.

“This is how Chautauqua will truly become the family of Abraham — by meeting people, becoming friends, extending hospitality, accepting hospitality,” Rovegno said. 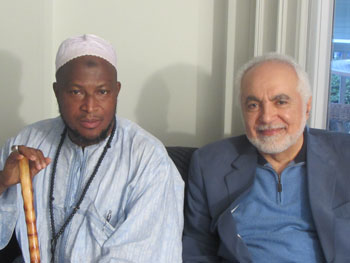 Provided photo
Imam Souleimane Konate of the Aqsa Salaam Community in Harlem with Rauf; Chautauquans gathered for the series of Muslim Devotional Hours during Week Eight in the Hall of Philosophy

If the initiative fulfills its task, Rovegno said, then “large numbers of folks that come to Chautauqua can say, ‘I can’t be Islamophobic because I have an Islamic friend.’ ”

Rauf, who has been coming to the Institution since 2002, said that he has been influenced greatly by Chautauqua’s religious tolerance in the past. Throughout Week Eight, Rauf led a Muslim devotional hour, demonstrating similarities among the Abrahamic faiths, attempting to rectify misconceptions some have about Islam, and voicing like-sounding words of sacredness.

Rauf ended each session with Muslim prayer, where Jews, Christians and Muslims chanted as one.

Halfway through the week, the leaders of the denominational houses throughout Chautauqua held an open house for Rauf and members of the Cordoba Initiative. A room packed with curious Chautauquans eager to hear Rauf’s proposal was “heartwarming” due to the surprising amount of encouragement.

“It was a very powerful event,” he said. “Everyone welcomed us with open arms.”

After Rauf delivered a speech to the chaplains, hosts and chairs of the houses, Kurt Akeley, host at the Mayflower House (a part of the United Church of Christ at Chautauqua), went in front of the podium to deliver what Rauf said was “one of the most powerful statements of all” that evening.

“We need a Cordoba House here in Chautauqua more than you need the Chautauqua Institution,” Akeley said.

And other leaders agreed.

Bob Douds, the chair of the United Methodist House, said that the Cordoba Initiative is “one of the perfect groups” to carry out the original plan of the Abrahamic Initiative. He said what will benefit all religions at Chautauqua is what the people here love most: “to seek out knowledge.”

“The truth is that ignorance creates fear, and this knowledge will eliminate fear — that [fear] which is the seed of all this,” Douds said.

Edith Everett, immediate past chair of the board of the Everett Jewish Life Center at Chautauqua, said that “we are entirely supportive of any Muslim house, center or initiative at Chautauqua that would encourage greater participation of the community.”

Deacon Ray Defendorf, host of the Catholic House, said that “there’s a lot of support” for Rauf and the Cordoba House at Chautauqua, and that all denominational houses “would be open to having a Muslim community” at the Institution.

And Akeley himself stated that he’s “always been impressed about the interest in Muslim inclusion” and the “possibility of this kind of unity” that could occur. Akeley said that, at the open house, denominational representatives were practically cheering for Rauf’s proposal and what it stood for.

“There were all these offers for space to host [Cordoba] in the meantime,” he said. “Almost everyone was jumping forward saying, ‘Don’t forget me! Don’t forget about me!”

Recalling the reception he got, Rauf said he thinks that a future Cordoba House in Chautauqua can act as a “laboratory-scale model” or “pilot project,” where he can “test [his] ideas and refine them to start the ‘franchise.’ ”

Because Chautauqua, to Rauf, represents “not only the members” of many faith traditions “but their leaders,” he said that the religious harmony in Chautauqua’s 140-year long tradition underlies the philosophy embedded in his “mission statement.”

Until the Cordoba House is actually constructed in the Institution, Rauf said that he is thinking in the meantime about a “house without walls,” and rather focusing on a Christ-like spreading of a “gospel of peace” with those he engages with around the world.

The aim first, Rauf said, is to focus on the “foundation.”

Rovegno is still concerned about the residual fear and even “terror” some Americans have for Islam. This, she said, is why the initiative is needed.

“The only way that this fear can be alleviated, or neutralized, is to get to know each other in a personal way,” she said.

As the Psalm goes: “How good is it, and how pleasant, when people dwell together in unity.”