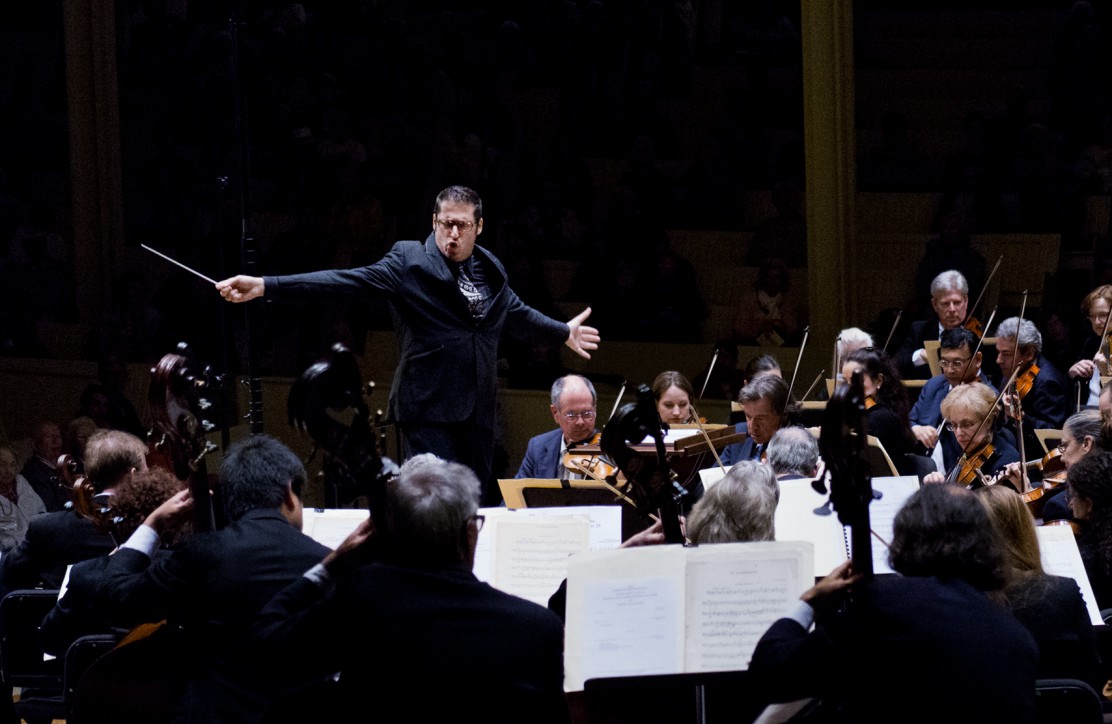 Online employment sites often suggest that last impressions make the best impressions, at least for job seekers who are last in a series of interviews for an open position.

If that is true, the Israeli-American conductor Daniel Boico has an inside track among the field of eight vying to grab the Chautauqua Symphony Orchestra’s vacant music director position.

But in order for the last-is-best formula to work, the aspiring candidate needs an orchestra at the top of its game.

For the first half of Saturday evening’s program, the Chautauqua Symphony was not that orchestra. It’s easy to see why. At the end of a long and demanding season, travel plans, homesickness and the contemplation of a similarly long season with home orchestras all tug at the attentions of even the most dedicated and professional of musicians. They are, after all, human beings, too.

That might explain the muzzy impression made by Liszt’s “Les Préludes,” which opened the program. Boico’s hushed, poetic introduction seemed to promise a search for something novel in this once-ubiquitous music. Untidy entrances and earthbound execution suggested that the CSO wasn’t up for the adventure. Or maybe the music itself wasn’t up for it. Some critics can’t decide if Liszt is the world’s worst great composer or the world’s greatest composer of bad music.

On Saturday, the question answered itself.

It may be heresy to suggest that Gershwin’s “Rhapsody in Blue,” too, is not great music. It’s unquestionably an important piece of music, and one that holds a rightful place in the affections even of Americans who care little for concert music. Still, the “Rhapsody” barely made the deadline of its 1924 premiere, and there are passages where one can hear the brilliant young composer spinning notes to fill the page. It’s the kind of piece that depends for its success on what rappers refer to as “flow.”

Chautauqua favorite Alexander Gavrylyuk chose “Rhapsody” to celebrate the work’s 90th anniversary. This performance of the work was Gavrylyuk’s first in the U.S., an occasion that he admitted held some significance for him. On a smaller scale, personally and geopolitically, it was a bit like Van Cliburn’s headline-making Tchaikovsky Piano Concerto No. 1 in the Soviet Union in 1958, a performance that launched a career. Gavrylyuk, of course, is well established, and nowhere more so than Chautauqua, where he has been a crowd favorite since 2006.

The “Rhapsody” is a crowd-pleaser, too, and it certainly was on Saturday, but it got off to a rocky start when the treacherous clarinet smear that opens the piece was cracked, perhaps an omen of the coordination problems that interrupted the flow of a piece that essentially milks two themes for 16 minutes. In between are some Rachmaninovian passages of piano razzle-dazzle, and Gavrylyuk pounced on them, but this “Rhapsody” never really found its feet, even if the near-capacity crowd did for a riotous ovation at its end.

Facing an unfamiliar piece on the second half of the program, Boico had some work to do.  He needed a winner and he got one.

Vasily Kalinnikov’s Symphony No. 1 in G minor is not great music, but it can be great fun when it is given a performance that is long on conviction and short on condescension. From the opening statement by unison strings of Kalinnikov’s folkloric melody, the CSO played with admirable commitment and a rhythmic lift that was absent before intermission.

Boico judged his tempos expertly, and he didn’t fuss with them. He kept textures clear, the better to reveal the felicitous inner-voice embroidery that the doomed Russian composer (he died two days short of his 35th birthday) sprinkled throughout this beguiling score. The audience responded with scattered applause at the end of the first movement, and it was well earned.

Fans of Tchaikovsky’s first three symphonies would smile in recognition of Kalinnikov’s snow-globe of a second movement. Boico took it slowly, winter nachtmusik, with largely solid work from solo oboe and cor anglais in their sad songs.

In the rustic dance of a scherzo, Boico navigated between the extremes of plodding on the one hand and frenzied stomping on the other, and got nicely mysterious playing in the slow polka of the trio.

After a brief teaser of the unison string melody that opened the work, it was off to the races for a finale that had a strong folk-dance character. It would have been nice to hear the CSO cut loose a bit more in this romp, but how many of the players had ever seen this music before?

As it was, the final peroration, anchored by appropriately bellowing low brass, rang out like the Russians’ beloved carillons. A grateful audience, somewhat diminished from the first half, had a new piece to fall in love with, and the CSO had a music director candidate that will be well worth watching when he closes the season on Tuesday.