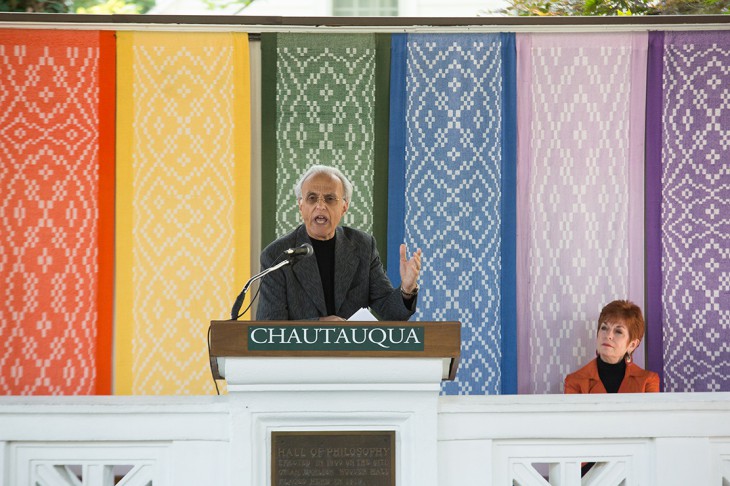 Matt Burkhartt | Staff Photographer
John Esposito, professor of religion and international affairs of Islamic studies at Georgetown University, speaks during his Interfaith Lecture Friday in the Hall of Philosophy.

John Esposito said religion has two sides: It has a transcending side, and it has a dark side.

Esposito, professor of religion and international affairs and of Islamic studies at Georgetown University, discussed these facets of a globalized and diverse religious society during his 2 p.m. Interfaith Lecture Friday in the Hall of Philosophy.

His lecture, “Islam, Globalization and the Public Square,” was the capstone on Week Eight’s theme, “The Global Religious Public Square.”

He focused on Islam to explore media and education systems. He then analyzed  those institutions’ role in shaping public perception of varying religious traditions. According to the professor, religion has become a public practice, rather than a private one.

Every religion has both sides, Esposito said. Transcendence is the belief in a reality beyond one’s own. It involves religious practices such as prayer and meditation — among others — and most believe that transcendence makes one a better person.

The dark side is full of preachers of hate and the people who act upon that hate, he said.

Examples of this dark side can be found in places such as Israel and Palestine, in India between Hindu Christians and Hindu Muslims, and in the United States and Europe, he said, where Islamophobia and anti-Semitism are increasing.

Esposito compared the religious landscape of America today with the landscape in the mid-1950s. It was a principally Judeo-Christian nation. Over the next 20 years, issues of secularism would begin to arise, and Buddhism, Hinduism, Islam and other Eastern religions became more common in the United States.

These changes weren’t reflected in major social institutions, though.

“When it comes to media, Islam and Muslims were invisible 30 years — even 20 years — ago,” Esposito said. “Schools and universities’ curriculum? No way.”

This all changed with the Iranian Revolution of 1979.

Iran, a country that President Jimmy Carter referred to as “an island of stability,” went into revolt at the same time global religious resurgence was taking place, Esposito said. Religion was thrust back into the public sphere.

“For some, it then took on the dimension of politics,” he said. “And so you then saw religion emerging in mainstream politics, but also in radical politics.”

The major turning point was 9/11. Esposito said it left America feeling vulnerable in a way it had never felt before. It had never been attacked on its own soil, with the exception of Pearl Harbor — a substantial distance from the mainland.

The positive outcome of this question was that Muslims finally got some national attention and coverage in the news, Esposito said. The only side that was covered, though, was the dark side.

In reality, Esposito said public surveys, such as the Gallup Poll, revealed that the majority of Muslims admired the United States the same way non-Muslims did. They did feel, however, that Arab blood was worth less than American blood in the government’s eyes and that there was a double standard in America’s foreign policy.

“With the fall of the Soviet Union, [America] promoted democracy everywhere else but not in the Arab and Muslim world,” he said. “We lived comfortably with authoritarian regimes because they met our practical, strategic interests even though we said we believed in self-determination and we promoted it in other parts of the world.”

Esposito said there was a popular failure after 9/11 to distinguish between a minority of Islamic terrorist groups and a majority of Muslims who were simply critical of America’s foreign policy.

One example of how issues became convoluted in the media was Park51, a proposed Islamic center in Manhattan. The site — which was not at Ground Zero — was wrongly portrayed as “building monuments to terrorism,” Esposito said.

“We saw a tsunami of anti-mosque activity occur from New York to California,” he said. “Attacks on mosques, hate crimes, hate discourse.”

According to the professor, the media were biased in their coverage of Islam and Muslims. Esposito said that, before 9/11, out of 975,000 news articles from the United States and Europe, 2 percent of those stories covered militants, while 0.1 percent covered average Islamic and Muslim people. After 9/11, the first number rose to 25 percent while coverage of average Islamic and Muslim people remained the same.

“Think about what that means for those of whom this is our outlet [to knowledge],” Esposito said.

To correct this misconception, Esposito said to look at the demographics of Muslims in the United States.

“Muslims are integrated educationally, economically … and increasingly politically and religiously,” he said.

He also said religious leaders need to implement training so that local leaders have an education in diversity and religious traditions, instead of simply signing grand proclamations.

“The top can issue a statement, but it’s the local folks who give the sermons every week who impact the community,” Esposito said.

Education is what will ultimately lead to respect and understanding, he said. Interaction with these different groups needs to be encouraged through outreach programs, with speakers and materials to help bring religiously diverse groups together.