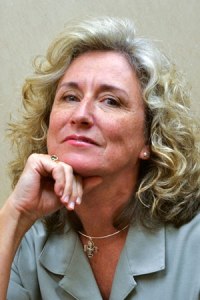 There’s nothing harder than facing death. Except, perhaps, talking about death.

Rebecca Brown, however, works to help people face that fear, and in turn make the dying experience less difficult. Brown, a thanatologist, will give a lecture at 2 p.m. today in the Hall of Philosophy titled “Dying Well in a Death-Phobic Society.”

Brown founded Streetlight, a support program in the University of Florida’s Pediatrics Department that paired pre-medical students with young people living with chronic illnesses or facing an early death. Her lecture, however, will focus more so on how death is perceived in American culture and strategies for being better prepared for death.

Week Nine’s Interfaith Lecture theme is “From Here to Hereafter: Facing Death with Hope and Courage.”

Several of Week Nine’s other Interfaith speakers will address death from various religious traditions; Brown will focus on a death-focused society and dying well within it.

Sociologist Geoffrey Gorer coined the term “the pornography of death” in the 1950s, a topic Brown will explore.

He argued that by shutting down discussion of death, it was likely to sprout in other places — a notion Brown has seen consistently in her work, whether it be in television or video games.

“His theory was that the more you repress something natural like sex or death, it is going to pop up in a horrific manner elsewhere in society,” she said. “I turned on my television and we’re cutting up cadavers. Death is everywhere, but not in a naturally integrated way in our life.”

Censorship is not the answer; rather, it is essential to bring topics such as death into one’s natural understanding of life, Brown said. Additionally, the U.S. is a youth-oriented culture in which it is difficult for people to think about even aging.

Brown has seen death in some of the most unfair situations — including 18- and 20-year-olds dying — but even in those situations, death can offer beautiful gifts that happen only at the end of life, she said. If death has been integrated into a person’s thinking and he or she has understood life as finite, that person is more likely to be the beneficiary of some of those gifts.

“I feel embarrassed because the gifts are mine — it’s not what I’m giving to them,” Brown said. “It’s what we get back, too, as far as life perspective.”