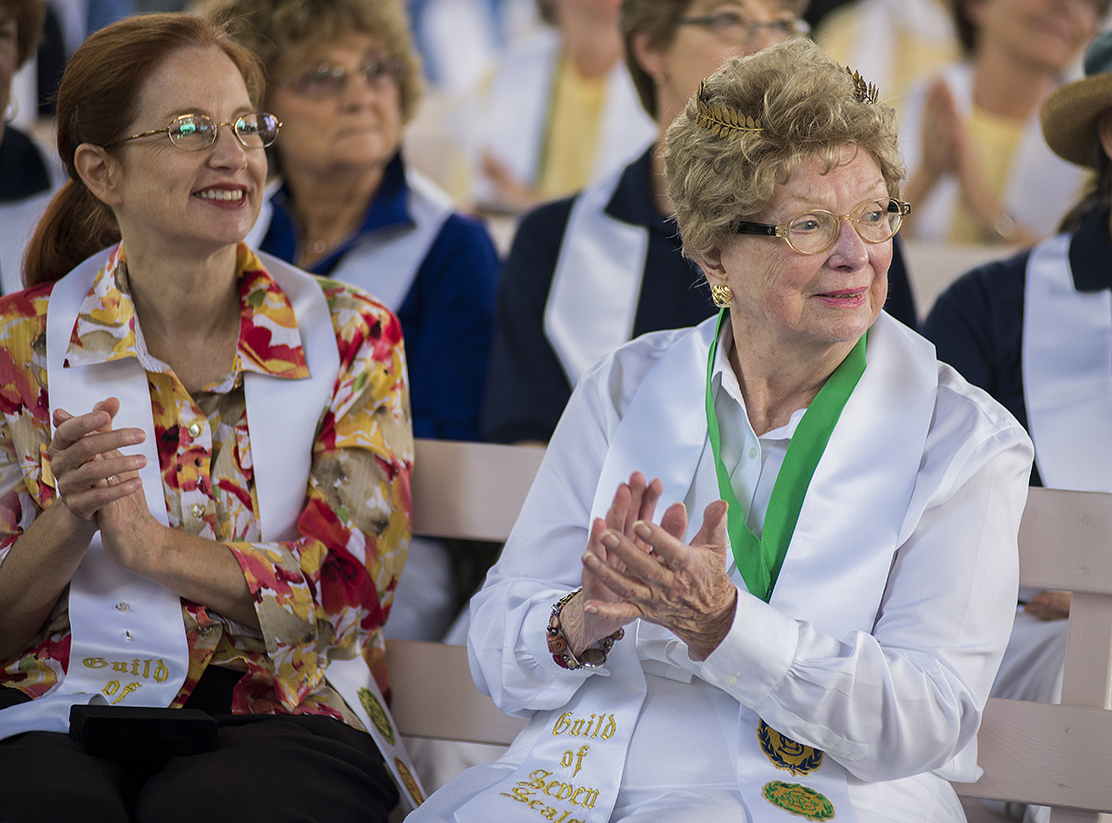 Rachael Le Goubin | Staff Photographer
Leslie Gurney sits with her mother, Nancy Griewahn, 85, who received a medal and a gold laurel wreath for achieving the Centurian reading level within the Guild of the Seven Seals, at the 2014 Chautauqua Literary and Scientific Circle Recognition Day ceremony on Aug. 6 in the Hall of Philosophy.

If Recognition Day is like a Roman triumph, then Nancy Griewahn, 85, might just be its glorious general.

Or a Centurion, at least.

Now that she’s read more than 120 books during her time with the Chautauqua Literary and Scientific Circle, Griewahn has achieved the highest rank in the Guild of Seven Seals, which serves as the graduate degree of the CLSC.

The organization is split into four levels. The first is for basic membership, which entails reading 14 additional CLSC books beyond the 12 required for initial graduation — a total of 26 books. The other levels are Parnassian, Olympian and Centurion, all of which require even higher totals.

“I had gotten to the point that, in order to finish, I was reading one to two books a day,” Griewahn said. “I was coming to the library at that point — they were so helpful. And I was picking up books and bringing them back and forth from Erie. They were terrific.”

Griewahn has been involved with the CLSC since the 1960s. When asked when she first joined the CLSC, Griewahn’s response was simple.

Griewahn said that joining the CLSC and continuing her commitment to it has “meant a great deal to her.” She said things were much different when she first joined — members had to write reports on what they read in order to graduate.

“But I don’t know who ever read those reports,” Griewahn said with a laugh.

Griewahn has used the CLSC as a means of continuing her education, which was the organization’s original intent.

Leslie Gurney, Griewahn’s daughter, said that Griewahn’s experience is a perfect example of the impact that the CLSC can have on a person.

“The CLSC, when it was founded, was an opportunity for people across the U.S., regardless of their background, to achieve fundamental and higher education,” Gurney said. “Whether you were a farmer’s wife in Iowa — whatever your background was, you had that same opportunity.”

This was true for Griewahn, who left college to start a family — something that she has never regretted. She was able to pass her love of reading on to her children.

Gurney said that her mother’s reading appetite is “voracious.” It’s an attitude, Gurney said, Griewahn instilled in her children.

“In our home when we were growing up … the walls in our home were lined with bookshelves, and it was marvelous the variety that we had to choose from,” Gurney said. “And then growing up here in Chautauqua, going to Boys’ and Girls’ Club, we were always reading, so that was marvelous, too.”

Gurney said that her mother’s love for reading was a rare gift for her as a child.

“By making the investment in those books and in our home, she made reading available to us, which a lot of children don’t have these days,” Gurney said.

Griewahn agreed, and mentioned her granddaughter, who helped get more than 400 books together for underprivileged children as part of a vacation Bible school project. Griewahn said her granddaughter’s actions made her proud.

“I just think it’s so meaningful for a child to have a book of their own,” Griewahn said.

Reading and Chautauqua have been intertwined for Griewahn’s family for generations. Griewahn described herself and her family as lifelong Chautauquans.

“My grandmother came here when you used to have to get out of the car in Mayville and walk up if you had a lot of luggage,” Griewahn said. “And my mother came — my family has come here for generations. My four children were raised here as well. They still come back.”

The CLSC has also brought Griewahn and Gurney closer together.

“My mother graduated in 2009 with me, so I got to walk beside her on the brick walk in the procession,” Gurney said. “That was an honor. We couldn’t be more supportive or proud of her.”

Griewahn’s dedication has also inspired Gurney to continue in her commitment to the CLSC. Gurney achieved the Olympian rank this year.

“Before, I never thought I would ever go anything beyond the original, basic CLSC recognition,” Gurney said. “Now that my mom’s inspired me, I can’t imagine giving up at this point. I’m going to shoot for it and make sure I achieve it.”

Gurney said that the influence that the CLSC has had on her mother is amazing, and that is why it is such an important part of Chautauqua: it can change someone’s life.

“My mom’s been on that same journey,” Gurney said. “She started college at Thiel (College), but then, with life, she went another route — to have a family. And she didn’t make it back to Thiel. But in some ways, she’s had a more extraordinary education as a result of it. And to me, that epitomizes the CLSC: someone’s journey like that.”