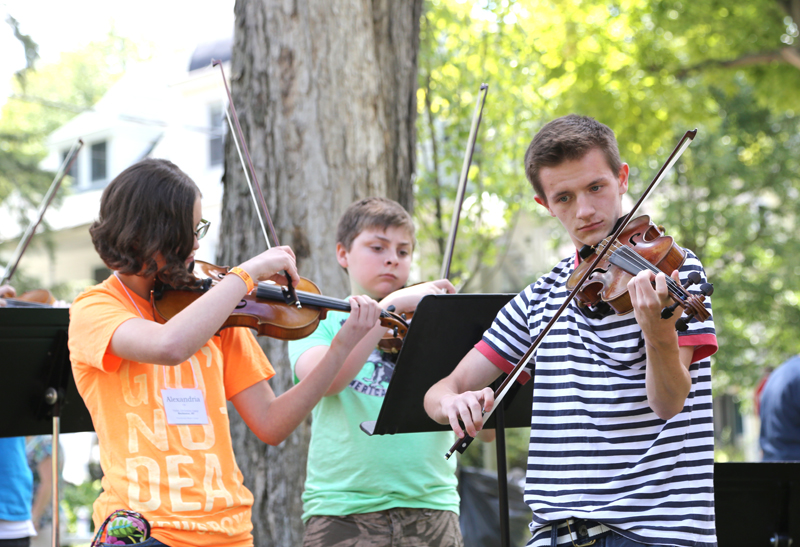 Whether they’ve been on the grounds for 24 hours, days or years, Chautauqua Institution represents many different things to different people.

It’s unlikely, though, that anyone has ever articulated what a jogger muttered Wednesday afternoon as he took a breather on a bench near McKnight Hall: “Are they shooting one of those ‘Honey, I Shrunk the Kids’ movies here?” he said.

Not quite; rather, with the Music School Festival Orchestra having concluded its performance season Monday, the music campus has played host to the 17th annual Chautauqua Music Camps.

The camp culminates on Friday and Saturday in a series of concerts put on by each faction of the program. Saturday’s performances feature the string orchestra and chamber music ensembles at 11 a.m. and the middle school band at 12:30 p.m. in Lenna Hall.

Led by Camp Director Peter Lindblom, Head Administrator Marcy Bacon and her husband, Terry, the program offers middle and high school students an intense music experience featuring everything from jazz improvisation to the musicianship required to be a chamber musician.

Terry Bacon, a music teacher for the Churchville-Chili Central School District in northwestern New York, said that kids who attend the camp receive instruction that is, unfortunately, more unique than it should be.

“We simply can’t do this, nor can they experience anything like this in public school,” he said. “Testing rules it all; if it can’t be tested, people think it’s not worth having. There have been enough studies now that [show] the positive impact of early music education is unquestionable.”

This year introduces a chamber music program, one founded in order to offer middle school campers who have outgrown that band an opportunity to continue their classical training in Chautauqua.

Marcy Bacon instituted an audition process for her chamber camp — the other three options are open to anyone who is interested — due to the specific makeup of chamber music ensembles.

“If you’re going to have a brass ensemble or a woodwind quintet, there’s generally a standard roster the music assumes to be there,” she said.

Ultimately, the audition format of students submitting recorded performances proved more an intangible selection process than what was on their tapes.

“Students who believe they’re good enough to audition will send in their applications, while those who are on the fence or unsure may not,” Marcy Bacon said. “We found a spot for all 12 who auditioned.”

The Bacons have been involved in the camp for all but its first year. They’ve seen many a camper blossom into talented musicians — some who return years later as instructors from the Eastman School of Music or other elite conservatories.

Each year, the camp runs the length of Week Eight, and Terry Bacon knows that while the schedule demands more of the kids than many other summer camps for their age group, the benefits vastly outweigh the costs.

Each student receives a gate pass for the week as part of their $200 tuition — a figure Terry Bacon said could never fund a week’s worth of activity without the generosity of Institution leadership and the Dibert Foundation.

More than any dollar value, he said, it’s the all-around Chautauqua environment that makes the camp so successful year after year.

“The physical space we’re afforded alone is just stunning,” he said. “We have graduate students and professional instructors playing alongside fourth-graders in symphony rehearsal without anyone batting an eye. The age doesn’t matter here. We speak in the common language of music.”