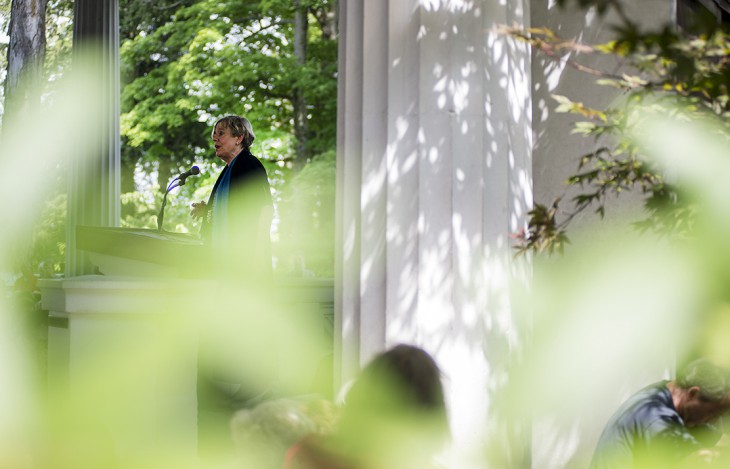 Rachael Le Goubin | Staff Photographer
Karen Armstrong, author of Fields of Blood, spoke about how human impulses and cultural tendencies toward violence during her Interfaith Lecture Tuesday in the Hall of Philosophy.

Chautauqua Institution is a privileged place — neighbors can leave their doors unlocked and children can play in the streets with no one worries and no crime. But outside of these gates, Karen Armstrong said, and outside of other privileged places in the United States and Great Britain, violence rages on.

Armstrong, author of Fields of Blood: Religion and the History of Violence and numerous other books on religious affairs, spoke about violence — its instinctual presence in humankind and its historical beginnings — and its relation to religion and politics in her 2 p.m. Interfaith Lecture Tuesday in the Hall of Philosophy, “Religion and the History of Violence.” Week Eight’s lecture theme is “The Global Public Religious Square.”

Armstrong began her speech with the story of Cain and Abel in the book of Genesis. Cain, who cultivated the land, was not rewarded for the gifts he presented God, while God gladly accepted the gifts that Abel, who herded sheep, gave him. Cain took Abel out into the field and killed him, but when God asked Cain where his brother was, he told him he didn’t know — he wasn’t Abel’s babysitter.

When there is mass violence in the world, Armstrong said, “as we fight our wars, we must hear God’s question to us. ‘Where is your brother?’ And ‘Hark, your brother’s blood is crying to me from the soil.’”

There’s a common misconception that religion is the cause of major violence in the world, Armstrong said.

“People make statements quite dogmatically that religion — my favorite one of this, I’ve not just heard this in Chautauqua but on the lips of taxi drivers, academics and psychiatrists — religion has been the cause of all the major wars in history. An odd remark,” she said. “The two world wars clearly were not caused by religion, but by national fervor.”

Politicians and people in power look at religious wars taking place in other nations and leaf through history with an attitude “of unimpeachable righteousness, as though they were not guilty of such crimes themselves,” Armstrong said.

A separation of church and state has not erased the violence, though.

“Military historians and terrorism experts tell us that by far the largest, by far the institution most responsible for the killing of most civilians has been the state,” she said.

What humanity needs to do, Armstrong said, is to ask itself “who is our brother?”

In a practical sense, the new global age has created an international marketplace, in which all nations are interconnected. Countries across the globe are now economically linked. When the stock market falls in one place, markets suffer in another. When there is unrest in the Middle East, other countries feel a ripple effect, she said.

From an internal sense, and drawing from the sentiments of Confucius and Gandhi, Armstrong said that, at humankind’s core, everyone is the same. Society creates the idea of enemies, but in reality, society is all one.

Now that violence can be seen on a global scale, Armstrong said she believes it’s important to confront the realities of the bloodshed.

“We have to understand that we are implicated in all this. And as we sit here in Chautauqua, let us sometimes let the pain in,” Armstrong said. “Let the pain in as we sit — let it disturb us.”

The job then, she said, is to ask bigger questions and determine what religion should be bringing to the table in this world of violence.

Remembering that society is interconnected and considering the pain of those deemed enemies is the first step, Armstrong said. The most important is to practice the Golden Rule, which is present, in some form, in every religious faith.

“All [versions of the Golden Rule] insist that we cannot confine our compassion to our own group, our own congenial friends or allies, or people we like. … We must extend our sympathies to the ends of the Earth,” she said.

Again, Armstrong emphasized that violence does not stem from religion. It’s an inherent impulse, passed down from ancient ancestors as a means of survival. Humankind has basic instincts to find food, protect its territory, procreate, to flee when in danger and to fight when necessary, she said.

“When the fear mechanism is raised, then you’re going to get violence of the sort that we have today,” she said.

In addition, early civilizations in the prehistoric period were raised as hunters, killing animals more than twice their size in order to eat and survive.

“These hunting bands were the seeds of our modern armies,” Armstrong said.

Despite these innate impulses and cultural tendencies toward violence, humankind also has a strong opposition to killing its own kind, Armstrong said.

Armstrong used the example of the Israelites and the Canaanites. God tells the Israelites that the land of Canaan is theirs to inhabit, and they can kill all who are already there and in their way. Later, the concept of the Good Samaritan is introduced, in which the Israelites are told to honor strangers in their midst.

After the prehistoric period, humankind began to thrive on agriculture. Armstrong said this became a time when war was necessary, because it was the only way for people and communities to acquire more land and more people to work the land — giving them more product and growing their economies.

“It was discovered by trial and error that, paradoxically, the only way to achieve peace was to keep these different warring people down with a huge hegemonic power — the empire,” Armstrong said.

The empires would rule for centuries. Warriors were stuck in what Armstrong called the “tragic dilemma” — the need to fight and defend, while hating the act of warfare.

The concept of the nation-state has also justified violence throughout the world, as it brings up cultural questions of race, ethnicity, religion and so forth, she said. Minorities are suffering in situations reminiscent of the Holocaust, and in places such as Bosnia.

Religious voices today need to cry out against the state and these violent injustices. Remember the Golden Rule, Armstrong said.

“Compassion does not mean just feeling sorry for people,” she said. “It means taking responsibility for the suffering you see in the world and working practically to assuage it.”