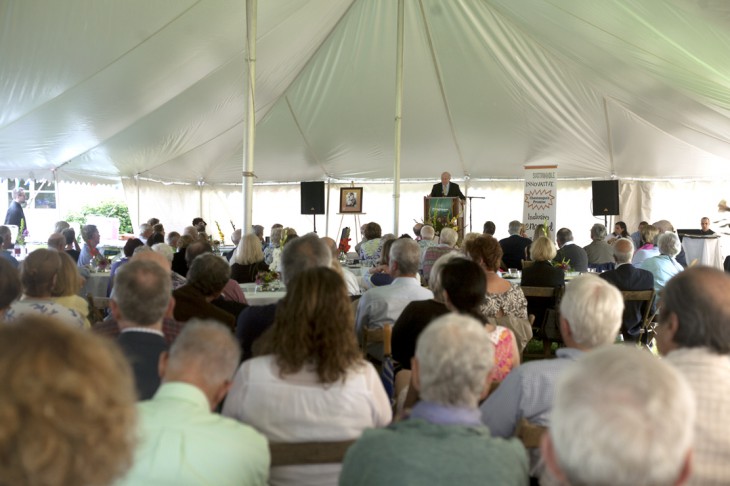 Kreable Young | Staff Photographer
Chautauqua Institution President Tom Becker addresses members of the Bestor Society at a reception on the lawn near the John R. Turney Sailing Center on Sunday.

Chautauqua Institution covers 750 acres, and traversing the grounds from its most northern to most southern points can be quite a hike. But last Sunday, members of the Bestor Society and various Chautauqua Foundation and Institution leaders made the trek to the south side of the grounds for the annual president’s address.

The event on the lawn at the John R. Turney Sailing Center was held to honor those who have supported the Institution and to allow for an evening of formal gratitude.

“This evening is one of my favorite evenings of the entire season,” said Jim Pardo, chairman of the board of trustees, as he introduced the night’s speakers. “It’s an opportunity for us at Chautauqua, those of us who are involved in the leadership of Chautauqua, to say thank you to our dearest friends and supporters. Without your gifts, without your support, we could not do the things that we do. We could not be more grateful for the things that you do for us and the things that you do for the Institution.”

He then welcomed Yvonne and Jack McCredie, co-chairs of the Chautauqua Fund, to address the audience. Yvonne McCredie recognized new members of the Bestor Society, including her daughter and son-in-law, Kevin and Elizabeth Daley, while Jack McCredie followed by announcing a new gift-matching opportunity.

Pardo then introduced Timothy Muffitt, conductor of the Music School Festival Orchestra, before the audience was treated to a brass quintet performance by some MSFO students.

Pardo then welcomed Chautauqua President Tom Becker to the podium.

Becker began his address by discussing the Chautauqua Promise within those young musicians who had just performed.

“Chautauqua is not about window dressing,” he said. “It is about the art and the artists. These are the results of our production. These are our gifts to the larger expressions of community.”

Becker described the humanity of the Institution particularly in relation to the arts.

“Chautauqua is not merely a sight, it is not just a venue and the arts at Chautauqua are not just about entertainment,” Becker said. “In Chautauqua, the reality is these artists are seen and experienced as more than their art forms. They are known as human beings. Here, they are encouraged to grow as we all are, as human beings.”

For Becker, Chautauqua’s importance and uniqueness as an Institution lies in its relational component.

“I will say to you, unapologetically, that I believe Chautauqua stands for the idea that we are and must be a nation not of consumers, but of participants engaged in the creative discourse of community building, of democratic expression. Participation is what defines Chautauqua and its promise,” he said. “The promise of this experience is growth, the ability to know ourselves, the issues of our time and the capacity to investigate beyond the surface of things to their meaning and the meaning they hold to us.”

And that idea of growth is what makes this place and its future so important for the people who experience it, Becker said.

“Chautauqua promises you an unprecedented array of resources for your engagement with growth. We believe the investment of time and resources to participate in Chautauqua during your discretionary time is a qualitative investment in this exercise,” Becker said. “It’s about what we make together as a community with the freedom of expression that is built into our bones as an institution. The freedom symbolized by a kid on a bike and a 90-year-old with a silver medallion on her gate pass. Today, we celebrate your generosity and your faith in this place.”