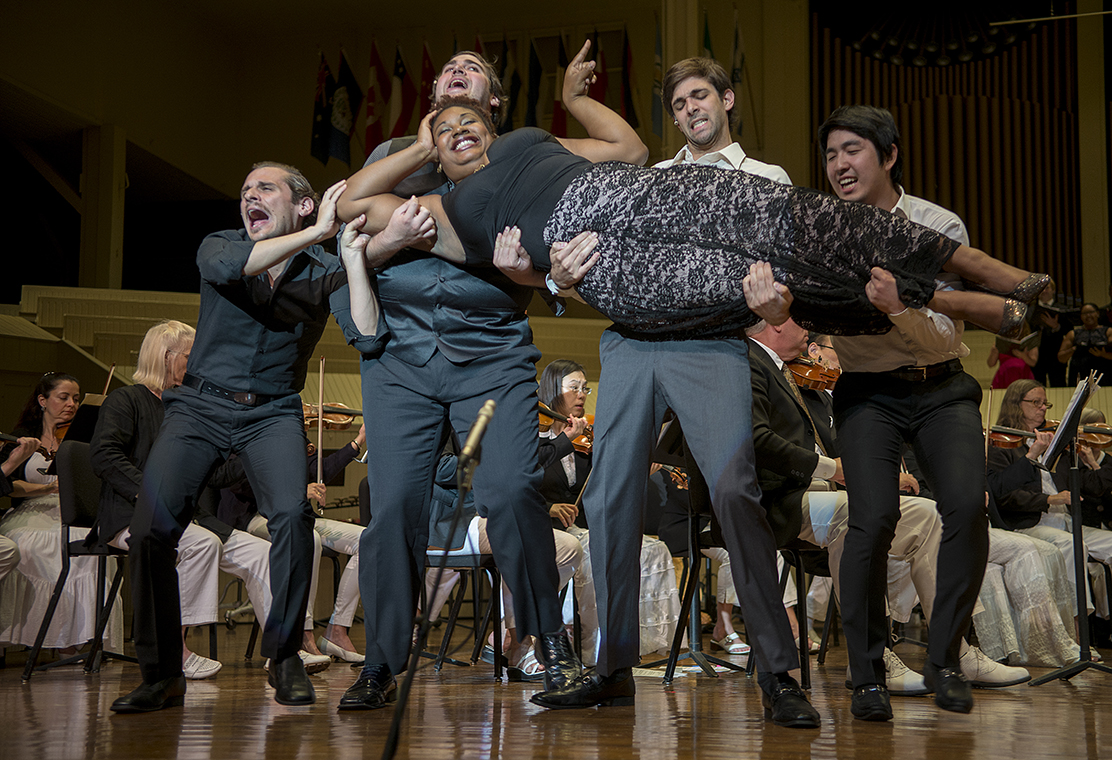 The formal goodbye from the music administrator is a yearly occasion for her students to reflect on the previous seven weeks.

“Overall, they have found this place to be encouraging and supportive,” Rausch said. “Those kinds of things are indicative of a more nurturing environment than you might find out in the big, bad world.”

By Sunday morning, all 27 opera students will have packed up their Puccini and Moore music books, “secret pal” gifts and their Chautauqua Opera 2014 shirts, and Connolly Hall will be empty. The tenors, basses, baritones, mezzos and sopranos that composed this season’s Young Artists program will soon be on to other pursuits.

But the singers will not leave without properly saying goodbye to Chautauqua.

At last Saturday’s pops concert, the Apprentice Artists sang selections from the books of Sondheim and Bernstein with General/Artistic Director Jay Lesenger as narrator and Stuart Chafetz conducting the Chautauqua Symphony Orchestra.

Lesenger began the concert by reflecting on the past 20 years that he’s been at the company’s helm.

“I can’t believe how fast it’s flown by,” he said.

Lesenger, other than reflecting on this season, reminisced on his own experience with pieces from Sondheim’s Sweeney Todd or Bernstein’s On the Town, which included anecdotes from his own theater-adoring past in Manhattan, New York. He even participated himself as Desirée Armfeldt’s former lover, Fredrik, a role not seen too often by the director.

But the show gave the Young Artists the real chance to shine.

Benjamin Bloomfield, baritone, played On the Town’s Gabey, singing “Lonely Town” as he moped around on stage with his hair slicked, hands pocketed. Bloomfield also paired with tenor Andrew Lunsford for Sondheim’s “Agony,” both pulling on their hair due to their princess wives. The Lunsford-Bloomfield duet even lingered on afterward, interrupting Lesenger at the podium. 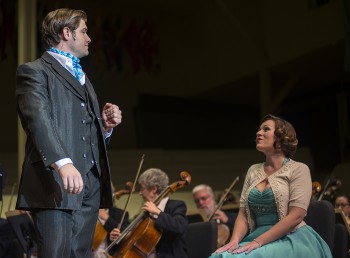 With Bernstein’s “Ya Got Me!” a fresh-faced Logan Webber received support from Cree Carrico, Brad Walker, Lunsford and Linda Brimer Barnett. Later in the show, Barnett and Carrico would each make lasting impressions on the audiences with their renditions of Sondheim pieces — Carrico with her “Send in the Clowns” and Barnett with her version of “Losing my Mind.”

It was mezzo-soprano Raehann Bryce-Davis who demonstrated her multi-accented talent, playing the “high-middle Polish-speaking” Old Lady in Bernstein’s “I Am Easily Assimilated,” as followed by her obsessing Spanish señores — Jared A. Guest, Sammy Huh, Jeremy Johnson and Brian James Myer. With Walker, Bryce-Davis humored the audience as Mrs. Lovett in Sondheim’s “A Little Priest” from Sweeney Todd, finishing the set with a rolling pin in her hand, Walker with a cleaver.

All of the Young Artists closed the show on stage by performing Sondheim’s “Sunday” from Sunday in the Park with George, leaving very few sitting in their seats by the end.

Following the concert, the entire Opera Company gathered at the Jane A. Gross Opera Center for their last post-show ceremony of the season. After Lesenger commended his artists on their final performance, pianist Keith Burton led the singers in more songs: First, his Gershwin mashup, “Our Love [Jay] Is Here To Stay.” He also debuted a song for Rausch, with an entire chorus of Young Artists who “want to sing forever” for the 25-time choral master. Burton had a good reason for writing the piece.

After Burton’s set at the piano, Lesenger dished out his final praise of the summer, for the crew that “made Butterfly so special” along with the “energy” they transferred onto the stage. Lesenger followed up with individually thanking staff members like “best costume designer around” B.G FitzGerald, masterful scheduler Rick Hoffenberg, longtime pianist Miriam Charney and fellow 20-year staff member and friend, Michael Baumgarten.

“I promise to work for world peace,” Baumgarten said as he took the bouquet of flowers from Lesenger.

Charney added her own appreciation for another season, mentioning the Young Artists she got to know well.

“You think things are going to be the same every year, but they’re different because the people are different,” she said. “And that’s the reason for coming back.”

Lesenger then thanked the Opera Guild, including presidents Virginia DiPucci and Melissa Orlov, for their contributions to the company and support of the Young Artists program. Other than providing all the Artists with memberships to OPERA America, the Guild handed out $15,000 in awards to select singers for their outstanding work this season.

Even as the Young Artists were on the eve of the season’s end, the future was ripe on their minds.

Singers like Brandon Coleman do not let a potential two-week hiatus go unused. A day after his departure from Chautauqua, Coleman had an audition lined up in Toronto. In the meantime, he will rehearse for his upcoming role as Sparafucile in Giuseppe Verdi’s Rigoletto at Tri-Cities Opera.

This doesn’t mean he’s already forgotten about his time at Chautauqua.

“It’s probably not going to hit me until I drive through the gate for the last time,” Coleman said.

Rachael Le Goubin | Staff Photographer
Raehanne Bryce-Davis and Nicole Haslett sing “A Boy Like That” from West Side Story.

And yet there are many singers who could use a break. Several said they were hoping to rest and recharge while seeing loved ones. Lunsford, whose wife,
Kenya, and two boys, Max and Colin, flew in from Bloomington, Colorado, said that the last few days leading up to the finale were the hardest.

“It’s just great to be with my family now,” he said, as his two boys wrapped their arms around the 35-year-old tenor.

Others, like Rebekah Howell and Caitlin Bolden, realized that they would have to leave their new, summer season family — Howell especially.

“I don’t know if I’m ready to leave yet,” she said. “I’m just going to miss all these guys so much.”

Bolden, looking around the room at all the friendly goodbyes and future planned connections, sees such an end to an eventful, educational season to be rightfully emotional.

“It’s just like the end of an opera,” she said.

This fall, Rausch will return to New York City with Lesenger to once again narrow down 700 applicants to a lineup of 27 for 2015’s program. She said that the Opera Company encourages “staying in touch” with former artists, even acting as a “support group” for career decisions down the road. Many singers, because of the kinship they found at Chautauqua, she said, find it welcoming to turn to their former directors — their mentors.

Although it’s not easy for Rausch to say goodbye to her students, she said that, after the seven-week program, the singers are ready to move on to the next stages in their careers.

“There’s a certain sadness to letting it go,” she said. “But there’s also a need to let it go.”

And now, until next June, all the rehearsal rooms at the opera center will remain vacant, the strings of the pianos still. The 27 dorm rooms of Connolly Hall will sit without scattered sheet music, Pepsi cans and ruffled bedsheets. And the great curtain of Norton Hall will remain folded on the stage until it rises once again with a new season of opera in 2015 with another troupe of Young Artists.