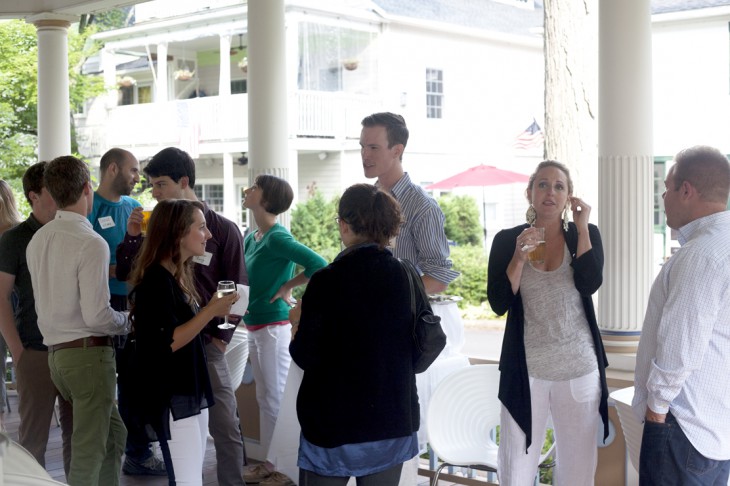 Kreable Young | Staff Photographer
The gallery reception hosted by The Now Generation, made up of Chautauquans aged 21 to 40, was meant to allow younger Chautauquans to come together to experience art.

Throughout the summer, the NOW Generation, made up of Chautauquans aged 21 to 40, has been hosting a variety of events for young individuals and families. Last Wednesday, the NOW Gen gathered at Fowler-Kellogg Art Center for a gallery reception and exclusive tour of the School of Art’s Annual Student Exhibition.

“I’ve lived across the street from Fowler-Kellogg forever and don’t really ever come in,” said NOW Gen Advisory Council member Russell Bermel. “But this event is a nice moment for all of our friends to come together mid-week, take a tour and see what it has to offer.”

During the off-season, Bermel said, it can “be difficult to envision how all of this will come together, but for me, being here and at other things that we’ve done this summer have been proof positive of how great [the NOW Gen] is, how important the work is and how grateful we all are to be a part of it.”

For Bermel, the best part about being involved in the NOW Gen has been the positive feedback from Chautauqua and the administration.

Bermel said NOW Gen offered him an opportunity to be involved in Chautauqua as a young adult after going through and working as a counselor for Boys’ and Girls’ Club on the grounds.

“We’re still very active,” Bermel said. “We want to be involved. I think we understand the tradition of Chautauqua and we want to preserve that, but also recognize that it’s ever-evolving and it’s modernizing in front of our eyes and we want to be a part of that.”

Representing the School of Art at the event was Matthew Smith, who works in the ceramics studio as a kiln technician. Smith was a student at Chautauqua in 2007 and 2012, and has been back for the past two summers as an employee. He emphasized that, regardless of age, every member of the Chautauqua community has something to offer the Institution’s culture.

“Everybody is bringing something to the table, so with the NOW Generation, they’re going to bring something that’s very unique,” Smith said. “People between 21 and 40 have a different idea and a different vision about what this place will be, what it will offer, and that’s going to be important for the Institution’s future.”

After enjoying cocktails and appetizers on the gallery’s porch, those in attendance were invited inside for the final tour of the student show.

“What’s really nice is we have a student exhibition up tonight and it closes tomorrow,” said Judy Barie, galleries director, as she welcomed the guests. “We’re really happy that we could have the NOW Generation here to experience the gallery.