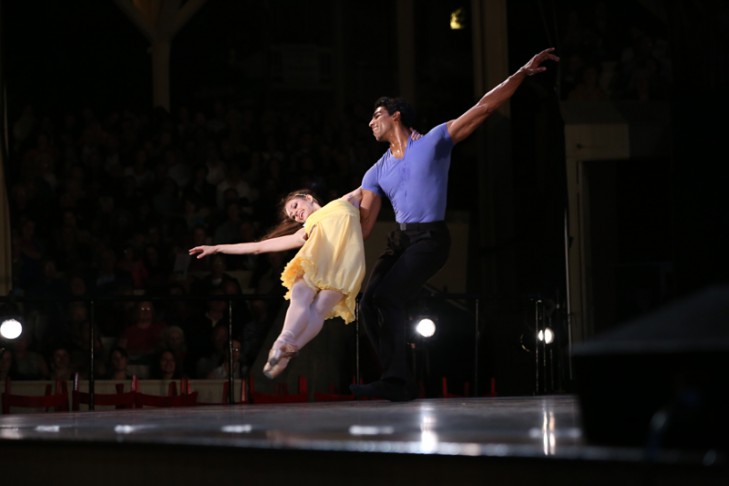 Brian Smith | Daily file photo
Anna Gerberich and Pete Leo Walker, principal dancers of the Charlotte Ballet, partner as the leading roles during The Romeo & Juliet Project in 2013. Walker and Gerberich will speak about partnering as a real-life couple at 3:30 p.m. today in the Hall of Christ.

Dancers don’t always have to be romantically invested in their partners to create a beautiful ballet pairing. But according to Anna Gerberich and Pete Leo Walker, principal dancers of the Charlotte Ballet and real-life power couple, it certainly doesn’t hurt.

With two years of experience in navigating the professional and personal worlds of dance side by side, Gerberich and Walker are the perfect candidates to speak at the Chautauqua Dance Circle’s next lecture, “Dance, Romance, and the Art of Partnering.” The pair will discuss the joys and struggles of partnering as a couple, as well as provide some dance demonstrations, at 3:30 p.m. today in the Hall of Christ.

The pair first met in 2010 at Chautauqua Institution, when Walker became a company member of the North Carolina Dance Theatre (which has since been renamed to the Charlotte Ballet). Although the two remained strictly platonic for two years, Gerberich admits that she was always eager to be paired with Walker.

“I just loved dancing with him, so I’d be like, ‘Can I dance with that one?’ ” she said. “The timing just worked out, and we finally got to explore the romance side of it. But we worked really well as partners first.”

Since they started dating two years ago, Gerberich and Walker’s partnership on the dance floor has only grown. Both agree that their romance adds another dimension to partner work: it translates into tangible, organic chemistry, a level of comfort and, above all else, trust.

“Of course, I love dancing with other people in the company, but there’s no one else I’d rather dance with than Pete,” Gerberich said. “I know what he’s going to do next, and I know we instantly have that chemistry and that connection.”

Both dancers admitted, however, that dancing with a significant other is not always sunshine and rainbows. According to Gerberich, it is often easy to blur the line between their professional and personal lives. She said they need to set limits for themselves in order to avoid bringing their work home with them.

“I think you have to remember the professional side of it, because it’s so easy to — in the middle of a partnership — call out the other one if maybe something goes wrong,” Walker said. “It’s a little easier to get in that gray area. So I think keeping that professionalism has helped us not to bang heads.”

Apart from their unique situation as both a professional and personal, public and private couple, Gerberich and Walker also plan to speak more generally about the art of partnering at today’s lecture. Since each approaches the topic from a different perspective — one female, one male — they plan to address two sides of the same coin.

“For a guy, I guess the most important part of partnering is trust and communication,” Walker said. “You need that level of communication with your partner, and I think you need to establish that on day one. There’s always that kind of ice-breaking moment where you have to be very straightforward, because everyone’s different and everyone has different requirements.”

While Gerberich agreed that trust and communication are vital from the woman’s point of view as well, she said that there are two other essential ingredients that the female dancer must bring to a successful partnership: comfort and courage.

“As young girls, it’s a little funny the first time guys are putting their hands all over you, and you’re not used to it,” Gerberich said. “You have to get used to being touched. You learn that it’s just your job, and you get comfortable. I also feel that, as a woman, the first time you’re doing a big lift you get scared and retract. That’s actually worse, because that’s how things go wrong. I’ve learned through the years that you have to be fearless.”

Gerberich and Walker are both excited to have the opportunity to speak at today’s lecture. They said they are looking forward to live dialogue and interaction with the Chautauqua community. Walker said he particularly appreciates the amity he feels from Chautauquans, and the way people have supported him and Gerberich as a couple throughout the years.

“Chautauqua’s a good home,” Walker said. “People know us as a partnership here — it’s not, ‘Oh, there’s Pete Walker! Oh, there’s Anna Gerberich!’ It’s, ‘Oh, it’s Pete and Anna!’ I like having that kind of camaraderie. It’s been a journey for both of us, I think on both sides — the audience and the artists.”

Gerberich agreed, saying that it seems fitting to give a talk on dance and romance in the place where their love first began.

“It’s cool to be doing this here, because this is where we started dating,” she said. “It’s like coming full-circle.”