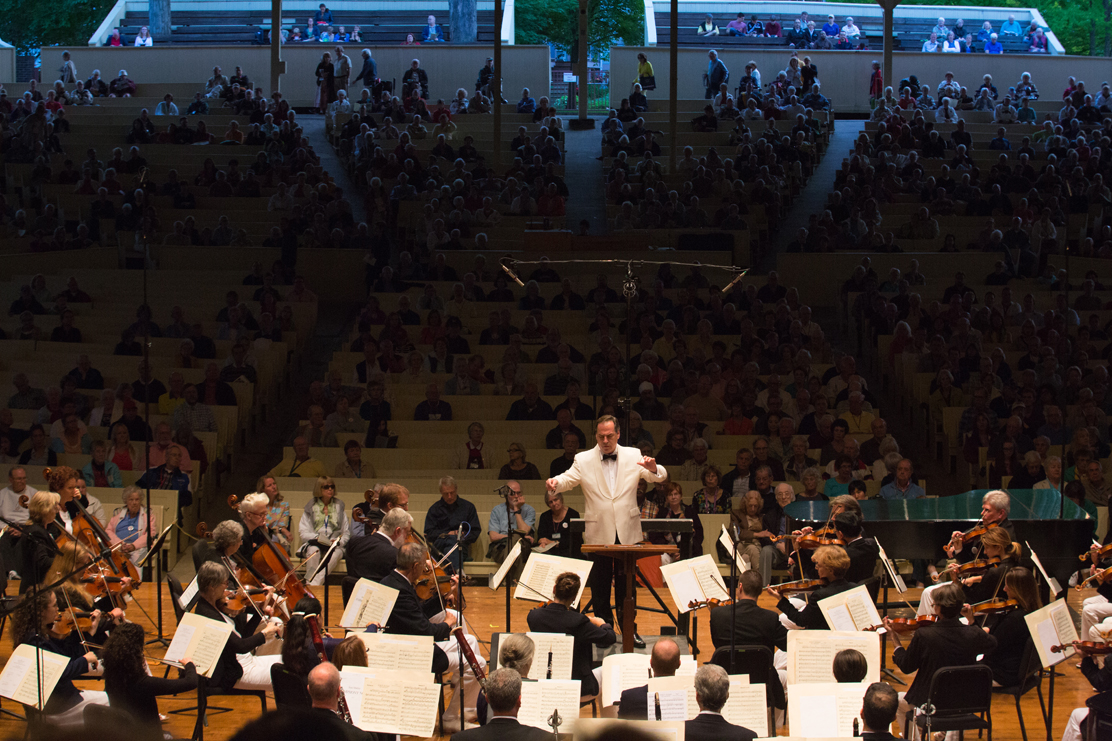 Maximiano Valdés led a big-picture evening Thursday in the Amphitheater. He continued his call for an understanding of the cultures of international achievement — a signature element in his work as a musical director for orchestras and workshops around the world.

Pyotr Ilyich Tchaikovsky stood — still stands — for Russia, and Tchaikovsky paints big, like the great outdoors of his country. And he can get very loud (1812 Overture) or very soft (Symphony No. 6 in B Minor, Op. 74, “Pathétique”) about it.

Jean Sibelius stood — still stands — for Finland, and he thinks big, summoning both demons and angels into his work, wrestling with cultural, spiritual and emotional complexity.

Samuel Barber, the American, set the pitch for the night, for this was a considerable evening with the Chautauqua Symphony Orchestra. Barber began things. A leading cultural intellectual of the 20th century, Barber created rich-toned, thoughtful music for orchestra, piano and voice, establishing propositions — “essays,” he called them — for experience. His Essay No. 1, first performed with his famous “Adagio (once titled “An Essay”) for Strings” began the evening — in search of a theme and its fulfillment.

Moreover, it was the night for the young Ukrainian-born, Russian phenom Stanislav Khristenko, a graduate of the Moscow State Tchaikovsky Conservatory who also holds a 2010 diploma from the Cleveland Institute of Music and the first prize in last year’s Cleveland International Piano Competition, which carries with it a tour of which Chautauqua is a part. He took on Tchaikovsky’s milestone, Piano Concerto No. 1, Op. 23 in B-flat Minor, and earned a whooping, foot-stomping, standing recognition.

Actually, it was a two-whoop evening, a rarity in Chautauqua, though earned Thursday for Sibelius’ difficult Symphony No. 5, Op. 82, in E Flat. That one was merited by razor sharp work from the CSO and Valdés, not an easy achievement given the complexity of following the variety of orchestral shadings and tempi as a simple horn call unravels throughout the piece. But more later.

The Chautauqua love affair was with the young Khristenko, in business suit and red tie, who beamed with his hands clasped in appreciation for his audience’s thunderous applause. His grand sounds — more than you’d think the instrument could deliver — were set up by the delicacy of his establishing work, in those moments following the well-known introductory chords, moments later when Khristenko tamed the piano.

Quietly he played, then more so — just as one expected more assertion — then just a singular note, and another, isolated, and then another, merging finally into pianissimo with the reentering orchestra.

Those were the moments, one at a time, that were his prize winners, that made time fly. Before you knew it, sadly, the concerto was over.

The concerto is among the grand slams of the language — not only the language of music — the any language that makes sense of what it means to be alive. And the same goes for the Sibelius symphony, though in a somewhat different way.

Tchaikovsky’s four-note introduction from the piano, brought to fame in 1958 by Van Cliburn in the midst of the Cold War, captured for America the first prize in a Moscow competition. From that, Cliburn created the first classical record album to sell 1 million copies and reach the platinum certification level. As well, the four notes that had spurred World War II fundraising and opened the 1980 Moscow Olympics also closed the Russian Winter Olympics earlier this year.

The work continues its international harmonies today as the early assertion of the four chords yields to a Ukrainian folk tune whose melody weaves through the concerto — at first with a dominating presence for the piano. Valdés holds the orchestra back at a respectful distance as the young pianist, crouching over the piano with an accountant’s intensity, keeps track of the flurry of notes that emerge, and then rears back in the ecstasy of the crescendo which, for example, marks passage out of the second movement with fireworks from the slashing strings and explosions from the piano and orchestra. You’d have thought he was a good old time rocker — Little Richard, Fats Domino, Jerry Lee — the way he was going at it.

I promised myself to never use the word “delicious” in describing music, but the thought occurred this time. With Valdés and Khristenko, this was more soberly like the alternation of a gallery of paintings that use an image language of scale to high advantage — not usually a factor that dominates over consideration of light and line. Likewise here, the dynamics of sound, the aesthetics of amplitude step up to take their measure, firm hands on the lever fully necessary.

What can there be after this second movement? Only more delicacy from the piano to establish the triumph of the next movement leading toward a magnificent, concluding climax — orchestra now fully indicted — an enchantment, an Alhambra of sensory excess. Folk ballads played like tunes for a child that become palaces of sound; dance hall hurdy gurdy that becomes a garland excess of flowers. A controlled indulgence, but not delicious.

As Tchaikovsky flirts his way through the concerto, Sibelius issues in his symphony a call as if from an outer place: “I am here. Do you hear me? Do you understand?” A commission for his 50th birthday, the Symphony No. 5 has become the clarion of a nation, and in its romantic melodies the heartland of a mystic North. Artists such as Charles Burchfield from Northern Ohio and Western New York, who loved nature and found in the four seasons a presence of a higher power, have declared this symphony a masterwork of belief.

Written against the backdrop of World War I, it was characterized as “an act of faith.” Said Burchfield: “What a magnificent genius is Sibelius,” and went ahead to create visualizations of his beloved horn call for this symphony. (Burchfield’s work and writing are now on view in Strohl Art Center on Wythe).

The horn passage is all important, and the French horns have rarely been better as a group. Valdés called them out first in class during the bows. Back and forth they played with the violins, always filled with the romance of melody, or they sent the call to others — as the strings played a steady state tremolo.

“Move on,” one’s mind encourages. Yet the calls, interrupted with another motif or passages of songs, repeat and repeat, in variations and different voices. It is a haunt, and as a spiritual man, perhaps a reach to a state for which the composer yearned to know more.

The symphony’s three movement, changing tempo at least three times, often present antipodes, collision courses the orchestra and conductor must navigate. The point is there is a good bit of chatter, of plucked strings and tremolo, as one strains to hear the dominant theme, get the message, always an undercurrent, if not undertow. Veering off, returning, building through the instrument clusters, the symphony finally can sustain no more, and it ends, in the dissonance of six massive chords, bold strokes, then silence, and again, and again, silence, and again, until complete, and the audience shouted its pleasure.

Anthony Bannon is the executive director of the Burchfield Penney Art Center at SUNY Buffalo State and research professor at the college. He had been an art writer for The Buffalo News and a series of national magazines, and served for 16 years as director of the George Eastman House in Rochester, New York.