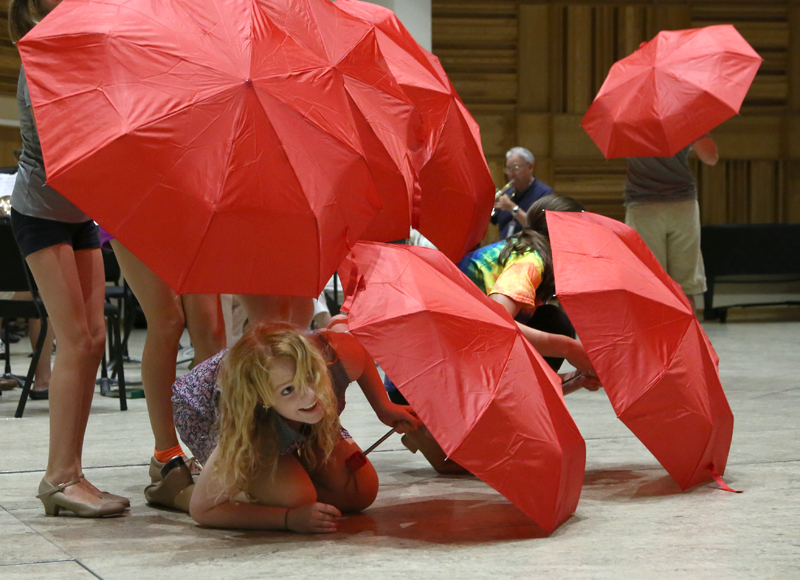 Junior Guilders in flapper dresses, vests, cheerleading and gymnastics uniforms, and red, white and blue attire will tap dance, somersault, sashay and sing across the Amphitheater stage in their summer performance, Our World.

The program will take place at 2:30 p.m. Sunday in the Amp and will feature the Junior Guilders of the Lucille Ball Little Theatre, consisting of about 35 boys and girls between the ages of 8 and 16.

Our World will open with “And the World Goes Round,” written by songwriting team John Kander and Fred Ebb.

Helen Merrill, director of the Junior Guilders, said the show “talks about the fact that in the entire world there are many, many people. And they’re all different and special and they’re all strangers — but wouldn’t it be nice if we all met and made them friends?”

This theme continues into the next number, “Yes,” a song that Merrill said spreads a contagious message of positivity. It’s also a song the group had to work hard to master.

“It’s very wordy. There’s a lot of lyrics, and the kids looked at me like, ‘Ugh.’ And they move around the stage quite a bit. But now they love it,” she said. “It’s elevated everybody so they have a more positive attitude, I think.”

Months of work go into the preparation for this show, Merrill said. The guilders started learning some of the songs in January, but the effort will be worth it when the kids get to walk onto the Amp stage.

“We had a sleepover during [an] intensive week getting ready for the show, and we showed one of the previous Chautauquan performances,” Merrill said. “[The kids] were just so thrilled to see it. They kept saying, ‘Oh, it is a big stage!’ and, ‘Oh I can’t wait to get there!’ I love to watch the little 8-year-olds step out there for the first time. You can see it right in their faces with all the seats in front of them — it’s a big honor.”

The show will include four costume changes. After the opening section, the guilders will step back into the 1920s — a treat because they all love the music and the clothing of the time period, Merrill said. Next, they will celebrate being a kid in America in their cheerleading outfits, breaking out their acrobatic and gymnastic skills.

That patriotic theme will transcend into the closing section. Merrill said they will honor servicemen from all of the country’s wars and honor the women who were left behind as their husbands and sons went to fight for America.

“Our aim is that we would like to have peace,” she said. “We think peace can come through music, because it’s a language that everybody understands. So we have a lot of songs related to that, and although we’re children, we think we can make a lasting impression and we do have a definite opinion on it.”

Our World will also include four guest performers, including Tiffany Wakeley Heintzman, the show’s choreographer and a former guilder, and Holly Jones Weston, who’s also a former guilder and helps Heintzman with the choreography. Junior Guilders will be spotlighted with their own solos throughout the performance as well.

“There are going to be places where the audience is going to cry, they’re going to laugh and they’re definitely going to be touched in the heart,” Merrill said. “And I think once you’ve made an audience [do all that], then I think we’ve done our job.”