Guest conductor Maximiano Valdés makes his second appearance this season with the Chautauqua Symphony Orchestra at 8:15 p.m. tonight in the Amphitheater.

The Chilean-born candidate for the open conductor position will be joined onstage by Ukrainian-born piano soloist Stanislav Khristenko.

Khristenko is making his Chautauqua debut as part of his tour as the winner of the 2013 Cleveland International Piano Competition.

He shined in Cleveland with a rendition of Johannes Brahms’ Piano Concerto No. 1, which The Plain Dealer recognized for its “shimmering filigree and phrases of exquisite tenderness, in which every note mattered.”

Khristenko will be performing Pyotr Ilyich Tchaikovsky’s Piano Concerto No. 1, Op. 23 in B-Flat Minor, as the second of three pieces on tonight’s program. 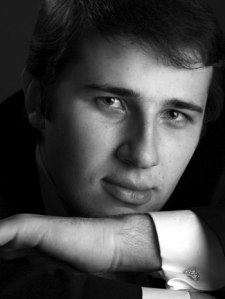 “I have a few pieces in my repertoire that conductors can choose from,” he said. “For this concert, this was the best choice. It’s one of the most famous and well-liked pieces in the piano repertoire.”

The other two compositions selected by Valdés for the concert are Samuel Barber’s Essay No. 1, Op. 12, and Jean Sibelius’ Symphony No. 5, Op. 82 in E-flat Major.

“Because I’m later in the season, there isn’t a lot of repertoire for me to choose from,” Valdés said. “It’s a general rule with most symphonies to not repeat a piece for at least two years.”

Despite his limited arsenal, Valdés is happy with the program he’s devised for tonight. He considers not only this concert but Tuesday’s as well to be a “diverse examining of national identities.”

The most striking tale of national pride comes via Sibelius’ score, a musical journey through Finnish history commissioned by its government in honor of Sibelius’ 50th birthday.

“It’s a total embodiment of Finnish music,” Valdés said. “It deals with Finland’s search for and feeling of a national sense of ownership. It’s a meaningful symbol of the history of the early 1900s.”

Concert attendees will also get a taste of America’s musical identity through the Barber piece Valdés describes as “fresh” and “a wonderful moment in American history.”

“This particular Barber doesn’t get played as often as some of his other compositions,” he said. “It was written before his famous ‘Adagio for Strings.’ It’s a glimpse at America’s longing for a greater identity at that time.”

As Valdés wraps up his audition process with the CSO, he’s hopeful that community members see much more of him in the coming years.

He’s also proud that his concerts showcase a wide range of music, and is hopeful they will leave a lasting impression with concertgoers.

“There is a well-documented crisis of audience and appreciation all over the world when it comes to classical music,” Valdés said. “It’s important to me to not only entertain, but to show the continued value of classical music and its importance going forward.”