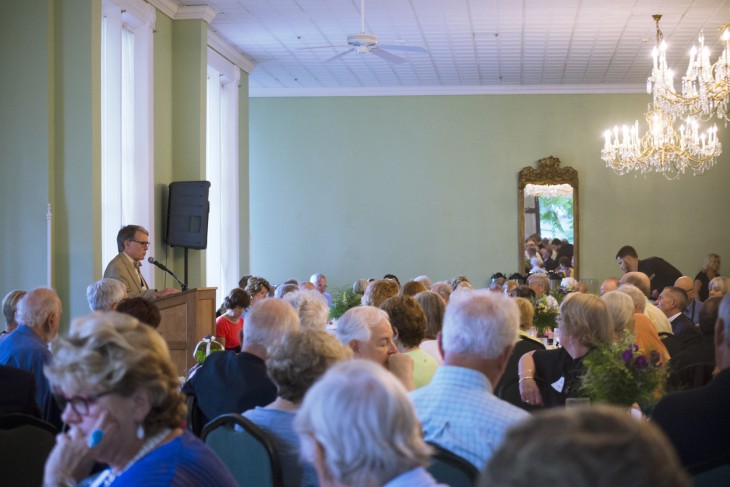 Amanda Mainguy | Staff Photographer
Geof Follansbee, vice president and CEO of the Chautauqua Foundation, addresses members of the Eleanor B. Daugherty Society gathered for the annual luncheon last Wednesday in the Athenaeum Hotel.

Last Wednesday in the Athenaeum Hotel parlor, the Chautauqua Foundation hosted the ninth annual Eleanor B. Daugherty Society Luncheon for its members.

“We’re here to honor you today, to honor your commitment to the future of Chautauqua,” said Karen Blozie, director of gift planning.

“We now have 366 members of the Daugherty Society,” Currie said. “All of you have made this commitment to the future of this amazing place we call Chautauqua.”

Following Currie was Institution Vice President and Foundation CEO Geof Follansbee, who made a point to specially note the efforts of Currie and others who work as leaders on behalf of Chautauqua.

“As both Karen and Laura have said, you represent through your actions a huge investment in the future of this institution,” Follansbee said. “We have what we call a pipeline of future gifts and, as of this year, that pipeline has grown into well over $40 million, which will, over time, be added to the Chautauqua endowment.”

Follansbee emphasized the particular importance of planned giving as a contributing factor to Chautauqua’s financial security.

“This year, over one-third, over $1 million of new assets to the Foundation have come to us through and from planned giving,” he said. “It is such a crucial part of securing our future and ensuring that this institution is here and flourishing as it is now in the years ahead.”

Members of the Daugherty Society were then audience to an exclusive speech and Q-and-A session with that morning’s lecturer, W. Richard West Jr., president and CEO of the Autry National Center of the American West.

“I take great pleasure in being here. I really feel an affinity between the work that I have done on the museum side in particular and what Chautauqua Institution is trying to do and over a long span of time,” West said. “This country — this world quite frankly — desperately needs places that are gathering spaces for the exchange of conversation, discussion, debate and even sometimes the controversial exchange. I appreciate what all of you sitting in this room have done for this institution.”